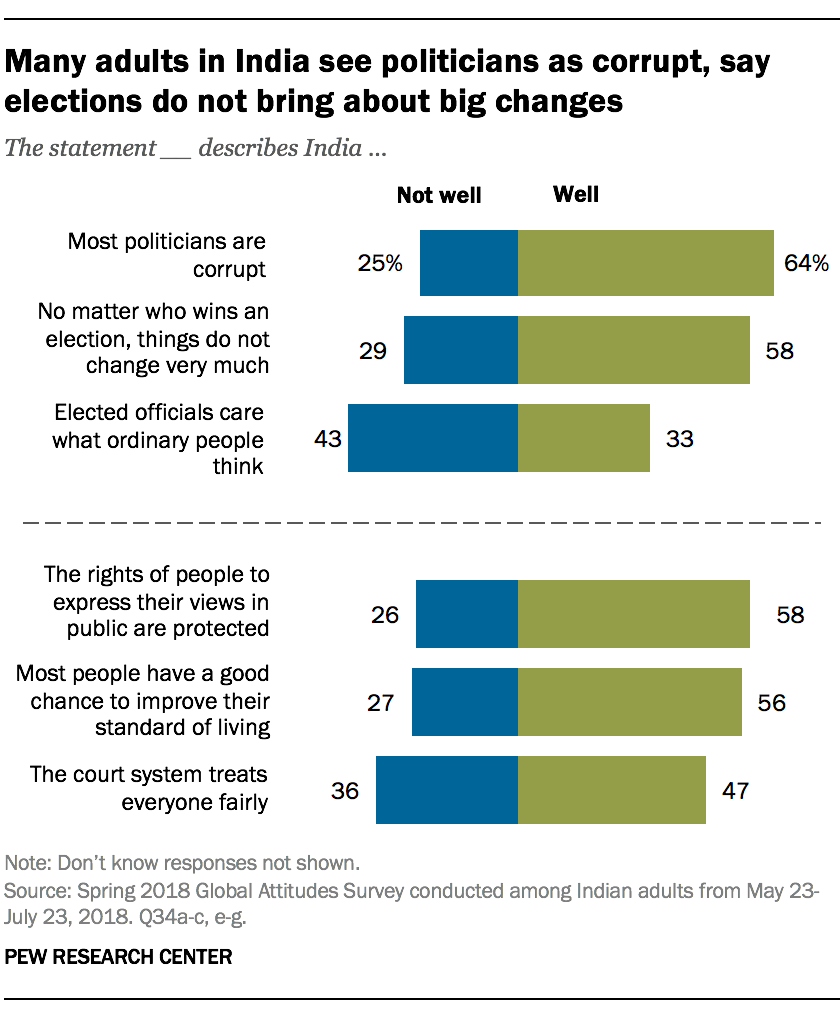 The ongoing slugfest between the BJP and opposition parties over the serial raids on opposition leaders may or may not have merits of witch-hunt. But one uncomfortable fact which is coming up before public eyes is that the Indian political system has been thrived on cash economy. Much of it, is to be blamed to the opaque political funding system in India since independence. In the veil of this opacity the personal wealth creation takes place. The fault line lies on the very fact that political parties repose responsibilities to their leaders to raise fund in a decentralized model by earmarking territory like a state or a region or even a district. This creates a fiefdom of power of the Fund-Raising-Responsible leaders and along the way some unscrupulous leaders also generate amass wealth. This system of political funding has been practiced and performed over the decades. This is the ultimate mother of all corruptions in India.

There is no denying that that political parties need funds for election campaigns and also to mobilize workers and cadres. It is another side of democracy where mass mobilization needs on-ground interventions through money, idealism alone can’t bring result. Political parties feel that money is inevitable to make a way to power. So, the darlings are the leaders who can raise funds for party.

Fund raising is an important skill, equivalent to mass leadership skill. At this situation, the leaders also feel that they also must have money power to staying afloat in the crocodile pond of Intra-Party politics. Needless to say, these attract the generation of wealth through quid-pro-quo practices, unholy nexus of Business and Politics, selling of party election tickets; all in the name of funding for the Party.  As most of the political parties, fund raising is a decentralized mechanism depending on multiple layers at leadership level, from district to state level. A sure way to rise to the top is to attach Funding nozzle to the party’s war chest. So, it become a free run for ‘corrupt but competent’ leaders who also make few hundred crores in the way. Party supremos know it all, but need to put blind eyes, as its ‘Power Ka Mamla Hai’.

Since independence, Indian Political Funding has not experienced much radical changes and it remained in the cage of old practices with a major focus to raise fund from corporate. Though few check and balances had been implemented but those were mainly motivated by the convenience of the Party in Power. The recent development was Electoral Bond Scheme introduced by Finance Act 2017 which allows anyone including corporate donate Political parties where the doner name is not mentioned in the bond, a promissory note. Along with amendment of Foreign Contribution Registration Act, 2010 in March 2018 pave way foreign companies having office in India to fund Indian Political party.

These changes may augur well for the parties which wish to cut middle man for funding by uniting the donors to its central exchequer. BJP was fast to adopt this system by shunning away the dependency on the marginal leaders for funds. These further helped them to wipe out the multiple power centres in party due to fund consolidation at the Central Exchequer of the party. Obviously, BJP has an advantage of being ‘The Party in Power’. But others parties seem slow to adopt the changes which aimed to get contribution through banking channel and relied on the old mechanism.

For a very long time, the political financing was largely dominated by Land, Liquor and Mining where the state’s revenue was doled out in exchange of favours like Change of Land Use (CLU), forgoing revenue on excise duty or royalties on Liquor and mines. Since these are areas which are very much in the ambit of discretionary power of states and quid-pro-quo actions were prevalent, mostly before election. It has been observed that this kind of funding usually happens through cash which usually got used in a systematic manner for campaign financing.  The local level political involvement was crucial as all these business verticals are based on local geography. It is quite obvious that when money comes in cash mode in an unaccounted manner, only a part of it reaches to party. Many a time, the rest can get pocketed by fund raiser leaders. Needless to say, this is the very entry -gate of criminals in politics and unscrupulous political practices. Keeping a hawk eye on these businesses by enforcement agencies along with improved regulatory business framework has reduced these quid-pro-quo practices. Nonetheless, this kind of cash still exists in Political funding.

It was expected that the introduction of Electoral Bonds would reduce this menace of opacity of political funding. But due to its nature and issuance modalities, it failed to create equitable fund distributions amongst the political parties and largely the Party-In-Power remains its main benefactor, be in State or in Centre.  The problem lies in its Disclosure norms. Electoral bond is a promissory instrument where the donor, be it individual or corporate, can be anonymous and the donee is a political party which can encashed it through its Bank Account. It’s a matter of great concern for the corporate that these bonds are issued by the State-owned bank like SBI and government can access the data, if it wishes so. It is largely feared that this anonymity is infructuous as the Party in Power become vindictive to a corporate donating to opposition parties and can push the corporate to the corner, if it resorts to cut the fund flow to the opposition parties.

India has a large electoral base and that’s why Corporates remain the biggest source of political funding since independence. Unless the issuance of electoral bonds happens through an independent and empowered agency which guarantee the anonymity of the donors to the last mile, the cash economy in political funding will not be wiped out completely. Further to it, political fund contribution under the government eye will lead to Plutocracy where large corporate can influence the public policy. This is not good news for world’s largest democracy. (IPA Service)