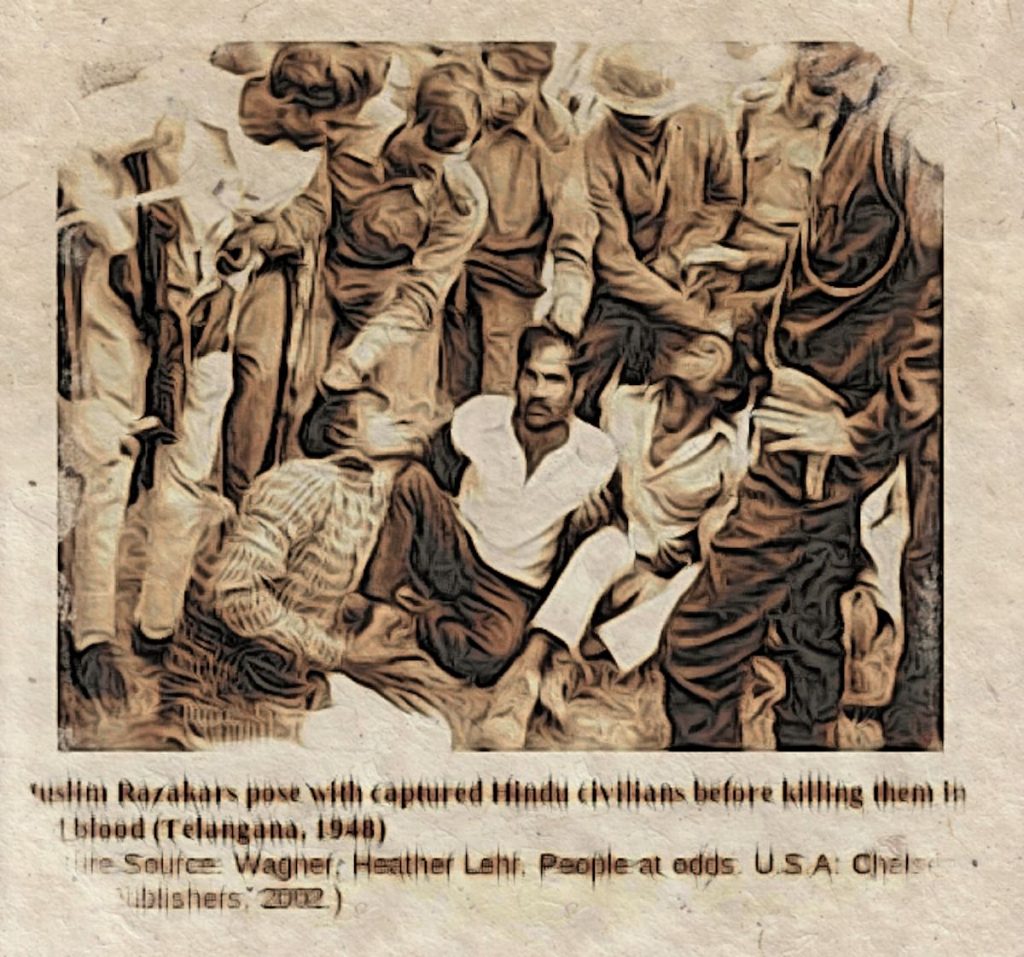 Telangana Armed struggle was a Communist led rebellion of peasants against princely state of Hyderabad in the region of Telangana.  Basically the struggle was to liberate the peasants from unjustified exploitation and merge Hyderabad in the Indian Union when it attains freedom.  The book of Com Rajbahadur Gaur, published by the Communist Party of India (CPI) in September 1947, soon after India got independence, had been titled correctly as it said Tricolour Shall Fly Over Hyderabad. Dr Rajbahadur Gaur was a renowned communist leader of the peasant rebellion that had started in 1944-46 and was  involved in insurrection in 1946-51.

In Hyderabad, with a feudal monarchy, most of the land concentrated in the hands of landed aristocrats known as doras, exploitation was extremely severe. It was a system of agrarian slavery, with doras wielding complete power over the peasants. Conditions worsened during 1930s and a transition was there towards commercial crops.  In the forties, the peasants started turning towards communism, organised themselves through Andhra Mahasabha and began a rights movements.

Catalyzed by a food scarcity that affected the region, following the end of the second world war the movement escalated into a rebellion after the administration and the doras attempted to suppress it. The revolt began on July 4, 1946, when a local peasant leader was killed in the village of Kadavadi in Warangal by the agents of a dora. Beginning in the district of Nalgonda and Warangal, the rebellion evolved into a revolution across Telangana in response to continued repression by the Nizam Mir Osman Ali Khan and later Kasim Razvi.

The Hyderabad state forces and the police, combined with the paramilitary Razakars, were unable to suppress it and were routed, while the rebel forces went on a successful guerrilla offensive. Rebels established a parallel system of government composed of gram rajyams and village communes, which caused a social revolution where caste and gender distinctions reduced. Women participation increased, including in their armed squads. Conditions of the peasants also improved with land distribution.  At its peak in 1948, the rebellion covered nearly all of Telangana with at least 4,000 villages directly administered under their control.

Communists had been active in the Telugu speaking Godavari-Krishna delta region of the neighbouring regions since 1934 and largely organised through peasants’ organisations such as the Andhra Mahasabha (Madras), and the All India Kisan Sabha. The first incursion of the communist movement in Telangana occurred in the Madhira-Khammam area of Warangal district, through peasants who had settled down at the Wyra and Paleru irrigation projects, and had relatives in Coastal Andhra.

The first communist organisations were established in Warangal and Nalgonda districts through the efforts of Chandra Rajeswar Rao, renowned communist leader working in Mungala. The Regional Committee of the Communist Party of India in Telangana was established under the leadership of Pervaelli Venkataramanaiah in 1941.

The students’ movement contributed significantly to the growth of the communist movement. Having gained experience through the Vandemataram protests, a number of radical progressive students organizations were established which eventually merged to form the All Hyderabad Students Union in January 1942. Devulapalli Venkateswara Rao, a former student agitator during the Vandemataram protests, was instrumental in building up the Communist Party in the districts of Warangal and Nalgonda. The nationalist, progressive and secular intelligentsia in the city of Hyderabad turned towards political radicalism as well, influenced by Naya Adab publicizing communist literature, and through the Comrades’ Association initially formed in reaction to the growth of communal sectarian organisations. The association became communist under the leadership of Raj Bahadur Gaur and Makhdoom Mohiuddin.

In February 1947, the British administration announced the transfer of power to the Indian leadership and gave the princely states the option of either joining India or Pakistan or becoming independent. The Nizam of Hyderabad, the Muslim aristocrats and the Majlis-e-Ittehadul Musalmeen wanted Hyderabad to become an independent state but the vast majority of people wanted the state to merge with India in the hope of political freedom and participation in self-government.

The Communist Party added merger with India into its list of demands and aligned itself with the progressive left section of Indian National Congress which had started pressing Nizam to accede. In March 1947, when the division in the Congress became too sharp, the working committee of the State Congress was restored and Swami Ramananda Tirtha was re-elected with a wide margin of 751 to 498 votes against B.G. Rao, enabling him to completely exclude the moderates within the Congress. He praised the communists for their revolt and suggested the incorporation of a more revolutionary policy for the State Congress.

The Congress went on satyagraha seeking the merger of Hyderabad with India and the State Congress under Swami Ramananda Tirtha launched a civil disobedience campaign. The communists joined up with Congress workers in their agitation although they held reservations over the effectiveness of their methods. Soon most of the agitations in Telangana especially in the rural areas was carried out by communists, the police were unable to differentiate between the two and assumed that they had entered into a league. The general understanding among the communists was that the “rightist congressmen” were backed by the doras and opposed to any form of alliance with them while the “leftist Congressmen” wanted unification with the Communist Party but were unable to carry it forward.

The Andhra Conference, previously seen as a dora organisation, grew in popularity among the peasants and started being referred to as the Andhra Mahasabha (AMS) in Telangana. Venkateshwara Rao directly recruited disillusioned Congress members and sympathisers into the Communist Party during the same period. Initially faced with opposition from the moderate leadership, landlord organisations such as the Agriculturalists Association and through heavy political repression from the government, the AMS was slowly transformed into a militant mass organization opposed to the Nizamate with a coalition of peasants, the working class, the middle class and youths as its members. The process was completed in the 1944 Bhongir session of the AMS when two young communists, Ravi Narayan Reddy and Baddam Yella Reddy were elected as the president and secretary. (IPA Service)