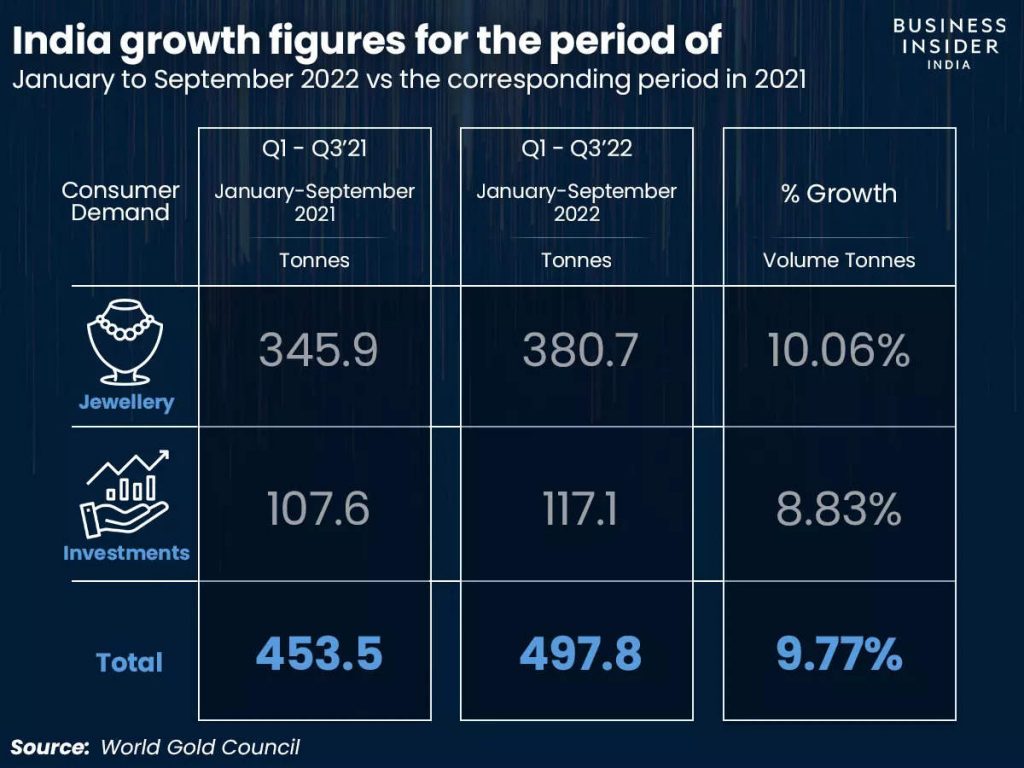 India is leading a global recovery in gold jewellery. This is despite the fact that gold prices have hit a five-month high. The demand engine is driven by urban consumers, encouraged by a return to pre-covid levels of economic activity. Rural consumers were more cautious as their inflation outpaced that of their urban counterparts.

According to World Gold Council estimates, world jewellery consumption continued to rebound in the third quarter of this year and is now back to pre-pandemic levels, reaching 523 tonnes, which is 10 percent higher compared to the same period in 2021. Much of this growth was spearheaded by India’s urban consumers who drove up demand 17 percent year on year to 146 tonnes.

Similarly impressive growth was also seen in much of the Middle East, with Saudi Arabian jewellery consumption up 20 percent since the third quarter of 2021, and United Arab Emirates up 30 percent for the same period. Chinese jewellery demand also saw a modest 5 percent increase, driven by improved consumer confidence and a dip in the local gold price, prompting the release of some pent-up demand.

China, which is the biggest consumer of gold in the world, is expected to see a further pick-up in jewellery demand, boosting the overall numbers further, although a spike in infection more recently in that country has marred the outlook.

Retail investors bought gold as a store of value amid surging global inflation, while ETF investors reduced their holdings in the face of rising global interest rates. Gold’s safe-haven appeal has also been boosted by a depreciating rupee and falling local equity prices.

Even as the country led the global gold jewellery recovery, the Reserve Bank of India added 17.46 tonnes of gold reserves in the third quarter. With the latest purchases, India’s total gold reserves have gone up to 785.35 tonnes, comprising 7.8 percent of the total reserves.

Gold imports by the trade recorded a decline after the Centre hiked the tariff on gold from 7.5 percent to 12.5 percent in July this year. But this has led to a significant increase in the smuggling of gold into the country. Smugglers are using innovative methods to dodge customs authorities to bring in their illegal gold, such as conversion of the metal into paste, powder forms, which are more difficult to detect.

The World Gold Council had, in fact, forecast that the increase in tariff could increase gold smuggling by a third to touch 160 tonnes in calendar year 2022 as compared to the pre-covid period when the duty was 5 percent lower.

The trade is now seeking a reduction in the taxes and duties on gold to encourage more imports through official channels. The All India Gem and Jewellery Domestic Council is urging the government to reverse the tariff increase as well as a reduction in the GST tax to 1.25 per cent from the current 3 per cent.

The trade points out that the higher import duty is creating problems for the domestic industry as it encourages smuggling. According to the industry, a reduction of duty to 4-6 percent would act as a disincentive for illegal trade. This will not only lead to less smuggling, but also add to government’s tax revenue from the legitimate channels, they argue.

According to gold smuggling and seizure data provided by Directorate of Revenue Intelligence, as much as 73 per cent of the gold caught had been brought through Myanmar and Bangladesh. The smuggled gold is apparently brought into Myanmar from China through the border towns on the Chinese and Myanmarese borders. Smuggling using airline passengers as carriers is also rampant on the Gulf-Kerala sector, where seizures happen as a matter of routine, but much larger quantities escape scrutiny.

A proposal to this effect is reportedly under the consideration of the commerce ministry, which has apparently approached the finance ministry on the possibility. There is widespread expectation that some such decision would be announced in the next budget. (IPA Service)