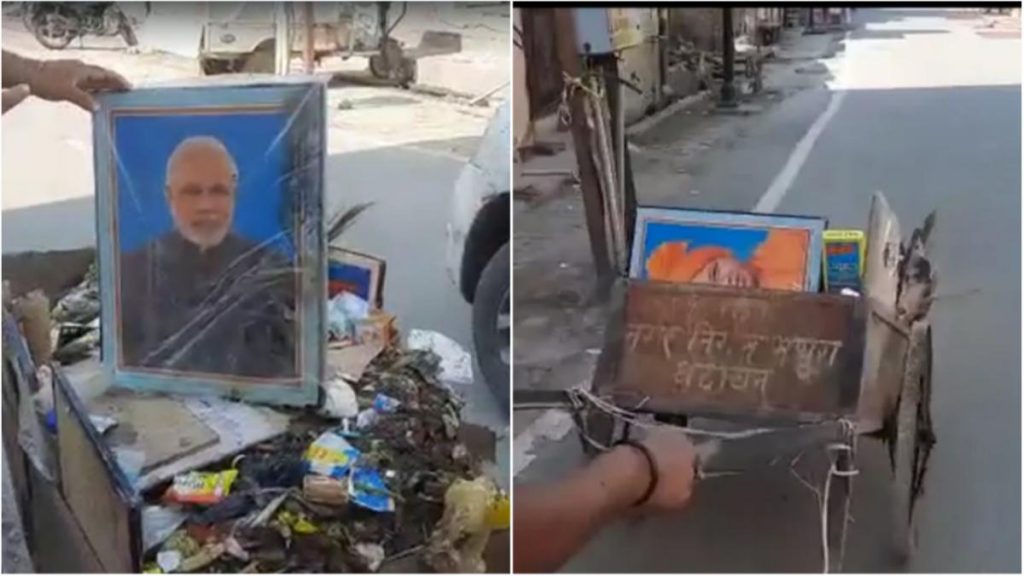 Citizens of Uttar Pradesh should beware. The next time they come across pictures of Modi or Yogi out in the streets leave it where it is, and flee the spot, as hastily as they can; or they’ll be in the tattered shoes of Bobby, 45, who picked up framed photographs of Modi and Yogi from the roadside and is now without a job for the trouble, his family staring at hunger and starvation.

They are calling it what the wages of not recognizing Modi and Yogi could do to your mental and financial health. Bobby has no job now. The job was lost because he picked up two abandoned pictures of Prime Minister Narendra Modi and Chief Minister Yogi Adityanath and put them in a pushcart piled high with the week’s garbage. Somebody driving by spotted Modi-Yogi jutting out of the remains of the week before and made a video which went viral.

Within hours, Yogi’s government struck. Mathura’s mayor and sanitation commissioner sacked sanitation worker Bobby without a preamble. No warning was given, no show-cause notice was issued. The day after, Bobby was fit to be tied, wondering who would put food on the table for his jobless family.

The temporary contractual garbage collector, till the other day, was cursing himself for having set eyes and hands on Modi and Yogi. Politicians have routinely committed worse faux pas, but they were given time to explain, served show-cause notice.

And his “crime!” It is nowhere mentioned that picking up castaway pictures of entitled politicians from the garbage pile and transporting them in a handcart to the designated landfill outside of town limits is a crime fit to cost a person his job. It is not there in the rulebook, and it’s not in the Indian Penal Code. Besides, it wasn’t Bobby who had thrown “Modi” and “Yogi” in the stinking garbage in the first place; it came from somewhere!

Instead, they just  assumed it was him. Especially, the part where he didn’t recognize Modi and Yogi, two of the best recognizable faces in Uttar Pradesh. He didn’t know it’s mandatory for everybody in Uttar Pradesh, from erstwhile ‘raja’ to current day ‘runk’, to be familiar with Yogi’s shaven pate, and Modi’s silvery head.

They did not think once to ask him. Now everybody in Mathura, and almost everybody in Uttar Pradesh, has heard of Bobby, the contractual garbage collector, sacked from the job because he placed Modi and Yogi in the garbage line-up.

People in places as far off as Kolkata and Kerala have read the story of Bobby and Modi and Yogi in the garbage handcart. It made for interesting reading. There is comedy in it, and there is a slice of tragedy in it. Above all, there is a thick slab of entitlement in it, VVIP culture steeped in garbage.

The local media reported it, the national media reported it and, for sure, it will be picked up by the global media. Such a story has been reported from Kim Jong Un’s North Korea, where a mother was jailed for choosing to save her children from a house fire instead of rescuing the photographs of Jong Un’s father and grandfather from the same fire!

For Bobby losing his job is no less than a death sentence. Nobody has faced starvation and survived. It’s like getting consumed by house fire. The gall of the state! It is only where cults prosper that sycophancy such as this pervades. And Modi and Yogi are building up to become cult figures.

It wouldn’t be long before the common man would bow to the ground where Modi and Yogi walked. Sycophancy and cult is different from public adulation, and charisma. The Yogi by his looks and attire stands out among leaders; and Modi is always in the spotlight because of carefully choreographed events at which he is centre-stage.

The point is, Bobby is collateral to making Modi and Yogi cult-figures. If India yesterday voted to elect a President, India also, the day before yesterday, sacked a “lowly” sanitation worker and left his family in desperate straits because he did not give importance to the abandoned pictures of Modi and Yogi, a Prime Minister and a Chief Minister.

Now, if Yogi and Modi have heard of Bobby’s crime and punishment, will the Uttar Pradesh Assembly pass a law which punishes abandoning pictures of Modi and Yogi in the streets of Uttar Pradesh? Last heard, Modi and Yogi in their framed glory were on their way to Alwar in Congress-ruled Rajasthan, after the heartless Bobby got his comeuppance. (IPA Service)

P.S: Good News. Bobby is back at work. All the media outrage worked.

India Need Major Planning In Its Policies To Get Demographic Dividends
Posting....