India Need Major Planning In Its Policies To Get Demographic Dividends 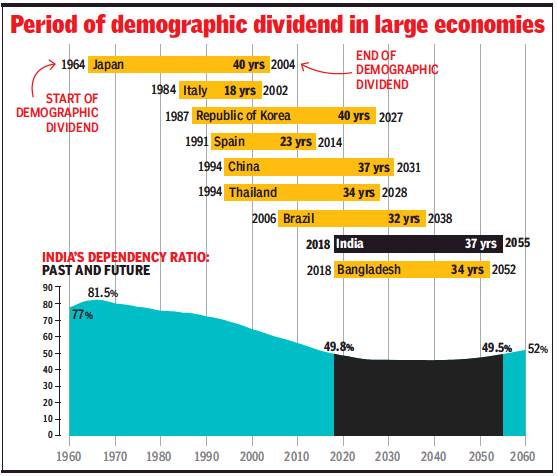 Is the overpopulation a boon or a bane for India, and will we be able to convert its human resources to productive use? Experts say it could be a boon, but only if the people are involved in regulating it.

The topic has come in focus as India will be the world’s most populous country in 2023, surpassing China. According to the latest World Population Prospects report, it may go up to 1.429 billion next year when China’s would be 1.426 billion.

The United Nations Secretary-General Antonio Guterres released the U.N. report on world population day last week and said that by November 15, it would reach an eight billion global population mark. It could grow to 8.5 billion in 2030 and 10.4 billion in 2100,

Those who support the population growth believe it would supply low-cost labour, a valuable resource for India. They say it is positive, resulting in higher income, higher wages, and excellent export potential. India’s population is young and multi-talented so it could be more productive. There will also be multi-talents.

Historically it took many centuries for the global population to reach one billion. As regards India, from 23 crore Indians in 1901, the population growth was slow until 1951. In the next five decades, it shot up three times. The 2001 population census recorded 1.02 billion (102 crores).

Globally there are about 1.2 billion Hindus. India, which has a population of 1.4 billion, has 80 percent Hindus. The BJP leaders are concerned about the declining population of Hindus and an increasing number of Muslims.

Those who oppose argue that an accelerating trend means more people to feed and provide clean water, electricity, and adequate social services like education and healthcare. It also means a significant environmental impact.

Secondly, India’s economy was already showing signs of weakness before the COVID-19 crisis; A new report from the McKinsey Global Institute identifies a reform plan for the next 12 to 18 months. “If India does not create enough jobs and its workers are untrained, its demographic dividend may become a liability. And education and skill development will be the biggest enablers for reaping this dividend,” the report said.

Thirdly, converting the ‘demographic dividend’ is subject to investments in quality education, healthcare, and employment generation, and how best we deal with aging, disease, and disability.

Fourthly, children have lost almost two years of education due to the pandemic. The gap needs to be addressed. There should be more budget allocation for health and education, as seen as lacking during the pandemic crisis.

India’s efforts to curtail population growth began relatively early and were the first to launch a national family planning programme in 1952. And since then, there have been many attempts to contain the growing numbers.

The “family planning” programs became coercive and controversial in 1975 when Mrs. Indira Gandhi declared a state of “Emergency”. In April 1976, the government adopted an “integrated” approach to family planning that incentivized contraception and sterilization. Since then, the subject has been a no-no for politicians, and the family planning department has been renamed family welfare.

In his Independence Day address on August 15, 2019, Prime Minister Narendra Modi brought the issue to the national focus. He extolled the virtues of small families and urged the Centre and states to check the “uncontrolled growth”. According to BJP insiders, discussions are going on to prepare a new population policy before the next General Elections in 2024. Some BJP-ruled states like U.P have already taken measures to regulate the population acceleration. Now is perhaps the time for formulating policies to contain it.

The national commission (NCRPWC), set up by former Prime Minister Atal Behari Vajpayee in 2000, also recommended constituting population-regulation laws. Parliament has also been demanding regulation from time to time. Lawmakers from both the houses and from different parties have, till now, proposed 35 private bills.

The RSS, the parent organization of the ruling BJP, has also advocated a uniform population policy. In his usual address to the RSS workers on last Vijayadasami day, the RS.S. chief Mohan Bhagwat noted, “A population policy keeping in mind the next 50 years should be formulated, and it should be implemented uniformly for everyone.”

The family planning budget is only a meager 4% of the health budget, and India spends only 1.5% on birth spacing methods. We need to invest more in the health and education sectors. Analysts believe population growth can be a double-edged sword, and the country needs to maximize its potential. The government needs to weigh the pros and cons of population growth and choose the right path. Unplanned growth will only result in chaos. (IPA Service)