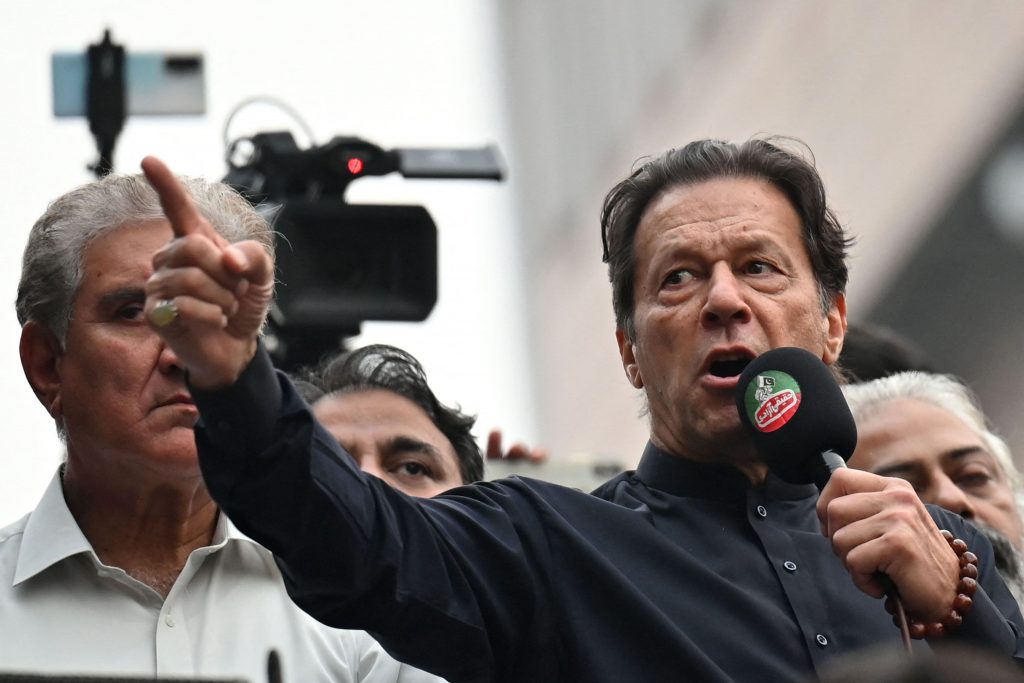 Mystery surrounds the failed  assassination attempt on the erstwhile Prime Minister of Pakistan and chairman of the Pakistan Tehreek-e-Insaaf (PTI) Imran Khan on the seventh day of his protest march  on Thursday afternoon demanding snap elections after being forced from office in April this year. He was shot in his right sheen – not chest- while standing and waving to thousands of cheering supporters at Gujranwala which is 200 kilometres from the national capital, Islamabad, and in the  province of Punjab where a PTI-led government is in power. Fortunately, the assassin seemed to have been amateurish and not a seasoned hired killer.

Nonetheless, the PTI supremo had a feel of being in danger and claims to have made it public. Intra-Pakistan terrorism is many times greater than alleged Islamabad-backed terrorism in Jammu & Kashmir. The insecurity is so real that even some woman journalists carry pistol while on assignment for covering events. Assassination attempt at Khan underscored growing political insecurity in Pakistan, more so when the government and the PTI boss refuse to back down from their positions. “The question that is being asked again and again is if we are a parliamentary system, and if this is to be a civilian government, then let the electoral process continue, let the country go to general elections,” quipped Lahore-based  political analyst Asad Rahim Khan to Al Jazeera, a political analyst based in Lahore

Khan did lose no time to blame the Prime Minister Shehbaz Sharif who was just back from a successful visit to China. Taking cue from him, the PTI secretary general Asad Umar said that the PTI party chairman believed Interior Minister Rana Sanaullah, Prime Minister Shehbaz Sharif and Major General Faisal had orchestrated the attempt at his life  on Thursday.. On Khan’s behalf, he demanded that Sharif vacate office and that the demand was not accepted, nation -wide protests would take place “Pakistan simply cannot continue to function like this,” he said.

President Arif Alvi tweeted condemning the “heinous assassination attempt on the brave Imran Khan” made it clear that politicization of the incident would lead the nation to nowhere.   He termed the attack “shocking, deceitful and cowardly”. He hoped that Khan’’s injuries would be “non-critical”.

Veteran Pakistani journalist Hamid Khan told a TV channel that the PTI chief’s accusation, singling out the Pakistan premier and others remained a blame without substantive evidence. Imran Khan is evidently trying to make political capital in order to go ahead with his plan to be back to power. Until Thursday, King Khan was in back foot after audio leaks showing Khan, allegedly heard talking about horse-trading and branding his opponents as “traitors” and  the Election Commission of Pakistan’s threat to  annul his  membership of National Assembly for five years.

While 14 people, all belonging to the opposition PTI were injured and one of whom succumbed to firing, the former-Pakistan Test cricket captain is out of danger while other leaders like Faisal Javed were injured. The shooting was condemned inside and outside Pakistan. The cricketers’ community aside, the Prime Minister of Canada, Justice Trudeau, was among those who promptly condemned the incident “heinous” , asserting that violence should have  no place in politics. Miltablishment has expressed concern and called for prayers for Khan. “Firing incident during Long March near Gujranwala is highly condemnable,” stated a press communiqué of the Inter-Services Public Relations.

Interestingly, the  Punjab Chief Minister Pervez Elahi  a senior PTI leader promptly suspending the entire staff including the station house officer  of the relevant police station for leakage of the video clip , containing the statement of the suspected attacker who allegedly shot the former PM  former prime minister Imran Khan. The failed assassin confessed that he shot the PTI chief as he was “misleading” the nation and that he wasn’t assigned by anyone for the act. The Punjab CM also ordered seizure of mobile phones of entire staff under the SHO.

The PM  tweeted” I condemn the incident of firing on PTI Chairman Imran Khan in the strongest words I have directed Interior Minister for an immediate report on the incident. I pray for the recovery and health of PTI chairman & other injured people. The federal government assured all help to the Punjab government to strengthen security measures for political leaders irrespective of party affiliation.

The PTI, led by its superman King Khan, in a video message just prior to the long march raised a slogan of ‘freedom struggle. Pakistan is amidst slavery. It is better to die in protest rather than live like slaves, he said. The rhetoric is in Khan’s tweet. “The sea of people along our March on the GT Road. For 6 months I have been witnessing a revolution taking over the country. Only question is will it be a soft one through the ballot box or a destructive one through bloodshed?

Right at this time, the scenario tilts against the ruling coalition in Islalamabad. It is advantage-Imran. People on the street in the national capital are seething with considerable anger in the aftermath of shooting at Gujranwala. Reports of protesters blocking roads, burning tyres, and this could escalate into something big are pouring in.  (IPA Service)

Congress May Lean On Priyanka For Intra-Party Pro-Rahul Outreach
Posting....