High Inflation, Rate Hikes Add To Gold’s Appeal Both As Hedge And Asset 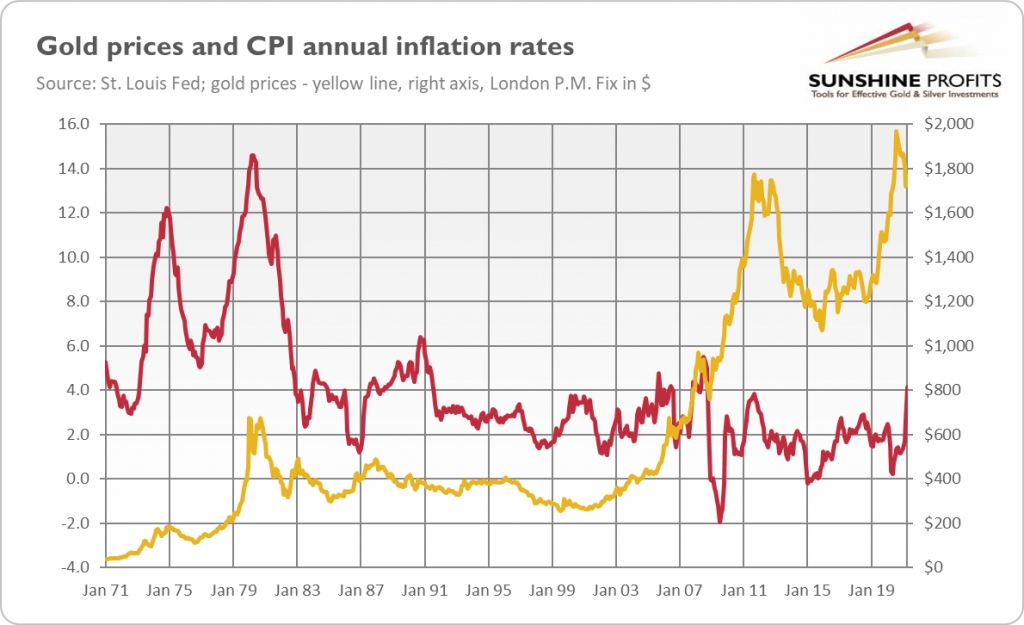 Like all other investment instruments, weaker investor interest has affected gold prices as well.  There has been bi-directional equity volatility in recent times, but this has failed to support gold prices as short term momentum waned.

Gold fell 3.8 percent  in May this   year  leaving it just under 2 percent higher on the year at $1,839 per ounzeoz.1 Gold’s pullback was largely driven by weaker momentum via ETF outflows, coupled with lower risk and uncertainty as implied 10-year expected inflation break-even rates fell and equities rallied into month-end.

According to World Gold Council, outflows of global gold ETFs totalled 53 tonnes, worth $3.1 billion in May, losing 1.3 percent of assets.

Equity market volatility hit the highest levels since the start of COVID, with most equity markets in a pullback or bear market territory. Bond yields and the US dollar fell during the month – both of which are generally positive for gold. But that has not been the case in reality, which was marked by negative momentum in gold last month.

According to World Gold Council research, the relevance of gold as a long-term strategic asset has not seen much damage, investors have often been found to take advantage of tactical opportunities or shifting macroeconomic conditions to review their gold allocations. Seasonally, January has been   a strong performing month for gold over multiple time periods, particularly since 2000. This is attributed mainly to portfolio inflows and rebalancing, combined with the effect of Chinese New Year.

Until 2000, September was the strongest performing month of the year, linked to investors preparing for year-end as well as positioning ahead India’s buying season. However, since 2000 this seasonal effect has shifted forward. Aside from January, August has now become the only other month with a positive return for the past 20 years.

According to WGC, although current market conditions are unlike anything we’ve seen historically, continued equity weakness could very well spark a rally in the gold price.

The equities markets have pulled back significantly this year, with most major indices more than 10 percent lower year to date. Equity volatility remains at multi-year highs, but gold volatility is subdued. The council points out that while some may worry that gold might struggle if equity markets rally, gold’s recent performance is also a by-product of liquidity sourcing for beaten-up areas of the market. In fact, in the few instances of stock market rallies over recent weeks, gold has also rallied most of the time. Historically, gold maintains positive performance in most longer-term stock rallies.

But gold has been found to do well even during sustained stock market pull-backs. The performance of gold during the 10 worst quarterly returns by S&P 500 shows that gold had positive returns in nine out of the ten cases, averaging 5.4 percent while S&P 500 averaged minus 20.7 percent.

The council sources state the challenges faced by Indian investors last year amidst economic slowdown during the pandemic may well continue this year, with the consumer price index causing a serious scare, depreciation of the rupee and the sharp rate hikes by the Reserve Bank. The council believes that the environment of greater uncertainty and increased market volatility will help investors benefit from gold’s attributes to improve the performance of their portfolios.

According to WGC, the greater a downturn in stocks and other risk assets the more negative gold’s correlation to these assets becomes. Gold’s correlation not only works for investors in times of turmoil. due to its dual nature as both jewellery and investment, gold’s long-term price trend is supported by income growth. When stocks rally their correlation to gold can increase, driven by the wealth effect and, sometimes, by higher inflation expectations. Looking at the last 15 years, gold in rupees has delivered an annualised rate of return of 11.7 percent, marginally higher than equities at 11.6 percent and higher than returns on other asset classes such as bonds. (IPA Service)