Hamas May Use Malaysia As New Operational Base 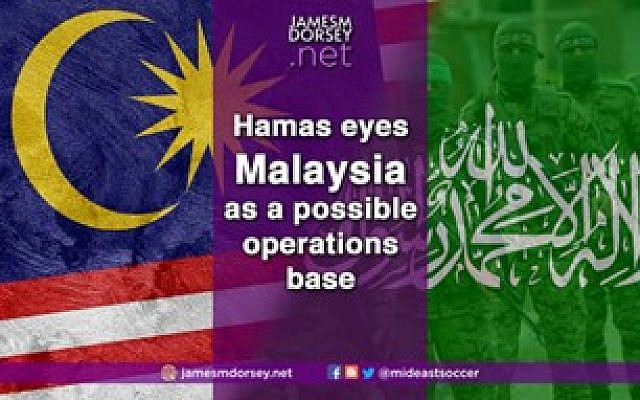 Malaysia has emerged as a potential external operations base for Hamas, the Islamist group that controls the Gaza Strip if Turkey expels or restricts the group’s movements as a part of its rapprochement with Israel.

Turkey has in recent months deported Hamas activists or refused them entry into the country as it sought to improve its troubled relations with Israel, according to Israeli press reports.

Turkish-Israeli relations have been strained since Israeli forces stormed a flotilla in 2010 headed towards Gaza in a bid to break an Israeli-Egyptian blockade. Nine activists were killed, and ten Israeli soldiers wounded in the incident. The flotilla sailed from Turkey and was chartered by a Turkish NGO.

Israeli President Isaac Herzog visited Ankara in March, becoming the first Israeli president to do so in 15 years. At a summit with Turkish President Recep Tayyip Erdogan, both leaders pledged to open a new chapter in the relationship.

The press reports suggested that the deported Hamas operatives had been on an Israeli list presented to Turkey of individuals involved in the group’s armed activities in violation of their terms of residence in Turkey. Saleh al-Arouri, Hamas’ deputy political bureau head, and former military commander, reportedly was among those expelled.

Sources close to Hamas warned that a withdrawal of support for the group would undermine Turkish efforts to position itself as a champion of Muslim causes, first and foremost Palestine, at a time that it is competing for geopolitical leverage and religious soft power in the Muslim world.

Israel has long demanded that Turkey, which has  granted Turkish citizenship to some Hamas leaders, crackdown on the group as part of any improvement in relations.

Earlier this week, Al Mekalemeen, a Muslim Brotherhood-affiliated television station, said it was shutting down its operations in Turkey “due to circumstances that everyone knows about.” Al Mekalemeen did not specify the circumstances.

Turkey had earlier begun to curtail Egyptian opposition media that had either flocked to Istanbul or been newly established in the city as it emerged as a Mecca for primarily Islamist Middle Eastern opposition and dissidents. Hamas is widely seen as an offshoot of the Muslim Brotherhood.

The anti-Islamist moves are part of broader Turkish efforts to improve relations with its Middle Eastern detractors, not only Israel but also Saudi Arabia, the United Arab Emirates, and Egypt, where general-turned-president Abdel Fatah Al-Sisi toppled in 2013 a democratically elected Brotherhood government with Saudi and Emirati support.

Israel and Egypt have blockaded Gaza since 2005, when Israeli troops withdrew from the Strip conquered during the 1967 Middle East war. Hamas seized control of the region in 2007 in armed clashes with its rival Al Fatah after narrowly winning elections in 2006. Palestinian President Mahmood Abbas leads Al Fatah.

In a twist of irony, Hamas retains a degree of support from Qatar with Israel’s tacit agreement. Ismail Haniyeh, one of Hamas’s most senior leaders, is believed to remain a resident in the Gulf state, where he publicly meets with visiting dignitaries like Iranian foreign minister Hossein Amir-Abdollahian, and Palestinians from the West Bank. The Hamas official has also met twice in the last three years with Qatari emir Tamim bin Hamad Al Thani.

Nonetheless, Qatar is unlikely to allow the group to re-establish itself after the Gulf state forced it to move to Turkey as part of a 2014 deal that led to a return of the Saudi, Emirati, and Bahraini ambassadors to Doha. The ambassadors had been withdrawn in protest against Qatar’s alleged support of Islamists.

As a result, Malaysia has emerged as a potential base because the group has nowhere to go in the Middle East if Turkey expels it or severely curtails its activities and presence in the country.

If forced to find another base, Hamas’ choices are reminiscent of those Palestine Liberation Organisation leader Yasser Arafat faced in 1982 when Israeli troops forced Palestinian fighters to leave Beirut. At the time, Tunisia, the PLO’s new home, seemed a long way from Palestine but was at least an Arab country. Malaysia would seem not only geographically but also culturally more distant from Palestine than Tunisia.

Even so, Hamas enjoys public support in Malaysia. Some analysts said the cultural organization, or PCOM, was widely seen as Hamas’ ‘embassy’ in competition with the Al Fatah-controlled official Palestinian embassy in Kuala Lumpur. The PCOM was founded after Al Fatah refused to vacate the embassy following the 2006 election.

Malaysian foreign minister Sri Saifuddin Abdullah made a point last month of tweeting about a phone call with Haniyeh, the Qatar-based Hamas leader. A well-placed Malaysian source said that the country’s security forces may object to granting Hamas greater leeway in Malaysia. Security forces in some other Southeast Asian nations would likely support their Malaysian counterparts.

The security concerns would likely centre on fears that an enhanced Hamas presence could turn Malaysia into a Middle Eastern battlefield. Israel is seen as responsible for the killing in 2018 in Kuala Lumpur of a Palestinian university lecturer and activist believed to be a Hamas operative.

Hamas has used its cultural centre in Kuala Lumpur to maintain unofficial contacts with various Southeast Asian nations that do not want to be seen to be talking to the group either because of their relations with Israel, their opposition to political Islam, and/or their standing in Europe and the United States. The US has designated Hamas as a terrorist organisation.

Neither Indonesia nor Malaysia, Southeast Asia’s major Muslim-majority countries, have diplomatic ties with Israel. However, Malaysia is more strident in its opposition to the Jewish state, support of the Palestinians, and at times anti-Semitic statements, particularly by its former prime minister, Mahathir Mohamad.

To be sure, it is still early days in the rapprochement between Turkey and Israel at a time when broader efforts to reduce regional tensions remain fragile. Moreover, with US-Iranian negotiations to revive the 2015 international agreement that curbed the Islamic republic’s nuclear program seemingly at a breaking point, tensions could easily still spin out of control. (IPA Service)