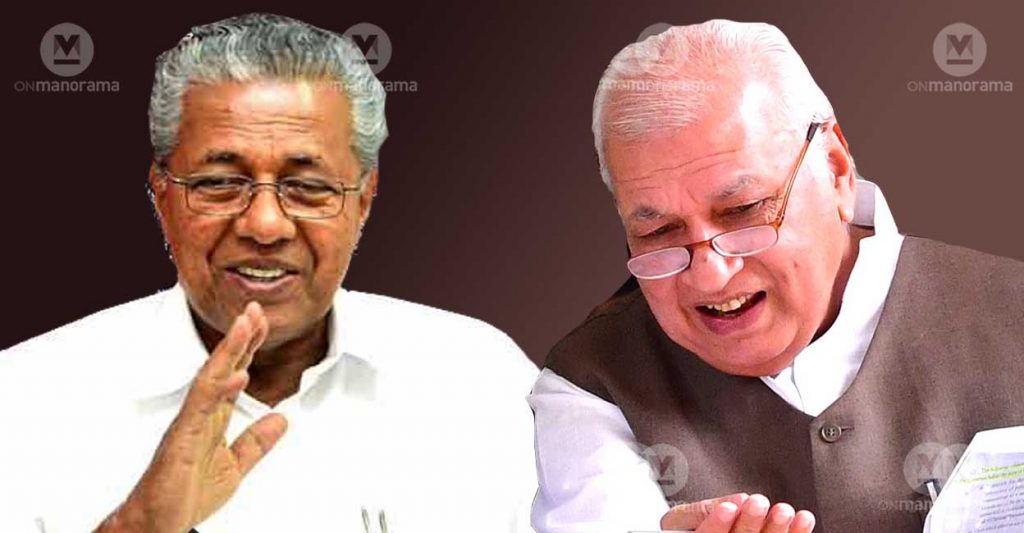 THIRUVANANTHAPURAM: The confrontation between Kerala Governor Arif Mohammed Khan and the CPI(M)-led Left Democratic Front(LDF) Government plumbed a new depth with the Government deciding to bring in an ordinance stripping the Governor off the Chancellorship of Universities and the Governor firm on referring the ordinance to the President of India.

According to a note released by the Chief Minister’s office, the Government will recommend that the Governor promulgate an ordinance to appoint “renowned academic experts” to the Chancellor’s post in various universities. Simultaneously, the Acts governing 14 state universities will be amended to remove the provision stipulating that the Governor be the Chancellor. In this connection, the Cabinet referred to the MM Punchhi Commission report which recommended that governors should be freed from the Chancellor’s role.

States like West Bengal, and Tamil Nadu have already passed legislations to divest the Governor of the Chancellor’s powers. The Cabinet justified the ordinance saying that experts in the sector should be at the helm in universities to attain the State’s goal of raising the standards of higher educational institutions to international standards. The Cabinet’s decision has close on the heels of the statement made by CPI(M) state secretary M V Govindan that the party would go to any extent to protect the autonomy of universities from the Governor’s interventions and trespasses. It may be mentioned that the LDF Government has taken a leaf out of the DMK-led Tamil Nadu Government’s book. Tamil Nadu had passed two bills to transfer the power of appointing VCs from Governor to the Government. The bill, of course, is yet to get the Governor’s assent.

The passage of the ordinance will not be smooth. That much is clear from the Governor’s declared intention to refer it to the President. The difficult is that the state will not be able to bring in a bill on the matter until the President takes a decision on the decree. The other option for the Government is not to send the ordinance to the Governor and straightaway get the assembly to pass it. The move will run into stiff opposition from the opposition parties too. Both the Congress and the BJP have signalled their intent to oppose the move to divest the Governor of the Chancellor’s role. The BJP has even threatened to hit the streets if the government went ahead with the decision.

Earlier, Governor Arif Mohammed Khan suffered a setback with the Kerala High Court restraining him from taking a final call until the court takes a decision in the writ petitions filed by the Vice-Chancellors challenging the show-cause notices issued by the Chancellor. In the notice, Khan had asked the VCs to explain what legal right they have to hold the office. Justice Devan Ramachandran issued the order on the petitions filed by Kannur VC Gopinath Ravindran and other VCs seeking to quash the show-cause notice. The Kannur VC’s counsel submitted that he had challenged the very authority of the Chancellor to issue a show-cause notice.

The Governor, in the meantime, scored a self-goal when he barred two TV channels from attending his press conferences. While interacting with the media in Ernakulam, an angry Khan asked the representatives of MediaOne TV, run by the Madhyamam Broadcasting, and the CPI(M)-backed Kairali TV to leave. Khan asked them “to get out” the reporters of the two channels. The duo had attended the press conference after getting san invite from Raj Bhawan! Khan is unhappy with MediaOne as the channel has targeted him for his stand on the Shah Bano case. His grouse against Kairali TV is that the channel had aired wrong news about him and refused to rectify it requests from the Raj Bhawan notwithstanding. Both the Democratic Youth Federation of India (DYFI) and the Kerala Union of Working Journalists(KUWJ) took out protest marches to the Raj Bhawan.

In another development, the High Court refused to stay the appointment of Ciza Thomas as Vice-Chancellor in-charge of APJ Abdul Kalam Technological University (KTU). The Chancellor’s counsel argued that in the wake of the judgment of the apex court cancelling the appointment of MS Rajashree as VC of the KTU, even for making temporary arrangements, only an academician having 10 years experience can be considered as per the UGC regulations. Ciza Thomas was a professor at Trivandrum Engineering College for more than 10 years. That is why the Chancellor has preferred her. (IPA Service)

Climate Crisis In The World Including India Is Accentuating Faster
Posting....