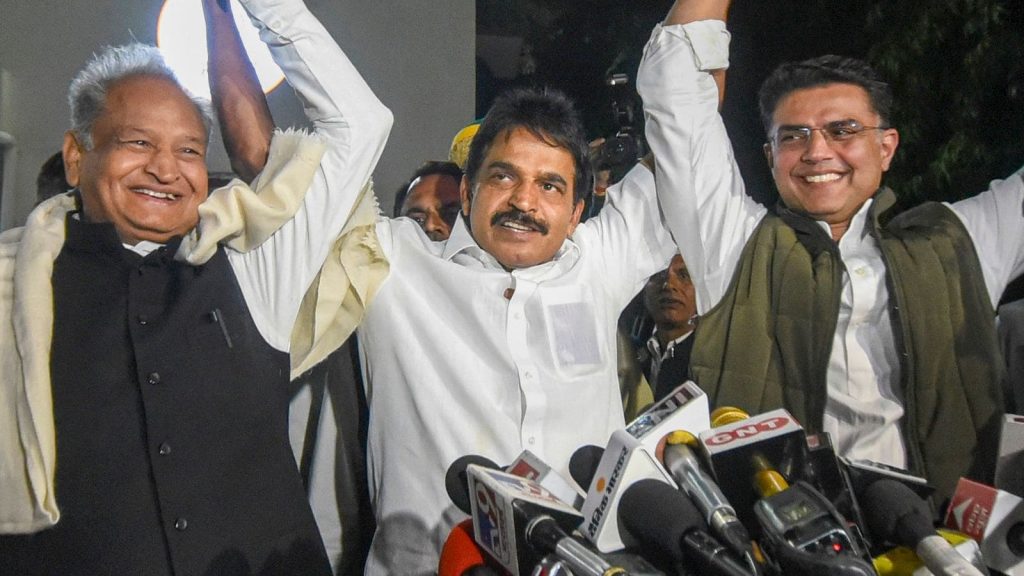 In a show of unity, Rajasthan Congress leaders Sachin Pilot and Ashok Gehlot were seen together on Tuesday for the first time since the Rajasthan Chief Minister’s “gaddar” remark which had reignited a war of words between the two leaders a few days back. They were seen together along with over 30 Congress leaders at a meeting for the part’s Bharat Jodo Yatra, scheduled to enter Congress-run Rajasthan on December 4.

In a video from the meeting, Gehlot and Pilot were seen greeting each other. Congress leaders spoke to reporters after participating in the meeting and party general secretary KC Venugopal told the media, holding both leaders’ hands, “We are united. Here Ashok Ji and Sachin Pilot Ji have said that the Congress party in Rajasthan is united.” Venugopal reiterated former party president Rahul Gandhi’s remarks in Indore on Monday when he had said both Gehlot and Pilot are “assets” to the Congress.

As both the leaders seemed united at this show of strength, Pilot said, “Bharat Jodo Yatra with Rahul Gandhi will be welcomed with maximum enthusiasm and energy in Rajasthan.” Congress party’s Bharat Jodo Yatra will go on for 12 days in Rajasthan, and will see participation from all sections of society, he added.

Senior party leader Jairam Ramesh tweeted, “The Congress in the state is united and determined to ensure that it will be an outstanding success. And indeed it will be!” Earlier, while going into the meeting, Gehlot too had recalled Gandhi’s remarks.

Venugopal said the yatra will not be a short-term event, and the party will unitedly fight the next elections and win. The yatra will enter Rajasthan in Jhalawar and will cut across the state in about 15 days.

Gehlot’s scathing remark against Pilot came after a Gurjar leader Vijay Singh Bainsla threatened to oppose Rahul Gandhi’s ‘Bharat Jodo Yatra’ in Rajasthan unless Pilot is made the chief minister.

As assembly polls are due next year in Rajasthan, the AICC had to step in to do some damage control and said Gehlot’s differences with Pilot would be “resolved” in a manner that strengthens the party.

Gehlot and Pilot have been at loggerheads over chief ministership ever since the Congress won the Rajasthan polls in 2018.