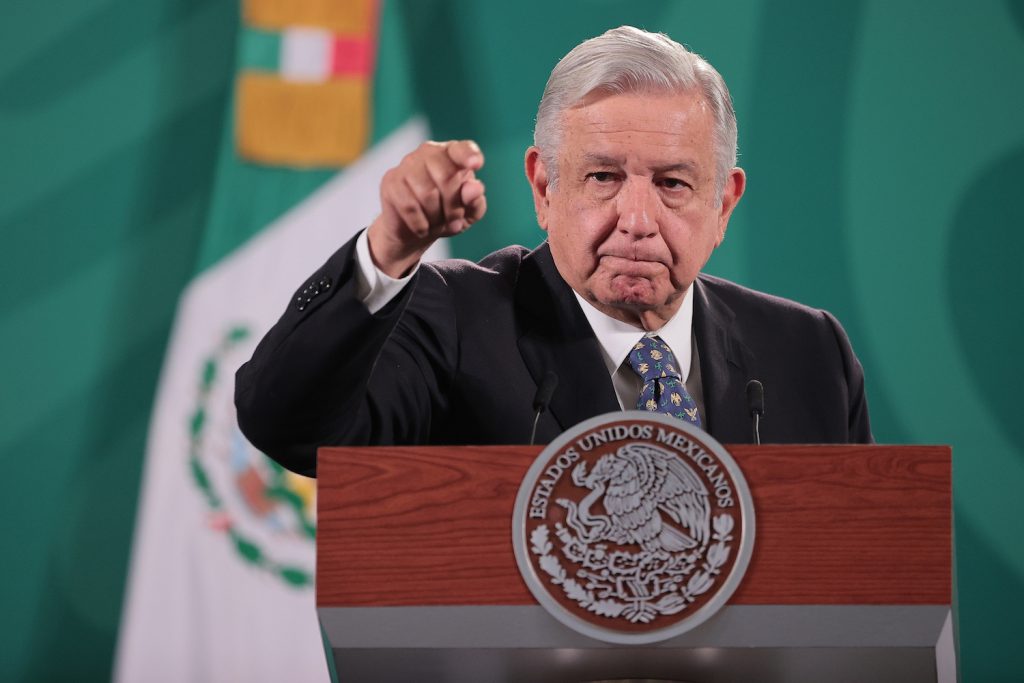 “Sometimes there are revolutions but people keep on thinking the same way. But now we are seeing a peacetime transformation process and there is a change of mentality… I said yesterday that we are winning the battle against racism, classism, discrimination. This is not about material things, not about welfare programs. There’s been a change of mentality.”

Mexican President Andrés Manuel López Obrador (AMLO) was commenting on events of November  27, the fourth anniversary of his taking office. AMLO and his Morena Party administration had staged a march and then a rally in the Zócalo plaza in Mexico City. They sought to demonstrate the Mexican people’s support for what AMLO calls Mexico’s Fourth Transformation.

Supporters gathered at the Angel of Independence Monument and walked three miles along Reforma Avenue to arrive at the Zócalo. The crowd was such that the walk, with AMLO walking too, lasted five hours. And, “Not even a window was broken,” according to Claudia Sheinbaum, who heads Mexico City’s government.

AMLO spoke before 1.2 million people. He highlighted what he regarded as outstanding achievements of his government and promised that work would be continuing “under the premise of attending first to the poorest and most vulnerable people.” He attached the name “Mexican humanism” to his government’s “socio-political model.” Noting the high representation of youth in the crowd, AMLO proclaimed a “generational change.”

In his remarks, AMLO catalogued achievements in providing for people’s needs. A report from La Jornada news service is the basis for the following summary. Security is improving, he indicated. His government “on a daily basis has to confront the scourge of violence; corruption and impunity are not tolerated. Crimes that fall within federal jurisdiction are down 27.3%.”

AMLO listed social advances in various areas 35 million families, 85% of the total, directly receive “at least a little portion of the national budget,” and the others benefit from reduced taxes and reduced costs for essentials. The minimum salary has more than doubled, “something never seen in the last 40 years”—and will be increasing more in the coming year.

Labour reforms include secret voting in union elections, elimination of subcontracting, and a doubling of profit-sharing arrangements. Almost 28 million new workers are enrolled in social security, and the salaries of workers have reached “historically” high levels. There are 1.3 million new government jobs. Now 283,535 single mothers working outside of the home receive 800 pesos each month; 3.7 million families with children in elementary schools receive 1680 pesos every two months; and 4.2 million upper-level students receive the same amount. Some 410,000 university students from poor families receive 2450 pesos monthly, while 128,950 postgraduate students and researchers receive scholarships.

AMLO emphasized the construction by his government of 145 free public universities where 1168 professors are teaching and 45,581 young people studying. The aim is to establish 200 such institutions within the so-called “Benito Juárez System” which, according to a government website, is “dedicated to young people excluded by economic reasons” and those whose geographic access to higher education is limited.

The president mentioned that funds are available that enable parents of school children to maintain and rehabilitate 113,971 school buildings. Teachers’ salaries are up 21%, and schools now provide a “labor base” for 650,000 education workers. He noted that his government’s “relation with teachers is one of respect and gratitude… There have been no strikes or work stoppages in the public schools.”

AMLO emphasized that IMSS-Bienestar, the federal healthcare system, has extended into new regions where medical generalists and specialists are for the most part working “two shifts” every day. He is “committed to extending the IMSS-Bienestar system throughout the country to make people’s right to healthcare a reality.”

According to its website, “The IMSS-BIENESTAR Program provides first and second level health care services in its health units. The latter covers the specialties of gynaecology-obstetrics, general surgery, internal medicine and paediatrics.” With “43 years of experience,” the program “combines medical care with health promotion actions in the community.” Care is provided gratis to patients without social security benefits.

AMLO’s reference to a “Fourth Transformation” raises the question about the first three transformations. These were three periods of significant change, specifically: independence from Spain in 1810-21; reforms, mainly separation of church and state, undertaken by President Benito Juárez in 1858-1861; and Mexico’s Revolution in 1910-17 that accounts for the present Constitution.

The march and mass gathering of Morena and AMLO supporters annoyed individuals such as Sandra Cuevas, the mayor of Cuauhtémoc. She denounced a “march of hate, division, inequality and corruption” while claiming that government officials at all levels and beneficiaries of social programs had been forced to participate.

One observer writes that for Morena to be “winning the streets” doesn’t detract from the advantage conservative political parties enjoy with an overwhelming presence on social media and on newspaper front pages. Their power there, and in their organizations and the judiciary, enables them to “hinder, obstruct, and sabotage” Morena’s work of governing. In any case, opinion polls are pointing to a large Morena Party victory in the elections of 2024. (IPA Service)