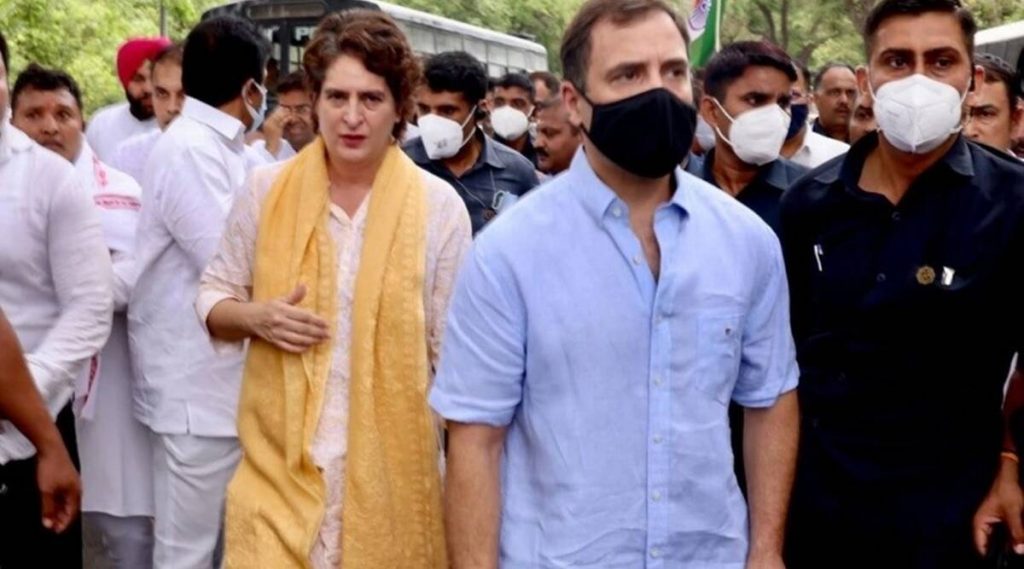 The ordeals Rahul Gandhi has been facing in the National Herald money laundering case are yet to dissipate. The probe pertains to alleged financial irregularities in the Congress-promoted Young Indian Private Limited, which owns the National Herald newspaper. The ED probe is more of the nature and intent of insulting Rahul for his audacity to question and put Narendra Modi in tight spot.

Though he has been interrogated for nearly 52 hours spread over five days, speculations are making round of the power corridor that after questioning Sonia Gandhi in the same case, the ED may again summon Rahul for further interrogation. Apprehensions are also being expressed that he may be arrested after the next round of questioning.

If the sources are to be  believed , while some leaders of BJP’s ally and even some senior BJP leaders have been opposed to this machination of the ED, both Narendra Modi and Amit Shah are not in the mood to concede. Memories of the CBI interrogating them in the Gujarat pogrom haunts them. They nurse the feeling that the CBI had hounded them at the prompting of Sonia Gandhi.

Both the leaders are terribly cut up with Rahul Gandhi for harassing and insulting them by frequently questioning their actions and policies at a time when no one, even the opposition leaders, dare to raise his voice against them.  The political scenario has turned scary. Though both the leaders agree that ED action will turn the people soft towards them and help them earn their sympathy, they are unwilling to allow breathing space to Gandhis. Their mission is to teach a right lesson to Gandhis. Though Modi has been harping on “Congress Mukta Bharat”, he knows it well that Congress cannot be finished till Gandhis continue to lead it. By getting both Sonia and Rahul preoccupied with the ED interrogations, the Modi-Shah objective is  to ensure that the two leaders cannot give time to preparations for the coming state assembly    elections.

The ED has been asking Rahul about the incorporation of the Young Indian Private Limited, operations of the National Herald, the loan given by the party to the newspaper’s publisher Associated Journals Limited (AJL), and the transfer of funds within the news media establishment. Stretching this small issue, virtually one issue, for five days simply makes their intent explicit and clear. For ED it is more important to accomplish the task entrusted to it by its political masters.

Mentioning National Herald is simply a façade. In fact Congress has accused the Centre of targeting opposition leaders by misusing investigative agencies and has termed the entire action a political vendetta. During their 52 hours of interrogation, the ED has repeatedly put one simple question to him about the assets owned by AJL. Gandhi was reportedly asked about a loan of Rs 1 crore taken by YI from a Kolkata-based company in February 2011 and the rationale behind it. The ED has its argument. According to the agency the role of Gandhi and his detailed statement in the case is vital as he is a “major shareholder” (38 per cent) in Young Indian (YI) and an “important person” in the affairs of AJL and National Herald.

In February last year, the Delhi High Court issued a notice to the Gandhis for their response on Swamy’s plea, seeking to lead evidence in the matter before the trial court. The Gandhis had secured bails from the court in 2015 after they furnished personal bonds of Rs 50,000 and one surety.

Enemy cannot be ghettoised as good or bad, political or personal. For Narendra Modi enemy is enemy and he or she should not be spared. Positioning on this ecosystem he has identified members of the Gandhi family as his principal enemies. The manner in which two leaders are targeted by the BJP, RSS and investigating agencies clearly manifests that the BJP leadership is determined to finish them politically.

Some senior Congress leaders openly accuse Modi and Shah of targeting Rahul Gandhi with the simple motive to damage his family’s reputation. Had it been not the case the ED would not have resorted to selective leaks about Rahul Gandhi’s questioning. The ED is under legal obligation to conduct the interrogation in absolute confidence. If the ED begins to leak one side of the story, biased story, prejudiced story, distorted story what kind of an investigation is this?

The Congress MPs also met the Lok Sabha speaker Om Birla and Rajya Sabha Chairman M. Venkaiah Naidu to lodge formal complaints against this tactics of the ED. After leading a delegation of Rajya Sabha members to Naidu’s residence, leader of the Opposition in the House Mallikarjun Kharge alleged mental and physical torture of MPs by the police and demanded strict action.

Leader of Opposition in the Rajya Sabha M. Mallikarjun Kharge said the Union Government had ordered ED to go after Mr. Gandhi and his mother, Sonia Gandhi, to ensure that he would not contest elections from two constituencies. He also emphasised that the National Herald was an asset of the Congress party and the party was making all efforts to protect it. Kharge said; “If we fail to protect it, the very purpose of its establishment would not be served. We are fighting to protect and sustain our pro-people ideology. They [BJP leaders] are playing such things to tarnish the images of Sonia and Rahul before the people of this country. People, who are watching it, are capable of understanding the ill-intentions behind it”.

Reacting to the BJP leaders allegation that Congress has hit the street only with the intention to protect Rahul, a senior Congress said more than it the party intends to expose the nefarious game being played by the ED. Rahul is the former president of the party but the manner in which the ED is trying to implicate him in false and fabricated case is quite deplorable. The Congress workers are agitating against the BJP plot and ED machination. He said that the Congress has been in favour of fair and true investigation.

Meanwhile sensing the mood of the ED, the Congress is getting ready to launch a protest agitation at much wider scale. The party has summoned all legislators from the states to the national capital as it intends to intensify its protests against BJP’s ‘political vendetta’. Though the Congress leaders have not raised their voice against summoning of Sonia Gandhi on June 23, they have their point that she could have been given time at least for a fortnight.

She has been released from the hospital but she continues to be vulnerable. The ED will grill her. The ED director and other officials are aware of the consequences of their interrogation yet they are not willing to give her time and space. This underlines the design they are pursuing.  The Congress leaders say that heaven will not fall if she is allowed a breathing space for a fortnight. She was discharged on Monday from a private hospital in Delhi where she was admitted for coronavirus-related complications.

The hatred towards the Gandhis the BJP leaders nurse is also manifest in their describing Gandhis as “fake Gandhis”. They even alleged that the “fake Gandhis” are causing destruction around the country by burning buses and trains. One of the spokesperson even quipped; “No one is Queen Victoria or Prince in this country that they won’t be probed, law is equal for all. Everyone is probed for corruption”. His words betray the impression that he does not know that Queen Victoria is also answerable to the law of land. (IPA Service)

Droupadi Murmu Is A Sureshot Political Choice Of BJP For Presidency