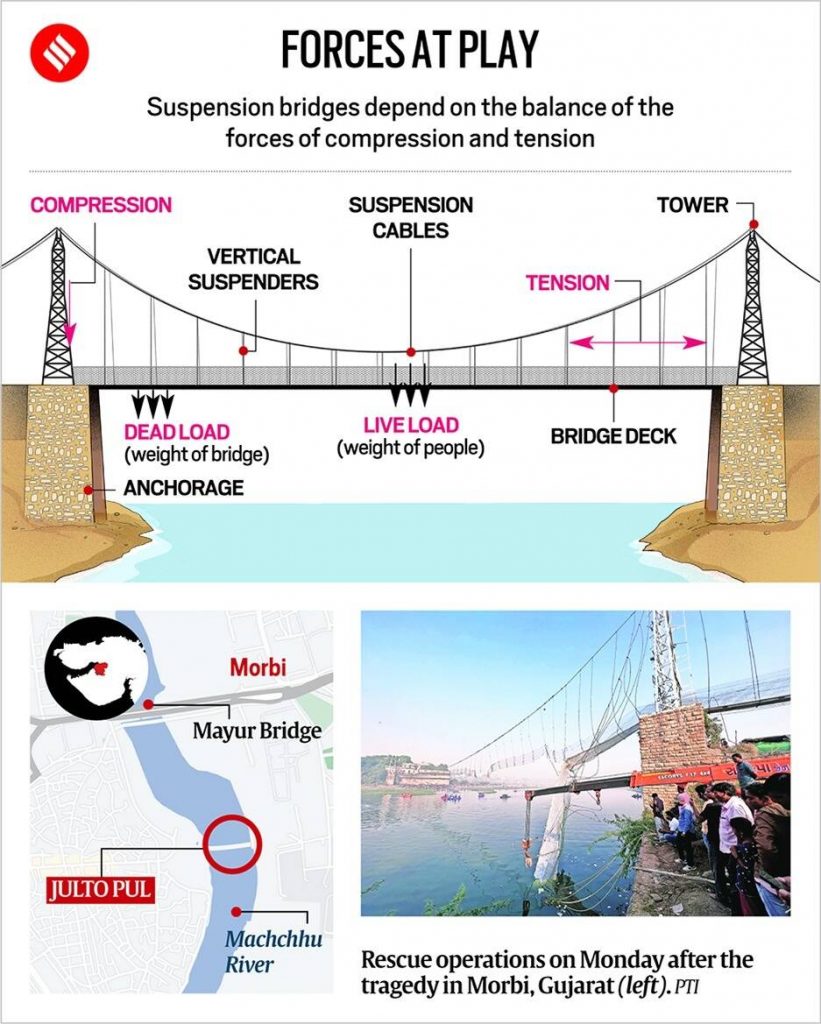 Funny things have been happening in Morbi Gujarat where a 143-year-old suspension bridge collapsed under the weight of its own expectations, killing 135 including 50 children. If the bridge was brought down by criminal negligence, nobody seems bothered, least of all the state government.

In Gujarat under the pall of gloom on the banks of River Machchhu, there appears to be no hurry to get to the truth. Social media is full of the story that one-third of the estimated 300 people on the bridge on the fateful day were there for the fun of kicking and swinging the cables holding the bridge over the Machchhu.

The man who reopened the bridge is now on the run, the topmost executive of the firm ‘Oreva’, which had won the contract to “run” the bridge and make money while doing that like any profitable enterprise. The ‘Oreva’ of the Ajanta Group had allegedly further “sublet” the contract, like many do with impunity.

Like said, funny things have been happening in Morbi, morbidly funny things, fit for any edition of the ‘Gallows Jokes’. But it was not funny that the man-made tragedy was the worst nightmare the Gujarat government, and Prime Minister Narendra Modi, could have ordered for an after-dinner siesta.

Funnier still that Prime Minister Narendra Modi decided to visit Morbi and the local administration was fit to be tied. Ground Zero had shifted from collapsed bridge to down-at-the heels Morbi Civil Hospital. So, the hospital got the quickest overnight makeover in its living history and Modi didn’t have to step over castaway bandages, and leftover syringes.

If only half such enterprise had been devoted to the hanging bridge with its British hangover, its maintenance and its running, the 135 happiness hunters wouldn’t have died. And it wouldn’t have looked like the Gujarat government was doing everything to save the hides of Oreva executives, and of those who run the Morbi municipality; perhaps to save politicians; BJP state ministers, and those who awarded the contract to Oreva.

The bridge collapse reeked of fraud and cash exchanges. There are some very scared people out there in Morbi, Gujarat; people who pocketed money and now must be losing lousily earned sleep. But no need to actually worry, because post the fall of the bridge, ’Operation Bridge Cover-up’ is in full swing and unlike the swinging suspension bridge, this operation will not fail and fall.

That the FIR doesn’t name anyone is just the tip of the iceberg. The fact that ‘sabotage’ is one of the points of inquiry opens a route to redemption. Being Gujarati is guaranteed to be smarter than any other ‘being’ on the planet. The Gujarati has a way about him that is seldom seen in one who is non-Gujarati.

Don’t forget Gandhi, Patel, Modi and Amit Shah. Gautam Adani and Amabani, Nirav and Choksi. All of them Gujarati. People who get things accomplished far better than other people. It can be safely said that more than 75 percent of the ‘India story’, and 99 percent of the ‘New India story’, was written by the Gujarati.

Not funnily enough, the Morbi bridge collapse and the deaths visited on unsuspecting families makes people think. Like the Congress leader said, “God’s message to Modi ji”. What could that message be? Can’t be anything else other than “buddy, your time is up!”

How many years has Modi had Gujarat in his thrall, 27 years? It cannot be possible that the people of Gujarat do not want change, wish for an end to having Modi directing their lives like there was nobody better Gujarati than Modi Gujarati! They must surely be tired by now, after 27 years of hearing “Mitron”, or do they want more “Mitron” than they already have.

Perhaps, the Gujarati hasn’t got tired of “Mitron”, not yet. Modi’s hold over the Gujarati is hypnotic, settled deep in the Gujarati psyche, entrenched and self-sustaining. Even painful Morbi bridges don’t break the link. Modi has the Gujarati hook, line and sinker. Nothing, not even the pain of death can undo Modi.

And Modi appears to be taking the bridge collapse and the 135 deaths in his stride, behaving as if nothing that happened was out of the ordinary. But then, that’s how it has been, right from the beginning, right from 2002. Modi has Gujarat hanging to his every word, and action. The fact that there are no names in the FIR should not surprise anyone. Gujarat under Modi’s thrall has been zombie-like. (IPA Service)

It May Be Time To Consider Setting Up Of A Competition Commission For Elections
Posting....