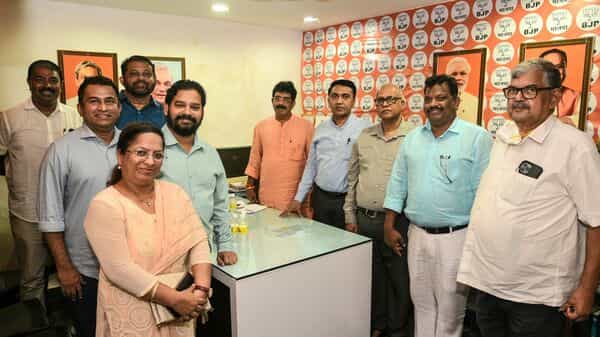 Congress leader Rahul Gandhi might not feel perturbed at 8 of his legislators in Goa switching their loyalty to the BJP but at the same time he cannot ignore the fact that this is a red alert for him and his party. It is an open secret that no leader worth name, except Rahul, is in the position to make a policy decision. To be fair enough to Rahul, he must lend his ears to the common peoples’ observation, undoubtedly induced by the rhetoric of the BJP leaders, on this incident. They echo the jibes of the BJP leaders “if Rahul cannot unite his own party men how he can claim to unite the country?”

During eight years of his rule, Narendra Modi has been consistently trying to project Rahul as a naïve and indecisive youth. Modi-Shah combine has in the prevailing political situation been resorting to this tactic to break his party and make the people believe that he is not capable enough to manage his own party. Since they cannot publicly deride his Yatra, they have been taking an indirect rout to create confusion in the mind of the people. Rahul ought to take this signal seriously.

Modi-Shah engineering a split in the Goa Congress is a part of this strategy. The BJP in the state enjoys sufficient majority. But even then, they motivated 8 Congress legislators to shift their loyalty. Ironically these legislators had sworn before their deity Mahalaxmi that they would ever remain loyal to Congress. For Modi loyalty can be purchased to show Congress and Rahul in utterly despicable position.

Nonetheless this move of the BJP coming at this time ought to be not seen as an isolated action. This coming at the time when Rahul has been on the streets leading his Yatra, has wider implication. A feeling also grips the minds of the people that Rahul has kept his eyes shut towards such desertion as he is giving opportunity and space to the leaders who are keen to cross the side. This is a kind of self-rectification of the party. Rahul has been feeling disgusted with the mode of functioning of such leaders. They did not throw their full support to him in the 2019 Lok Sabha election. In fact, some of them were found to be working against the interest of the party. His disillusionment was the prime reason for quitting the office of the president of the Congress.

Even today he is not feeling convenient with such leaders. This is the primary reason, according to some senior leaders, that he refrained from coming out with his views on their leaving the party. He did not make any attempt to enter into dialogue with these leaders or persuade them to reconsider their actions.

Though Rahul has christened his march as Bharat Jodo Yatra, the general secretary of the party Jairam Ramesh, in the light of his disenchantment, has emphasised that the Yatra is for revival of Congress, not for Opposition unity. He pointed out notwithstanding Rahul strongly favouring a strong bond and unity amongst the opposition parties, the opposition unity is definitely not on the priority list at this stage. The leadership cannot aspire to defeat the BJP on the strength of these leaders who are not committed to the ideology of the party and its programmes. If the leaders were really committed to the party’s ideology and the values it stands for, they should not have deserted it.

They nurse the feeling that Modi juggernaut cannot be stopped without mustering party’s inner strength. They further point out that though the opposition parties were present on the electoral horizon, they could not check the onslaught of Modi in 2014 and 2019 as at that point of time the Congress could not set its house in order.

As if targeting Rahul was not enough, the BJP has also brought about major changes in its strategy of attacking him and Congress. Just within a week, suddenly the politics of the country has acquired a new dimension and character. So far, the Indian politics featured a clash between the RSS and BJP led by Narendra Modi on one hand and pitted against them were the leaders of the opposition parties, especially the Congress.

Amit Shah’s emphasis on punishing Uddhav sends a clear and loud message that the political hegemony of the Marathas must be finished. Shah’s warning: “In politics one can take an insult but not betrayal, and the betrayer must be punished,” must be taken seriously. It is a known fact that Thackerays symbolise the Maratha aspiration and pride. Obviously, his call to punish Uddhav implied that Peshwas, the Brahmins, should strive to marginalise Marathas in Maharashtra’s politics.

Marathas were the most violent tribes in India who established a strong confederacy in Deccan region. They came on the ladder of politics and rule, after the death of Mughal Emperor Aurangzeb. Shivaji established an independent Maratha nation in 1674. Peshwas were the loyal ministers of Maratha state who were appointed to assist the king in different administrative as well as political affairs. Among seven Peshwas, Balaji Rao I was the ablest Peshwas, and rest were very weak.

In recent times the leaders from Peshwa community somehow lost their grip on the state’s politics. The Marathas came to have a firm control on the state administration. In the wake of Gujarat’s claim that the then Bombay should go to them, Marathas had fought a fierce struggle against the Gujaratis. Unfortunately in recent months the Gujarati versus Marathi issue was once again raised by some BJP leaders.

Incidentally in Independent India Marathas have retained their clout in Maharashtra’s politics.  If Maharashtra has had more than 60 per cent of its chief ministers from the Marathas, the community has a fair representation in the cabinet or in the state assembly. Worth noting that when the Supreme Court quashed reservation in jobs and education to Maharashtra’s politically dominant Marathas, every political party came forward to position itself. Political outfits cannot afford to be seen against Marathas that constitute almost 33 per cent of the population. The top category in the Maratha stratification, no matter which party is in government, has enjoyed the fruits of power.

As the Congress party’s position declined in the state, Marathas searched for alternate forum for ventilating their grievances. The Nationalist Congress Party (NCP) did become a party of the Marathas in the late 1990s. At the same time, Shiv Sena emerged as the main face of the Maratha aspiration. Due to their numerical preponderance, Marathas have always remained an indispensable force in the state’s politics and, therefore, were also able to retain formal power.

One thing is absolutely clear that this strategy of Amit Shah of projecting Gujarat lobby as the role model is destined to backfire.  To assert the Gujarat hegemony only on Tuesday the Vedanta-Foxconn shifted its project from Maharashtra to Gujarat. Though Maharashtra government was in talks with the mining conglomerate and the Taiwanese manufacturing firm to set up a semiconductor plant in the state, the decision to shift came at the late stage under the Central government’s directive.

In fact, in recent months Modi is being accused of ignoring the interest of corporate houses operating in other states and patronising two corporate giants Ambanis and Adanis. Rahul has in fact coined the slogan “ham do hamare do”. But one thing is certain that will not augur well for the Modi-Shah combine. Even some senior BJP leaders from other states do not endorse this Gujaratisation of the Indian politics. (IPA Service)

Girls Between Hope And Despair, Failed Mainly By Discrimination
Posting....