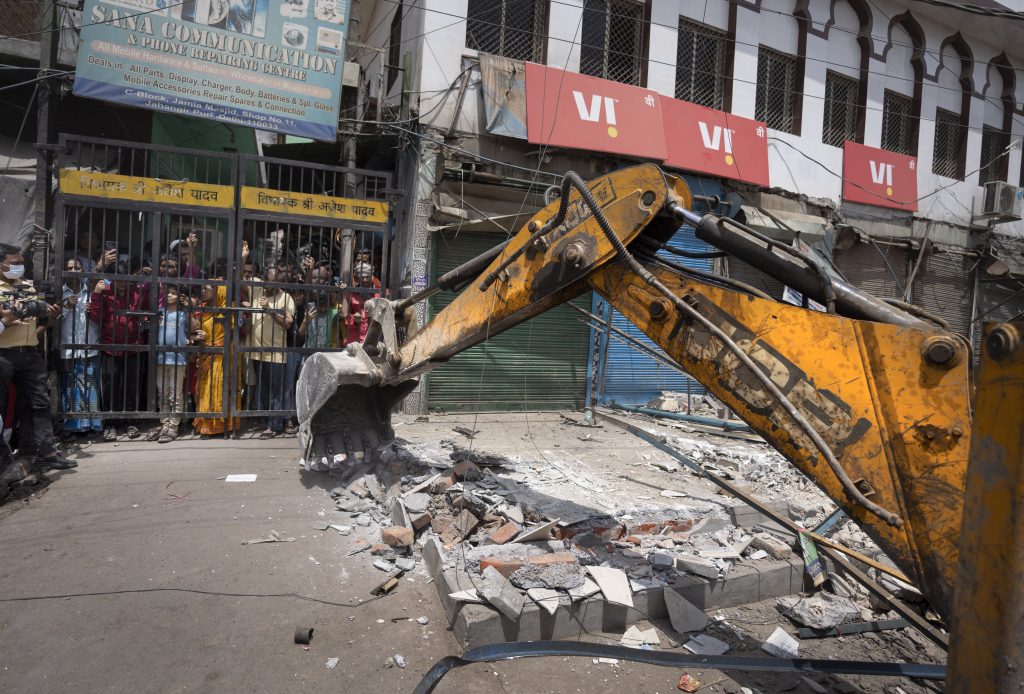 The case of the Jahangirpuri demolition drive can be rightly termed a curious case, if only because one of the petitioners, Ganesh Kumar Gupta, whose juice shop was demolished by the North Delhi Municipal Corporation (NDMC), is the best friend of the BJP government at the Centre. Gupta is proof that the Modi Government was being unjustly blamed for targeting only one religious community.

Gupta by his very name and religious affiliation made a mockery of the allegation. Whoever thought up the bright idea to make Gupta a party to the case shouldn’t have jumped the gun. Now, ‘Hanuman-bhakt’ Ganesh Kumar Gupta, couldn’t be a better ‘secular’ flag-bearer for the so-called Muslim-baiting Bharatiya Janata Party.

Also, now, the top court has told the parties involved to stick to “status quo” with the warning that “will take serious view of all action after status quo order was passed.” The last time, the apex court said “status quo be maintained”, status quo was not maintained. The anti-encroachment drive in Jahangirpuri continued as if everybody was hard of hearing.

This when people left and centre flogged the political horse for one more, the last, drop of blood. And when AIMIM leader Asaduddin Owaisi landed late in the evening in Jahangirpuri, the BJP couldn’t contain its glee. Whoever it was who said the AIMIM is the ‘B-team’ of the Bharatiya Janata Party knew something more than the rest of us combined.

Delhi’s Jahangirpuri is only the latest playground of the BJP’s bulldozer. A SC bench consisting of Justices L Nageswara Rao and B R Gavai heard the case. This when #judges, #SupremeCourt, #KapilSibal and #judiciary trended. The previous day, seven bulldozers had razed “extensions” made to several structures, including those of a “place of worship” in Jahangirpuri

Of course, some “innocent” residents of the Muslim-majority locality were arrested by the Delhi Police after the “recovery” of a few sharp-edged weapons and a number of “small arms,” loosely termed “kattas” or country-made guns.

Meanwhile, it has come to light that one Dileep Saxena’s fruit-juice stall was also destroyed, another example of the BJP’s impartiality.  But the BJP bulldozer has an  Achilles heel: None of the bulldozers, whether those in Uttar Pradesh or those in Khargone, Madhya Pradesh, even the ones in Delhi, were used after notices were issued. Saxena swears he did not get the missing notice.

Anti-encroachment drives do not mean everything in the path of the bulldozer is partridge for the course, marked for death in the transfixing glare of the bulldozer’s headlights. The Modi Government cannot be let off easily for wrongs committed. The Supreme Court’s ruling that “sinners also have a future” does not apply to BJP-ruled states and the Union Home Ministry.

Our country’s Supreme Court does give the impression it’s more powerful than the Centre. The mere mention of “we will take a serious view of all demolitions” is chilling with all its possibilities. It left many of the capital’s demolition crews transfixed. “Issue notice in all petitions. Status quo to be maintained. To be heard after two weeks,” said the top court.

Among the top lawyers fighting the cases are Dushyant Dave and Sanjay Hegde, who is pleading for a victim of the drive. “I told them about the Supreme Court order, yet they continued with the demolition.” Hedge is a regular in cases that are lodged to teach a lesson or two to the BJP. He argued for the petitioners in the hijab row case.

In fact, when top lawyers like Dave, Hegde and Kapil Sibal aren’t arguing for VVIPs, they’re taking up cases that line up the Modi government for the kill.  The demolitions do give the impression that the Modi Government is diligently targeting the homes and buildings of people of one community alone, whether it’s in Madhya Pradesh, Uttar Pradesh or in Rajasthan.

But sometimes what you see in the mirror is not what it is, and where it is. The communal disturbances and demolitions in Jahangirpuri are being taken advantage of by unsavoury elements for whom it doesn’t make much of a difference whether the Hindu strikes or the Muslim gets hanged.

Then again, who gets arrested and for what is random in BJP-ruled states. Imagine a police team from BJP-ruled Assam cutting across the Great Plains to BJP-ruled Gujarat to take into custody Jignesh Mevani for a tweet that took the names of Modi and Godse in the same breath! (IPA Service)

May Day This Year Throws Up Big Challenges For Indian Working Class
Posting....