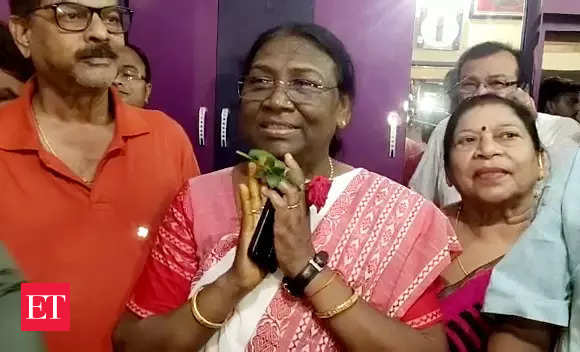 The Bharatiya Janata Party (‘BJP’) is widely denounced as an elite party most. justifiably so, as it has, through its two tenures of rule and much before that, engaged in the political sphere through a creedal backbone of Hindu, upper-caste interests. However, ever so often, the caste and class composition of BJP’s voter base confounds commentators.

The nomination of Scheduled Tribe politician Draupadi Murmu as the presidential candidate, for instance, put critics in the uncomfortable position of deciding whether such a move by the party incumbent is an instance of on-brand tokenism, or a sign of against-the-grain inclusivity. Shrouded by its almost decade-long unequivocal malfeasance in all matters of polity, there exists a grassroots history to BJP that lives on as a legacy in the minds of some of its most loyal voters – the poor and the backward.

Years before the historic rise of BJP to the central stage of Indian politics, grassroots mobilisation by the party happened on ideological grounds, spanning the cultural and social milieu of the late 20th century. Hindu nationalism as a project held an irresistible appeal to a certain identity of citizens – the upper caste Hindu, middle or upper class, in urban households. Its ideological sympathy to Vedic rationalisations of the caste system, and invocations of a glorious Hindu past, obviously held little appeal to lower-castes in most of the country. Sure of its core, elite, voter-base, a novel strategy had to be devised by the Hindu nationalist party to gain victory, especially after the 2004 defeat of its ‘India Shining’ campaign.

Indian-American political scientist Tariq Thachil, in his book ‘Elite Parties, Poor Voters: How Social Services Win Votes in India’ (2014), has studied how, throughout the 1990s and 2000s, BJP continually attempted to make inroads amidst poor and lower-caste voters by the rigorous deployment of a separate division of party cadres (seva vibhag) in remote rural and peri-urban areas for the purpose of provisioning social goods and services to lower-caste voters.

Thachil writes about the increasing presence of BJP cadres at the grassroot levels, from where they would gain support of communities in small Indian villages and slums adjoining towns in parts of central and northern India, especially the marginalised groups, hitherto unrepresented and neglected under the governance of the Indian National Congress (then in power as the United Progressive Alliance collate).

Grassroots-level provisioning of public goods and services (medicines, utilities, even teachers providing primary education) happened in the highly organised fashion so characteristic of the BJP. Activists within BJP, in this manner, acted as agents of material social change in remote areas amongst the rural poor, lower castes and amongst tribals, and eventually gained the trust and support of people there.

The paradigmatic differences between left and right wing in terms of policies of redistribution and regulation, do not hold particularly true for poor and developing nations of the world in the same sense as they do in Western electoral arenas. Subaltern electoral choices can be tricky to unfold, even in the face of extreme alienation cast by parties as communal and polarizing as the BJP. With public institutions and services acting as rigged rigmaroles facing away from the poor, political patronage can be the only way the poor see any form of benefits from the State or its agents.

Let’s take the BJP’s current stronghold, Uttar Pradesh, as a case in point. In March of this year, following a clean sweep in the Assembly elections of 2022, the BJP had historically defended its control of the state of Uttar Pradesh for two consecutive electoral terms. Women, who showed little support for the BJP in the 2017 elections, voted in large numbers for the incumbents in 2022.

In the Nighasan constituency of Lakhimpur Kheri, the largest district in Uttar Pradesh, which was also an important centre of the farmer’s movement, 60,000 more voted for the BJP in 2022 compared to 2017. Notably, Lakhimpur is where, in October 2021, a BJP Union Minister of State’s son allegedly mowed over and killed four protesting farmers and a journalist, apart from injuring ten more farmers. BJP won all eight seats in this district.

Some have attributed this intransigence of the public in repeatedly voting for BJP to fear (as in the case of Lakhimpur Kheri); others to the ability of the party to interpolate its ideological stance into a variety of local, region-specific contestations. However, it is imperative that we do not underplay the political agency of large groups of people in making an informed choice based on personal or group interests.

Interestingly, the profile of the average BJP voter in UP has shifted away from its original markers (male, urban, and young to older, rural women), a change that is linked to an increase in numbers of women-centric welfare schemes and programmes implemented under the BJP government, and a greater importance assigned to rations by female voters compared to male ones.

The share of Dalit votes to BJP in UP, too, has increased by 10 per cent, making the party equally representative of the interests of the socially oppressed classes as the Bahujan Samaj Party, at least on paper. Ostensibly, this has been achieved through a combination of the party’s repeated assertions that they are attempting to bring formerly untouchable castes into the Hindu-fold. Another reason is the impact of welfare schemes, such as subsidized medicine and healthcare for marginalized communities under the Pradhan Mantri Bharatiya Janaushadhi Pariyojana, or provisioning Antayodaya (below poverty line) households with ‘double ration’ for ‘free’ under the Pradhan Mantri Garib Kalyan Yojana (‘PM-GKAY’).

What the party could earlier only achieve through non-party affiliates and informal mechanisms (in the case of seva vibhags), it can now achieve through official State apparatus – the Public Distribution System (‘PDS’) and a variety of public provisioning schemes to target poor voters, aided by official ledgers and data. It may be important to note that while the state of UP already had the most number of beneficiaries from government schemes and programmes, months before the Assembly elections, PM-GKAY was called the “biggest ration distribution campaign” in the history of India.

BJP’s strength lies not merely in the opportunism granted by the division of religious and caste identities, but also the projection of economic growth and welfare tied strongly to the party’s core symbology from the very beginning. Swachch Bharat, ‘Make in India’, Aatmanirbhar Bharat, Ayushman Bharat Yojana (health insurance aimed at low-income individuals), among several others, have entered the vocabulary of the rural and urban poor as seamlessly as Garibi Hatao, Desh Bachao of former Prime Minister Indira Gandhi’s time.

In fact, the image of ‘new India’ envisaged by BJP does not even entirely rely on conventional slogans of the ‘eradication of poverty’ such as Garibi Hatao, or traditional promises of public distribution such as ‘Roti, Kapda, Makaan’.

Rather, in the manner of ‘developed’ economies, so to speak, it envisions a digitized spectrum of social security – through direct cash transfers and financial inclusion, such as the Prime Minister Jan Dhan Yojana, which is essentially an Aadhaar-enabled bank account and payment system, providing the user with a RuPay card which also doubles as an insurance card under the Pradhan Mantri Jeevan Jyoti Bima Yojana. Together, these are well known as the ‘JAM Trinity’ and see the participation of rural-pastoral citizenry in sophisticated financial relationships with the State.

Even the content of many of Prime Minister (‘PM’) Narendra Modi’s speeches often (but not always) distance themselves from the image of religious fundamentalism and polarization, found so abundantly in the public addresses of local cadres and even those of more popular BJP leadership. The PM’s speeches instead try to anchor themselves to legitimate State mechanisms (‘government’ rather than ‘party’), and to the idea of economic progress and development ‘for all’.

While strongly communal in its overall outlook, the party’s leadership and manifestoes try to posit their commitment to welfare and reservations for Scheduled Castes, Scheduled Tribes, and ‘general category’ poor (Economically Weaker Classes), subsidies and waivers for farmers, pensions and mid-day meals, housing schemes, and infrastructural growth and privatization aided by home-grown industrialists.

In states such as Chhattisgarh, Tamil Nadu, and Himachal Pradesh, programmes such as mid-day meals, old-age pensions, the Mahatma Gandhi National Rural Employment Guarantee Act and job schemes, and importantly, the PDS, have been key in the overall reduction of poverty and improving household consumption.

There are over 130-food related schemes in India, many of which have been implemented in the BJP’s last two terms. In states such as Chhattisgarh, where the PDS ensures that the valid ration card holder is entitled to 35 kg of rice at the cost of two or three rupees per kg, the poor tend to rely on the PDS as a sole source of survival.

The poor in India, those below the poverty line (earning 673 rupees per month at 2009-10 prices) cannot afford rice at market prices, and in some cases, even prefer rationed goods over the option of direct cash. During the 2022 elections, the states of Uttar Pradesh and Uttarakhand, where the flagship scheme PM-GKAY and others such as PM-Kisan Samman Nidhi have benefited over half the total households, BJP saw its leadership being comfortably reinstated.

A 2013 comparative study of Tamil Nadu, Bihar and Chhattisgarh, carried out by economists Reetika Khera and Jean Drèze analysing the impact of PDS on poverty levels in the states had revealed that in states such as Chhattisgarh, where the PDS functions in a relatively reliable manner (resulting in a lower poverty-gap index), the proportion of beneficiaries surveyed who would opt for an equivalent cash-based programme to replace PDS was low (only two per cent, compared to 54 per cent in Bihar). In the case of BJP-ruled UP during the pandemic, the beneficiaries didn’t have to make a choice at all – they were given both free rations and direct cash transfers; a highly attractive prospect for poor voters.

While the loss of faith in BJP is imminent amidst those elites disillusioned by the incorporation of varied interests, including those of Dalits, the party in power is simultaneously able to make up for this loss through its appeal to a larger section of the population – marginalized sections who would have otherwise voted for a representative dedicated solely to their social interests, and perhaps lacking the political clout to execute schemes of such great significance.

In conclusion, BJP’s success is bolstered both through the attractiveness of its ideological underpinnings, as well as its, even if superficial, promises of public good ‘for all’ and for targeted groups of poor. Through the welfare plank, BJP has, over time, managed efficiently to further its political interests with the oppressed castes and classes (and gender), and gain political expediency by way of newer, more diverse profiles of voters. (IPA Service)