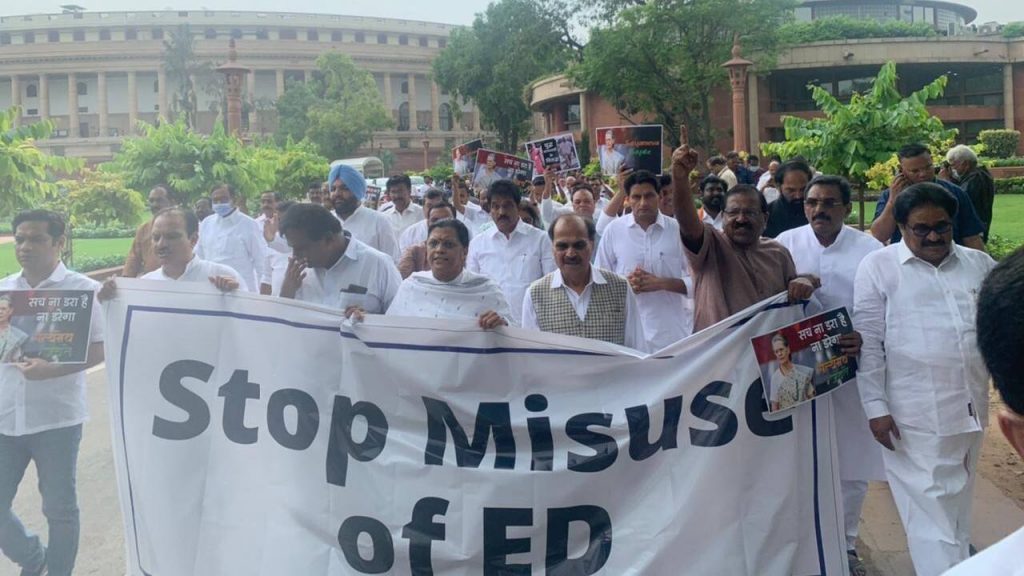 All over the country mass protests were held by the Indian National Congress workers, while several senior party members were detained outside the All India Congress Committee (AICC) headquarters in New Delhi on Thursday. The Congress leaders were registering their protest against the Enforcement Directorate’s questioning of party president Sonia Gandhi in an alleged money-laundering case linked to the National Herald newspaper. Senior leaders, such as Shashi Tharoor, P Chidambaram, Ashok Gehlot, Sachin Pilot, Pawan Khera and Jairam Ramesh, were among those detained. The Congress has termed these protests ‘Satyagraha’, or struggle for truth. Meanwhile, leaders of 13 political parties met at Parliament House and condemned the ED action against Sonia Gandhi in a written statement. Veteran leaders of the Congress, as well as other prominent parties, including DMK, CPI-M, CPI, IUML, NC, TRS, MDMK, NCP, VCK, Shiv Sena, RJD and RSP, were present at the meeting.

Odisha Chief Minister Naveen Patnaik is known for outsmarting the opposition. Patnaik’s masterstroke has not only established Droupadi Murmu’s election as the next President of India, but also left many in the Opposition with little choice. Even Mamata Banerjee, a vociferous critic of Prime Minister Narendra Modi, is forced to walk a tightrope. Now, the BJD has announced the support for the NDA Vice-President candidate Jagdeep Dhankar. The announcement came following a telephone call by Prime Minister Narendra Modi to Chief Minister Naveen Patnaik. The BJD’s stand on the Vice-President candidate seems to have completely changed the political character of the party which has long followed the equidistant theory. In its turn, the Congress has criticised CM Patnaik’s decision and claimed there’s little difference between the BJD and BJP.

CONGRESS BETS ON DKS TO OUTFOX YEDIYURAPPA IN KARNATAKA POLLS

With assembly elections around the corner in Karnataka, the spotlight seems to be on former Chief Minister BS Yediyurappa. Even as the Congress harbours plans to garner the Lingayat vote bank in addition to its strong base of AHINDA (Minorities, Backwards and Dalits), the party’s goal now is to win over the Vokkalinga community by keeping DK Shivakumar in the forefront and supporting him as an alternative to Yediyurappa. However, it’s no mean feat. BJP leader Yediyurappa is considered a tall leader of the Lingayat community, who has been the CM four times, but not lasting a full term even once. Realising the importance of the BSY factor that will play a very important role in the 2023 elections, sources say BSY was offered the governor’s post several times, but he turned it down every time. The idea behind the offer was to make him politically redundant, while also appeasing anger of the Lingayat community. However now, with the elections looming, the BJP leadership once again seems to be banking on the political stronghold of BSY.

In a move to stoke the nationalist fires, the Eknath Shinde-BJP alliance government in Maharashtra has announced the restoration of a pension scheme for political activists who were imprisoned during the Emergency imposed by the then Prime Minister Indira Gandhi during 1975-77. Expectedly, the state Congress has criticised the move, asking how could Chief Minister Shinde, the leader of the rebel Sena faction, clear the decision, which, the party claimed, was against the belief of the Shiv Sena founder Bal Thackeray, who had openly supported the Emergency. The scheme was initially launched by the Devendra Fadnavis-led BJP-Shiv Sena government in 2018. It was dismissed in 2020 by the Uddhav Thackeray-led Maha Vikas Aghadi (MVA) coalition government which included the Congress and the NCP as partners besides the Sena.

The Congress will start Bharat Jodo Yatra from Kanyakumari to Kashmir in the month of August and former Congress president Rahul Gandhi will lead the padayatra. The padyatra (march) will cover a distance of 3,500 km and go through about 12 states and two union territories. The yatra will include padayatras, rallies, and public meetings, which will be attended by the senior Congress leaders including Sonia Gandhi and Priyanka Gandhi Vadra. Former Uttarakhand Chief Minister and veteran Congressman Harish Rawat has said that the Congress’s ‘Bharat Jodo Yatra’ from August 9 to 15 will be a show of protest against the oppressive and hate-mongering policies of the central government. He said that former party president Rahul Gandhi would lead the journey from Kashmir to Kanyakumari. A committee led by former Madhya Pradesh chief minister Digvijaya Singh has been formed to plan for the ambitious yatra that aims to spread the message of unity across India and mark the Congress party’s first pan-Indian march in Independent India. The central planning group for the coordination of the Bharat Jodo Yatra, the Congress party’s biggest non-electoral campaign, will have Digvijaya Singh, Sachin Pilot, Shashi Tharoor, Ravneet Singh Bittu, KJ George, Jothi Mani, Pradyut Bordoloi, Jitu Patwari, and Saleem Ahmed as its members. States such as Tamil Nadu, Kerala, Karnataka, Madhya Pradesh, Maharashtra, Gujarat, Rajasthan, Uttar Pradesh, Haryana and Punjab are likely to be covered by the padayatra. (IPA Service)