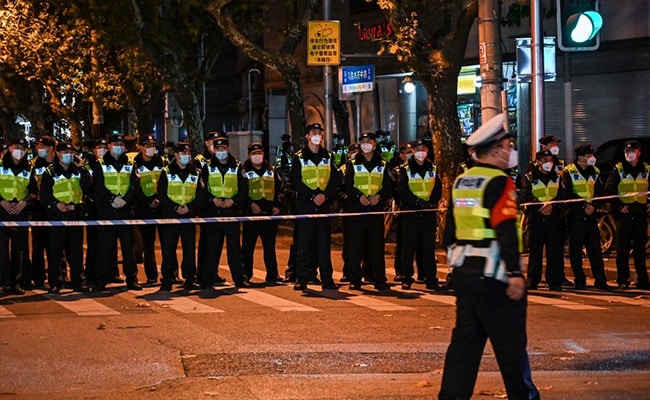 Hundreds of people took to the streets in China’s major cities on Sunday to protest against the country’s zero-Covid policy, in a rare outpouring of public anger against the state.

A deadly fire on Thursday in Urumqi, the capital of northwest China’s Xinjiang region, has become a fresh catalyst for public anger, with many blaming Covid lockdowns for hampering rescue efforts. Authorities deny the claims.

On Sunday night, at least 400 people gathered on the banks of a river in the capital Beijing for several hours, with some shouting: “We are all Xinjiang people! Go Chinese people!”

AFP reporters at the scene described the crowd singing the national anthem and listening to speeches, while on the other side of the canal bank, a line of police cars waited.

Cars honked in support as people remained in the area until the early hours, chanting and waving blank sheets of paper symbolising censorship.

Authorities blocked the road to stop cars passing, and around 100 plainclothes and police officers arrived on the scene.

At around 2:00 am (1800 GMT) they were joined by coaches of paramilitary police.

Eventually protesters agreed to leave after making officers promise their demands had been heard.

In downtown Shanghai — China’s biggest metropolis — AFP saw police clashing with groups of protesters, as officers tried to move people away from the site of an earlier demonstration on Wulumuqi street, named after the Mandarin for Urumqi.

Crowds that had gathered overnight — some of whom chanted “Xi Jinping, step down! CCP, step down!” — were dispersed by Sunday morning.

But in the afternoon, hundreds rallied in the same area with blank sheets of paper and flowers to hold what appeared to be a silent protest, an eyewitness told AFP.

Social media videos from the area that appeared to be taken in the late afternoon showed the crowd chanting.

By evening, dozens of policemen in yellow high-vis jackets formed a thick line, cordoning off the streets where the protests had taken place.