Could Sharad Pawar Be Chosen As New UPA Chairperson? 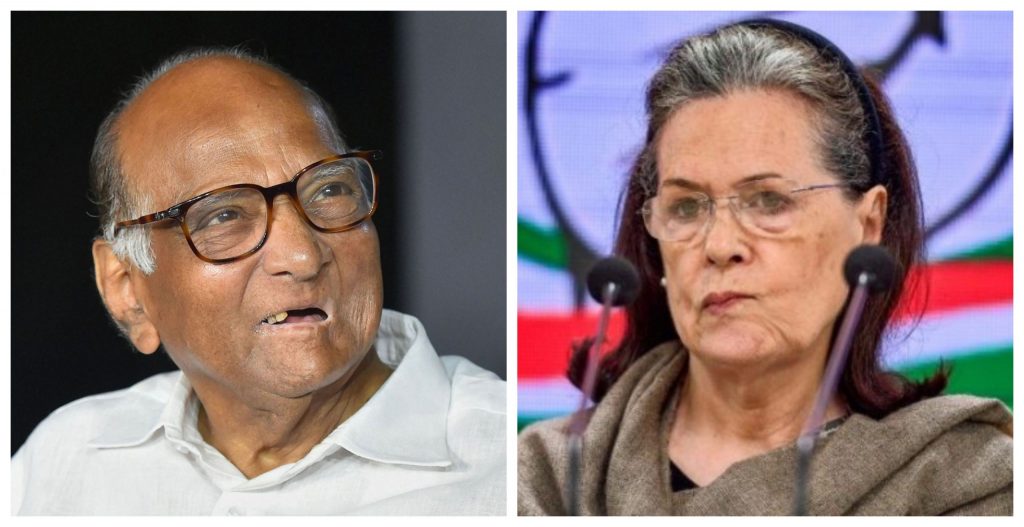 After the bleak show put up by the Congress in the five recently held state assembly elections, lingering questions about its ability to lead the United Progressive Alliance (UPA) any longer have been doing the rounds. Sensing an opportunity, the NCP is pushing the candidature of its senior leader Sharad Pawar as the head of the UPA/anti-BJP coalition. Pawar is taking initiative to unite thenon-Bharatiya Janata Party parties with an express intention to form a national front that can take on the BJP. The process has gained steam with Shiv Sena leader Sanjay Raut batting for the NCP honcho, saying that the veteran has the ability to bring all non-BJP parties under one umbrella ahead of the 2024 Lok Sabha polls. The NCP’s youth wing had in a recent meeting in Delhi adopted a resolution to make Sharad Pawar the chairperson of the UPA. The resolution, significantly, was passed in the presence of Pawar, but the party has distanced itself from the proposal. As expected, the Maharashtra Congress president Nana Patolehas reacted sharply to the development, saying it appeared to be the individual view of NCP. Significantly, West Bengal chief minister Mamata Banerjee too has said a meeting of non-BJP CMs would be convened in Mumbai soon. There are chances that Pawar will work with Banerjee and Shiv Sena president and Maharashtra chief minister Uddhav Thackeray in this initiative, though there is no formal confirmation from both the Maharashtra-based ruling parties yet. Pawar is known for his personal relations and ties with several prominent opposition leaders. Besides Banerjee, Pawar has amicable bonds with Tamil Nadu CM MK Stalin, RJD chief Lalu Prasad Yadav, Telugu Desam Party chief Chandrababu Naidu, and several of the Left leaders.

Political strategist Prashant Kishor has returned to resolve issues with the Congress to discuss the possibility of working with the party for the Gujarat state elections and 2024 Lok Sabha elections. Sources said that the discussions also include the possibility of Mr Kishore joining the Congress party. Prashant Kishor gained acclaim owing to BJP’s landslide victory in the 2014 Lok Sabha Elections. Kishor’s IPAC has also run successful campaigns for AAP (2015 Delhi Assembly election), Mahagatbandhan (2015 Bihar Assembly election), YSCRP (Andhra Pradesh Assembly election), DMK (Tamil Nadu Assembly election) and TMC (West Bengal Assembly election). However, he failed to propel the Congress-Samajwadi Party alliance to victory in the 2017 Uttar Pradesh polls. Meanwhile, the Leuva Patidar leader, Naresh Patel of Gujarat may join the Congress. Patel is chairman of Shree Khodaldham Trust, which manages the grand temple of Goddess Khodiyar, the patron deity of Leuva Patidar community, near Rajkot. The Congress believes his entry will help attract the Leuva Patidar community to the party. The politically influential community is concentrated mainly in the Saurashtra region.

Bihar chief minister Nitish Kumar has made a controversial statement on alcohol usage by directing his ire at people who consume it, stating that those who drink alcohol are “mahapaapi” (great sinners) and not Hindustaani/Indians. He said this after the state Legislative Assembly passed the Bihar Prohibition and Excise (Amendment) Bill 2022 to dial down on punishment imposed on first-time drinkers. Referring to Mahatma Gandhi, he said that even Bapu opposed liquor consumption and those who go against his principles are “Mahapaapi and Mahaayogya (unworthy)”. “I don’t consider these people to be Indians,” he said. While the Opposition has maintained that the ban on liquor remained only on paper, the BJP had alleged that officers are not strictly enforcing the prohibition law and are using it to extort money from people. The Bihar government has been facing allegations of “ineffective implementation” of the 2016 Act, which banned liquor in the state, and led to hooch tragedies in Bihar.

A protest has been launched by senior Congress leader Rahul Gandhi on March 31 against the steep hike in fuel prices over the last 10 days. Rahul Gandhi said: “In the last 10 days, petrol and diesel prices have increased nine times. We demand that the rising prices should be brought under control.” Congress MPs from both the Lok Sabha and the Rajya Sabha agitated by carrying placards, raising slogans against the government and sitting on a dharna against the rise in price of petrol, diesel and LPG gas. Among those who made their presence felt in the protest included the leader of opposition in Rajya Sabha, Mallikarjun Kharge, and Congress leader in the Lok Sabha, Adhir Ranjan Chowdhury. The Congress is also launching a week-long countrywide protest against inflation and rise in fuel prices.

In a strategic twist, the Congress has now hired poll strategist and former associate of Prashant Kishor, Sunil Kanugolu, to lead the future elections for the grand old party. According to sources, Sunil is expected to commence his task with the coming assembly elections in Karnataka and will, subsequently, also handle the Telangana state election for the Congress. The US-educated former consultant with McKinsey, Sunil Kanugolu, hails from Ballari in Karnataka and will be spearheading the campaign to help the state Congress take on the ruling BJP. Sunil Kanugolu earlier had managed the election strategy for DMK in Tamil Nadu with the sole aim to boost the image of MK Stalin ahead of the 2019 Lok Sabha elections. In Tamil Nadu 2021 assembly polls, the AIADMK had hired Sunil but AIADMK unfortunately lost the assembly elections. Recently, Sunil was hired by Akali Dal, but Akali showcased the worst performance for the party in Punjab. Congress leaders are raising questions on his capabilities by urging that Sunil was unproductive and his strategy had failed in recent elections. (IPA Service)

In Pandemic Period, The Injustices To The Underprivileged Have Increased
Posting....