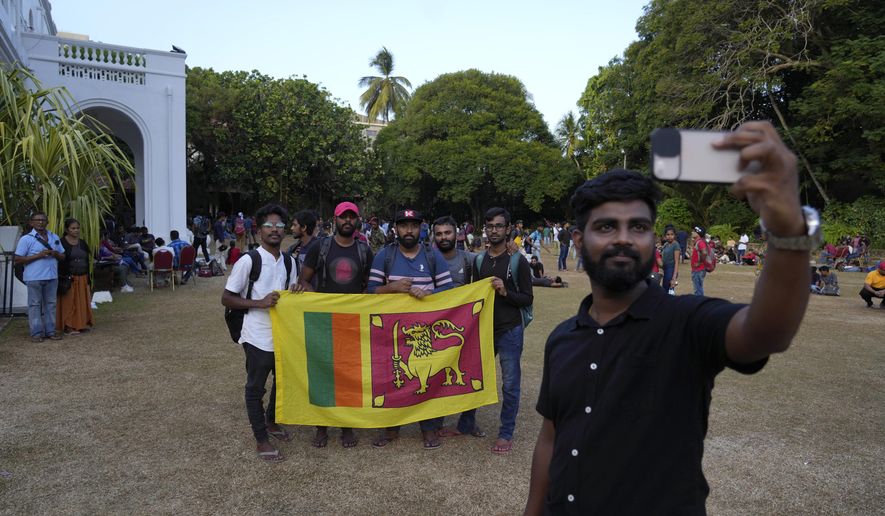 India has a new President, and so does Sri Lanka. But look at the difference. India’s president-elect will ease into her new job while Sri Lanka’s new President Ranil Wickremesinghe has done it with a mixture of unease and determination writ large on his face. What ails his mind would make for dark reading. For starters, he has appointed hardliner Dinesh Gunawardena as Prime Minister, who sent in troops to dismantle protestors and barricades  Both Wickremesinghe and Gunawardena are hardcore Gotabaya Rajapaksa loyalists.

President Ranil Wickremesinghe was Prime Minister to President Gotabaya Rajapaksa, who is a proclaimed absconder having fled the country a week ago. Wickremesinghe’s private residence was torched by the same protestors who had driven Rajapaksa to flee the President’s Palace.

Wickremesinghe will have to toil, enough to break his back. The President has to rewire the economy. Sri Lanka faces soaring inflation, food shortages, scarce meds and low fuel stocks. Sri Lankans are living on one meal a day. Skipping meals and eating less have become a national necessity. The World Food Program has too many mouths on its shoulders to do anything other than feel sorry.

The IMF has a role to play. President Wickremesinghe is reportedly looking for a bailout. The fuel situation needs improvement. Car-snakes are part of Sri Lanka’s urban-scape. Let’s not forget the crisis had started with long queues of vehicles outside petrol bunks. Today, there are no funds to bankroll Sri Lanka to safe-harbour.

Rajapaksa Gothabaya is largely to blame. He was new to politics. And some of his decisions were disastrous. His military background did not help. The Rajapaksas had cleansed Sri Lanka of the LTTE, but there were lots of Tamil “disappeared” and the ire had turned against the Muslim, especially after the Easter Sunday Islamist attacks of 2019.

This had led to the persecution of the minority Muslims. And Gotabaya Rajapaksa came to power on the promise of “putting Muslims in their place”. In fact, the current “uprising” is solely by the Buddhist majority. The Muslims and Tamils have largely kept away.

That said, the Sri Lankan economy also took a hit from Covid. But it was the ban on fertilizers and the organic farming policy that spelled doom for Colombo. Farmers were caught on the wrong foot. Wickremesinghe for obvious reasons refuses to pin blame on China. The “failed fertilizer policy” is a friendly scapegoat.

That said, there’s no denying President Wickremesinghe means business. The journey from Prime Minister to President was so abrupt, that there’s no patience left in him to suffer protestors who are demanding his scalp! Wickremesinghe is seen as a Gotabaya bot. And the ‘bot’ has retaliated with curfew and declaration of a state of emergency.

Wickremesinghe admits that the major shortages of fuel and food were what led to the protests. There wasn’t even gas to cook in tens of thousands of homes. That spells the unrest isn’t going to end soon. The protestors have refused to end the ‘Aragalaya’ or ‘Struggle’. They consider Wickremesinghe “illegitimate”. There are only a few who will give him a chance, the rest would rather see him fail.

Curfew and emergency haven’t helped. They‘re seen as “negatives”. For vast numbers of Sri Lankan people, the only emergency is the food and fuel shortages. The emergency and curfew are basically to protect the President and the MPs, who haven’t been forgiven. Going forward, Wickremesinghe has limited options.

The international community is making all the correct noises. And that includes India. EAM S.  Jaishankar was in Colombo. India has given $3.8 billion in humanitarian aid to Sri Lanka. India is not likely to intervene more fully to help save the “dying country”, as demanded by some opposition parties.

The Modi Government called an all-party meeting to discuss Sri Lanka, a country with which India has fish and fishing problems besides hurting Tamil sentiments whenever they spillover from across the Palk Straits. There are staunch takers for the theory that India is heading for a rendezvous with a Sri Lanka-like crisis.

EAM Jaishankar, however, insists nothing like that will happen. But then, there is no need for a Sri Lanka-like crisis to nail the Modi government’s  hide to the wall. Then again, it might. Both the DMK and the AIADMK want India to rush in with an expeditionary force. It doesn’t gel when those who worship Ravana want to do a ‘Rama’ on the hapless Ranil Wickremesinghe! (IPA Service)