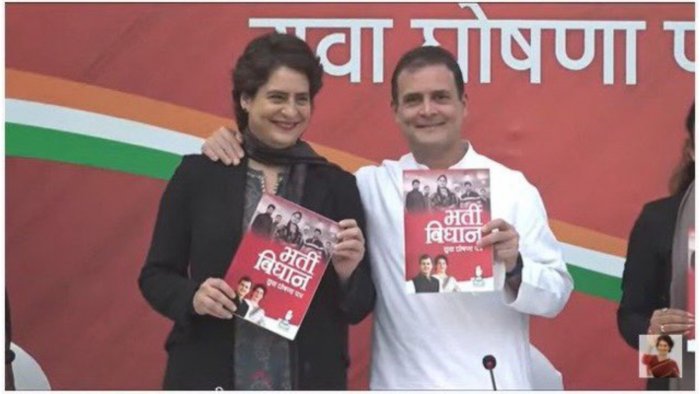 The Congress is being watched, more keenly than ever before, not only by all political parties but also by the people in the country in general and Uttar Pradesh in particular, the state that goes to polls with first phase of voting on February 10. Party’s campaigns for the last six months in the state attracted huge crowds, its promises considerably influenced even the manifestoes of the ruling BJP and its main contender SP released just hours before the end of election campaigning for the first phase, and now its manifesto is going to influenced the whole election campaign of all political parties. It is a significant development in the history of Congress in decades.

At this point of time it is not so important as how many seats the Congress will be able to win in the ongoing Vidhan Sabha election in Uttar Pradesh, but the slow movement of politics it is causing in the state is, which has now become perceivable, and has not only potential to influence the shift of support base of political parties in the Vidhan Sabha election of 2022, but also in the Lok Sabha election of 2024. Congress’s running of political campaigns in this direction for the last six months and also its manifesto is indicative of that.

Congress has been making great promises for quite some time now. Though the party is being considered by the BJP and SP as politically ‘insignificant’ force in Uttar Pradesh at present, they have been in reality compelled not only to take note of the issues raised by Priyanka and Rahul Gandhi and their promises made in the rallies but also their influence is clearly seen in their manifestoes, though some political commentators claim the influence to be partial. Even though we can conclude that it is after decades that the Congress in the state has emerged in a new incarnation that has started dictating issues and slogans in the state politics.

The manifesto of the Congress has thus become an important document for understanding the moves of this Grand Old Party and what and how it is going to regain its lost support base not only in the present state assembly elections of 2022, but also its future plan as to how it is preparing to counter the ruling BJP in the country led by Narendra Modi in the Lok Sabha election of 2024.

Recalling the traditional support base of the Congress that it has lost decades ago which included Dalits, SCs, STs, Muslims, and caste Hindus, will enable us to understand the Congress manifesto released in Uttar Pradesh. The promise of free education to the members of SCs and STs from kindergarten to post graduate level if voted to power is clear indication of the direction towards which the Congress is moving. It is obvious that the party is trying to regains its SC base in Uttar Pradesh that it has lost chiefly to BSP led by Mayawati. Every poll survey in the last few months has been indicating shift in support base of BSP, and hence every political party has been trying to woo the Dalit voters. The manifesto also promises to provide reservation for STs and SCs in promotions.

In Dalit politics in Uttar Pradesh, BSP has considerable support base among a particular sub-caste but not among all Dalits. It is in this backdrop, the Congress manifesto promises to provide the benefit of reservation to people from all Dalit sub-categories. The party has also promised to depute an SC leader as the home minister of UP (since ST population in the state is not considerable) to be able to curb the rising crimes against Dalit community. It does not mean that the party is less attentive on well-being of the STs. The manifesto has actually promised to provide tribal status to Kol community which is mistakenly listed as a Scheduled Caste in Uttar Pradesh while they are listed as Scheduled Tribes in other states such as Madhya Pradesh, Chhattisgarh, and Jharkhand.

Congress manifesto has also tried to recover its lost support base among  Muslim especially since demolition of the Babri Mosque and rise of communal politics in the country. The BJP became the chief beneficiary of the consolidation of the Hindu votes, while Muslim votes shifted away from the Congress and acquired strategic pattern. They started voting in favour of either SP or BSP depending on their candidates’ winnability on a particular constituency against the BJP candidates. It is to recover the loss a commission has been promised to look into the needs of ‘pasmanda’ (poor) Muslims and to draw a plan for their upliftment.

“The Congress manifesto is not just a bunch of promises made in the poll season. A lot of hard work has gone in the development of this document which is a blueprint that also shows how the promise will be fulfilled,” said Priyanka Gandhi. However, it was an underestimate, since the manifesto does not only target the promises to be fulfilled but to regain its political support base among all religious communities and castes.

Congress is giving special attention to the well-being of farmers. They have already emerged as a political force not only in the Western Uttar Pradesh but also across the country. Congress manifesto has tried to give clear signal how the party is planning to move in this direction. The party has promised waiving of farmers loan in 10 days, slashing electricity bill for them to half, waiving the bill for the COVID-19 pandemic period, and assured MSP of Rs400 per quintal on sugarcane and Rs2,500 per quintal on wheat and rice. Compensation in case of crop damage caused by stray animals has also been promised. Even cow dungs are promised to be procured at a rate of Rs 2 per kilogram by launching Godhan Nyay Yojna.

Caring for all sections of the population has become hallmark of the Congress manifesto. It has promised three free gas cylinders per year to each family and to increase honorarium to ASHA anganwadi workers and also pension to elderly widows. Promises to well-being of the women does not end here. It has promised 40 per cent reservation to women in government jobs. Women police personnels were promised posting in their home districts.

Congress also focuses on unemployed youths and quality jobs to all workers. The manifesto has promised to end outsourcing and regularize contractual employees in phased manner. The promises include Safai workers are to be regularized, honorariums to cooks, village heads, and chowkidars to be increased. The party has also promised to fill up 2 lakh vacancies of government teachers.

The most important for security of life is the promise of increase in health expenditure to 5 per cent of the state annual budget. Compensation of Rs 50 lakhs to corona warriors have been promised along with increase in pension to persons with disabilities.

Congress has also remembered to care for caste Hindus, and those who are being exploited by the BJP for their religious sentiments. The manifesto has promised to organize festival dedicated to Ganga in Prayagraj and Varanasi to attract religious Hindus, and public holiday on Parshuram Jayanti apparently to attract Brahmins.

All that entered in the Congress manifesto in written form have actually been remained in the party’s propaganda for over six months now, the reflection of which is clearly visible now in other parties election campaigns and manifestoes indicating political changes happening fast on the grassroots. (IPA Service)

Hijab Issue Is Being Used By BJP To Organise Anti-Muslim Polarisation
Posting....