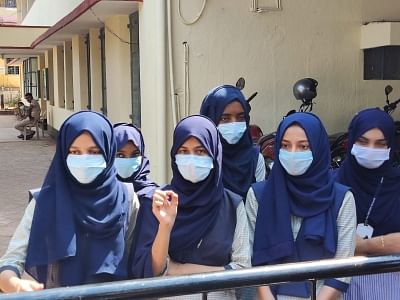 The hijab worn by Muslim girl students has been seized upon by the BJP and Hindutva forces to create another divisive and anti-Muslim polarisation in Karnataka.

The insistence of six girls on wearing hijab (head scarf) to class in the government pre-university college in Udupi was utilised by the Akhil Bharatiya Vidyarthi Parishad and Hindu Jagaran Vedika to get some Hindu students to wear saffron scarves and protest at the gate. This occurred on December 29 last year.  Subsequently, in two other colleges in Kundapur in the same district, Muslim girl students wearing hijab were barred entry to their colleges on the plea that some other students were demanding entry wearing saffron scarves.

The saffron-wearing students belonging to the ABVP and other Hindutva outfits shouting ‘Jai Shri Ram’ soon come into confrontation with hijab-wearing girls trying to gain entry into their colleges where they were earlier being allowed to wear hijabs. In the government pre-university colleges, where uniforms were prescribed, Muslim girls wore hijab of the same colour as their uniforms.  But all this changed after the saffron protests.

Visuals of Muslim girls with hijabs being barred from entering campuses, brought out starkly the gross injustice of preventing girls who aspire to study. With young men wearing saffron scarves mobilised by the Hindutva outfits confronting girls wearing hijabs trying to enter colleges, clashes erupted in various centres.  The Karnataka government ordered schools and colleges shut for three days as a result.

On February 5, the government education department issued an order prescribing uniforms in all government-run colleges and schools; private institutions were to adopt their own uniforms. The government order states that no clothes which disturb “equality, integrity and public order” should be worn.

Thus, the BJP government acquiesced in the demand of the Hindutva outfits that girls wearing hijab should not be allowed to attend government schools and colleges.

This is the latest move by the BJP state government against the minorities. In the name of not allowing any religious symbols in the dress of students, the right of Muslim girls to get an education is being denied.  The series of statements made by ministers, MPs and MLAs make it clear that Muslims are being targeted for their religious identity and will be treated as second class citizens and denied the equal rights provided under the constitution. This was brazenly expressed by Pratap Simha, MP from Mysore-Kodagu, who declared: “You can wear hijab, burka, … and go to a Madarassa”.

The hijab issue should not be seen in isolation from the overall context of what is happening in Karnataka. Since the BJP came back to power by toppling the Congress-JD(S) coalition government in 2019, it has gone about assiduously to impose the Hindutva agenda on the state. It adopted a stringent law against slaughter of all forms of cattle in 2020, which was basically aimed against the Muslim minority, many of whom are in the cattle trade and the selling of meat.  This was followed by the so-called Protection of Right to Freedom of Religion Bill 2021 which, in the name of fighting forcible conversion, is targeting the Christian community and interfaith marriages.  On the ground, vigilantes who attack social mixing of young men and women of different faiths have become more brazen and grown in the coastal districts.

It is a big irony that the very department which has ordered that hijabs cannot be worn in pre-university colleges is the very same department which called for a week-long performance of Surya namaskar to commemorate the 75th year of independence in colleges across the state.

The Karnataka government has acted against the fundamental right of Muslim girl students to an education.  If religious identity cannot be expressed in clothing in an educational institution, then would that mean that Sikh boys cannot be allowed to wear turbans to school? Wearing a hijab for a Muslim girl or a turban for a Sikh boy would constitute an essential religious practice.

Behind the move to deny hijab-wearing girls access to education is the effort in Karnataka to make Muslims second class citizens.  This is a matter of fundamental importance concerning the constitutional rights of a section of citizens. A case filed by one of the affected girl student is being heard by the Karnataka High Court. It will be decided by a larger bench of the High Court. As per the guarantees provided to minorities under the constitution, it is to be expected that this discriminatory order of the Karnataka government will be struck down. (IPA Service)

Congress Participation In BJP Led Govt In Meghalaya Is A Big Blow To Opposition Nationally
Posting....