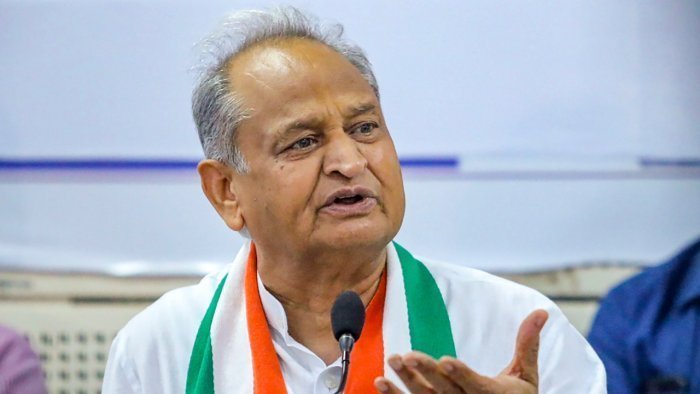 Rajasthan Chief Minister Ashok Gehlot has a lot of explaining to do after his “explosive” interview in which he called arch rival Sachin Pilot “traitor” six times and would have made it a dozen if the interviewer hadn’t cut short the interview. “What’s happened to you Mr. Gehlot” was not a question asked of the Chief Minister. “Why are you so insanely mad at Mr. Pilot?”

“When will they ever learn?” is a song made to order for Gehlot, and Rahul Gandhi, who while on his Bharat Jodo Yatra is allowing the exact opposite to happen when it comes to Congress leaders “jodo”. Rahul Gandhi, who is star-campaigner for Bharat Jodo Yatra, is too busy holding hands to be bothered with the undoing of the party at the hands of bickering Congress leaders, whether Pilot or magician.

Rahul Gandhi should put his foot down if his feet aren’t aching from too much walking on the hard blacktop. What got into Ashok Gehlot is not difficult to gauge. Being the consummate magician, Ashok Gehlot doesn’t want to go down the rabbit-hole in which the Congress High-Command, as opposed to the Congress President, takes a decision and Gehlot is left out in the cold to dry.

To sitting Chief Minister Ashok Gehlot, Sachin Pilot is a sitting upstart, and if Gehlot is calling the upstart a “gaddar”, he’s doing the Congress a favour. Of course, a “gaddar cannot be Chief Minister…The High Command cannot make Sachin Pilot the Chief Minister… a man who doesn’t have 10 MLAs. Who revolted. He betrayed the party, (he) is a traitor.”

If that isn’t the most succinct and at the same time the most descriptive definition of “gaddar”, also called “traitor”, there never was a Mir Jaffar or a Jaichand, nor for that matter a “Judas”. Also, there we have it, direct from the horse’s mouth. The complete “takedown” of not only Sachin Pilot, but also of Congress President Mallikarjun Kharge. Gehot said “The High Command” and not “Congress President”, meaning the Gandhi family has no business meddling, who is the High Command fooling?

Gehlot can’t get over the fact that Pilot had been quite ready to throw his “own government” under the bus, alluding to Pilot’s 2020 “revolt”. And, of course, Pilot must have BJP’s backing, and funding; by all accounts, there must be an Amit Shah hand.

Ashok Gehlot has called Sachin Pilot incompetent and traitor, words when spoken in Hindi take on a whole different colourful note — ‘nakaara’, ‘gaddar’ and ‘nikamma’. One must compliment Sachin Pilot for the immense patience he’s capable of displaying. Anybody else, and there would have been a major no-holds barred ‘dangal’.

Like Michelle Obama, Sachin Pilot chose to go high when Gehlot went low. “These allegations are completely unnecessary at a time when we need to put up a united fight against BJP… It is unbecoming for such a senior leader to say such things at a time like this,” Pilot reasoned with a statesman-like air.

But it is a fact that Pilot had threatened to walk out of the Congress with 19 other “gaddars”. That is not a figment of Gehlot’s imagination. Pilot so much wants to become Rajasthan Chief Minister that anybody standing 10 feet away would smell it.

Pilot practically reeks of CM, for which more than half the blame rests on the “High Command”, which cannot seem to come to a surgical decision. Allowing the duelling to continue is bad optics. One would have thought more intervention from Kharge, Sitaram Kesri had more spine.

It is a fact that Gehlot commands the loyalty of more MLAs than Sachin Pilot can fly in whatever plane he flies in his dreams. Sachin Pilot is not the ‘Papa Pilot’ who was the genuine article. No magician would have dared to play tricks on Rajesh Pilot or called him ‘nikamma’, ‘gaddar’ and ‘nakaara’. Rajesh Pilot would have taught magic to Ashok Gehlot.

The real story here is, by the time Rahul Gandhi’s ‘Bharat Jodo Yatra’ crosses into Rajasthan, there would be a full blown crisis in the Rajasthan unit of the Congress and then not Gehlot, not Pilot, but it will be Rahul Gandhi who will be tested. If this Gandhi cannot bring his own house in order, what’s he doing walking all over poor divided Bharat alias India? (IPA Service)

Sign Of Easing Of Global Recessionary Trend Is Good For India
Posting....