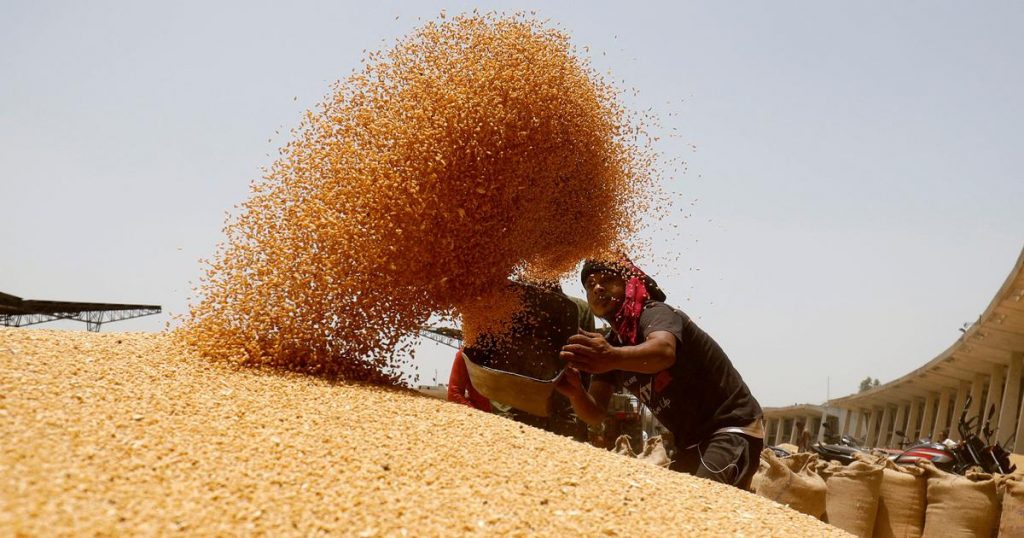 In 2020, the present NDA government, while bringing three farm laws said they are intended to facilitate fair markets and enhance farmers’ incomes. But the government acted exactly in the opposite by banning exports all of a sudden, when the global wheat prices are attractive and watered down the hopes of Indian wheat farmers.

In the context of Russia-Ukraine conflict — both the nations account for nearly 25 per cent of global wheat trade —world wheat prices skyrocketed to 450dollars a ton from 160 dollars a ton in 2018. In 2021-22 India harvested a record 31.51 crore tons of food grains. After the recent Rabi harvesting, wheat production stands at 10.6 crore tons (106.41 million metric tons), with only a shortfall of 3.18 MMT from the previous year, caused by recent severe heat wave in March. Besides, as on early April, the FCI godowns were overflowing with1.9 crore tons of wheat against a buffer stock of 7.4 MMT and rice of 13.5 MMTs.

Attracted by high world market prices, the Union ministry of commerce was hoping to earn a windfall of earning10 billion dollars by exporting 15 to 20 million tons. Even our Prime Minister Narendra Modi had gloated in early May during his Europe tour that India can export wheat and even feed the world in such hard days. Then came a sudden ban on wheat exports from the government of India itself, just within 10 days after our Vishwaguru had boasted of feeding the world. This move did upset many importing developing nations, which are in dire need and forcing G-7 to criticise the stand vehemently along with other world bodies.

The ban has also attracted the wrath of North Indian farmers who are deprived of reasonable incomes at a time when the prices are attractive both in domestic and world markets. As against the government-announced minimum support price of Rs 2,050 per quintal, the prices increased by 25 per cent in the open market and they could sell to grain traders at a maximum price of Rs 2,400 a ton. The ban also sent shock waves to exporters, as thousands of wheat trucks came to a halt in Kandla and other ports. Realising chaos at ports and confusion overcommitted export orders, the government of India three days after the ban, allowed export of wheat as an interim arrangement to complete the committed shipments orders. With only 4.5 MMT of wheat exported till May 13, when the ban was announced against the ambitious target of 15 MMTs, serious damage was done to our credibility as a reliable player in the world markets.

The FCI had set its target for this year as 44 million tons. By the third week of May, that at the very end of the season, it could procure only 19.5 million tons against last year’s procurement of 43.44 million tons. With an attractive higher price of Rs 2,400 in open markets, farmers naturally did opt out of the FCI procurement with a price of mere Rs 2,050 a quintal. It is striking that by May 10, the FCI has procured just 5.51 per cent of all wheat procured by official agencies. The low procurement will seriously affect the maintenance of stocks to support the much needed public distribution system (PDS) to poor. In fact, FCI’s share of procurement has been declining ever since Modi came to office in 2014. This is the lowest ever level for the FCI’s wheat procurement operations.

FAO has just declared that available global wheat stocks would only be sufficient for next two months and expressed fears that serious food shortages would be there especially in grain importing developing countries. By the day export ban was announced, private traders have already mopped up a larger share of available grain in markets and horded the same in large volumes. Expecting big surge of prices in domestic and global markets, they are waiting for an opportunity.

At the same time, FCI was unable to meet its procurement targets, resulting in the reduction of PDS commitments, ultimately hitting the poor badly. The present Modi government has brought anti-farmer and anti-people farm laws by lifting food hoarding limits under Essential Commodities Act to benefit private traders, super market supply chain and exporters. Already Reliance and Adanis have built silos in Ludhiana and Haryana with capacity to hoard millions of tons of foodgrains including vegetable oils. Another farm law deliberately encouraged trade outside APMC mandis in the name of free markets to allow private corporate grain traders to dictate prices to farmers. As a result, the FCI procurement for PDS plummeted. The present and past regimes are bent upon bringing incomplete privatisation of food production, markets and distribution and finally hand over it to large corporations and foreign multinationals.

Today marketing and prices of wheat flour, dal and vegetable oils is controlled by a few corporations such as Adani, ITC and Reliance. Globally grain and vegetable trade is controlled by four MNCs— ADM, Bunge, Cargill and (Louis) Dreyfus, which account for between 75 per cent and 90 per cent of the global grain trade, according to estimates in Guardian of the UK.

The ulterior motive of the Union government behind imposing export ban appears to wait for high prices in world market and then lift the ban so as to benefit domestic grain traders and exporters, who have already acquired and hoarded huge volumes of grain. The Union government is procuring grain from farmers by not even paying the cost of production. The cheaply procured grain is used by the present regime to supply free ration at the time of state elections to win the elections. This clearly demonstrates the level of hunger prevailing in the country. Food grains should be procured at prices profitable to farmers to ensure sufficient food stocks for providing rations at affordable prices under the PDS to poor.

The special programmes like the PM Garib Kalyan Anna Yojana and special schemes for migrant workers as well as Covid relief packages accounted for more than 30 per cent of all allocations in 2020-21 and 37 per cent in 2021-22. There is a worry that the shortfall in wheat production and procurement may be used as an excuse to limit the continuation of those expanded support programmes.

The Union government should immediately announce a bonus of least Rs 500 per quintal. Subsequently the MSP on wheat per quintal should be hiked to Rs 2,800. This would not only compensate farmers for the crop losses they had suffered but also for the escalating cost of inputs, most significantly, fertilisers. The actions would benefit our farmers from sharing export benefits and ensure sufficient grain stocks for PDS to provide food security to poor in the country.

The decision to export wheat world appear to be logical for a government that was committed to allowing an unfettered role for private trade in agricultural markets, illustrated by its stubborn pursuit of the three controversial farm laws, which it was forced to withdraw in the face of unprecedented opposition from the Indian peasantry. Also, the situation offered a rare opportunity to Indian farmers, after years of low output prices, to increase their incomes following the surge in prices. However, what is inexplicable is the Modi government’s utter unwillingness to pay a higher price in order to ensure food security. (IPA Service)

Wage Earners And Bottom 20 Per Cent Are The Hardest Hit By High Inflation
Posting....