Bulldozer Is The New Power Symbol In India Of Narendra Modi 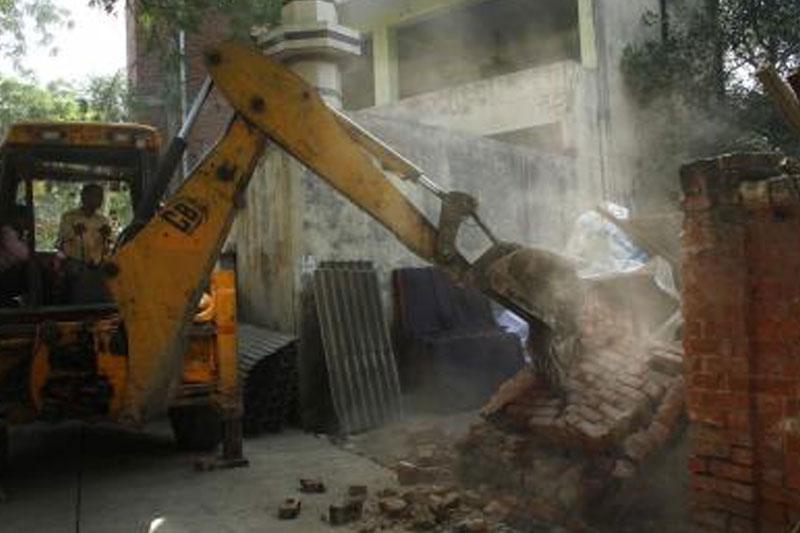 In the New India of RSS and Narendra Modi it is the lathi and not the rule of law that defines and underlines the character of India. Though the RSS and BJP leaders are not tired of claiming that India has not deviated from its traditional path and continues to be a democratic country, the fact remains it is the word of the king that matters most.  In New India constitution and democracy have lost their relevance and utility.

The best example has been the Yogi Adityanath’s governance in Uttar Pradesh.  For him constitution is merely a book containing some articles. What is worse the prime minister of India, Narendra Modi refers to maintain a studied silence on his trampling of the law of land and constitution. It is known that Modi did not ever pull up or chided Yogi for his misdemeanour. Modi’s silence is pervasive and loud. He by maintaining a passive attitude simply endorses Yogi’s actions.

In a civilised, constitutionally government with a vibrant democratic functioning, a government is not supposed to resort any kind of unconstitutional action. These measures are pursued by the autocrat rulers and kings. Strange enough the Indian history is replete with instances where even the rulers and maharajas did not resort to such nasty highhandedness. Incidentally, even after 47 years of the emergency rule, Indira Gandhi is decried and hated for resorting to some domineering actions.

Ironically the RSS and BJP which systematically insinuate and do not any opportunity to disparage her, have turned a blind eye to his actions. In fact using bulldozer to smash and shatter the residential houses by Yogi against his personal enemies has now assumed pride of place in the Indian political lexicon. It is a sad commentary that RSS and BJP have been projecting the use of bulldozer to finish political rivals as an innovative idea to promote its hate politics, imbedded in the innocuous framework of good and effective governance.

Use of the bulldozer also underlines government’s utter lack of confidence and trust in the laws and statues enacted by it. This is the shameful development. A government preaching its people to abide by the law of the land, but not adhering to these norms, is indeed the most shameless act. If an ordinary citizen violets the law of land and goes against the rules, he is instantly penalised by the police, even sent to the jail and described as anti-national and criminal, but a chief minister who indulges in such is eulogised and projected as visionary.  What a paradox indeed.

The politics of bulldozer is also a challenge to the higher judicial system. The government has bulldozed the judiciary.  If the government and the political system have any respect for the higher judiciary it must not have acted in this manner.  Under our rules the police has to investigate the crime of any person. If proved the police can proceed legally. The most important aspect id the law does not grant right to police to demolish the house of an alleged breaker of law. The Supreme Court and higher judiciary should have suo motu action.   The government intends to send the message that the courts cannot do anything to it. They are much above the judiciary.   The SC and HC should have come to preserve the fundamental rights of the people

The house which the police demolished in Allahabad is owned by his wife and is not the property owned by Javed. Fatima is a secretary of the Jamaat-backed students group Fraternity Movement. The Muslim community also nurses the feeling that since home minister Amit Shah is preparing the ground for implementation CAA such actions are being taken to terrorise the Muslims residing in India and force them to refrain from resorting to any protest.  Worth mentioning that police has been curbing protest at the designated zones such as Jantar Mantar.

Undoubtedly credit for bringing a heavy-duty bulldozer into the political use and limelight goes to Yogi Adityanath. He entrusted the bulldozers with the onerous task of upholding the rule of law. Significantly an insight into the targets for demolition would reveal that Muslim community was the prime target of the government. Due to its ‘success’ in demolishing the homes and hopes of the Muslims in UP, the bulldozers have been effectively used on the plea of upholding the rule of law by serving the so-called guilty with the harshest punishment. It has been used in Khargone in Madhya Pradesh and in Jahangirpuri in Delhi after the communal riots.

Ironically the rulers in their zealousness to punish their rivals often ignore the directive of the Supreme Court. Demolitions in Jahangirpuri didn’t stop even after the apex court issued a stay order on demolition. It speaks loud of the intentions of the governments.

The fact of the matter is the prestige and respect which once the bureaucrats enjoyed is missing in the eyes of the common Indian. People look at them with disdain. This is certainly not good for the services and its members. Look at the way the former director of the  Enforcement Directorate joined the BJP and also contested assembly elections from UP.  He has reopened the National Herald case. Obviously his action raises doubt reopening of the case. He had done it only for appeasing his political masters and harassing the Gandhis. Through his action he has simply lowered the prestige of the rank and services.

In fact bulldozers have emerged as a new source of hate in today’s politics, and how it was used in the past. A bureaucrat never questions the administration implication and rational of its use. Senior Congress leader Shashi Tharoor has criticised Yogi and his government for ‘exempting itself from the Indian constitution,’ a day after the state chief minister said that bulldozers will continue to crush ‘criminals and mafias’ in the state. Obviously Yogi made it known to the world that he has no faith in the constitution and rule of law.

Recently, the house of Afreen Fatima was bulldozed after the arrest of her father Javed Mohammad, an activist of the Jamaat-e-Islami Hind-backed Welfare Party of India, for his alleged involvement in protests against the derogatory remarks on Prophet Mohammed by two now-suspended BJP spokespersons. The police allege that she had suggested her father on how to organise protests. It is irony that UP police for justifying its action has been describing Javed as the mastermind. Of late it has become a fashion for the police to describe any important Muslim person as mastermind of the incident, only with the motto to justify its action. The UP has earned notoriety for its actions. It has been behaving in a reckless manner. It has detained on the charge of being the “mastermind” of the violence which broke out during a protest over controversial remarks on Prophet Muhammad in Prayagraj on June 10.

In protest against this action of the police students of JNU, University of Hyderabad, Jamia Millia Islamia and other universities came out on the streets and held demonstrations on Monday. Several students gathered at Uttar Pradesh Bhavan and Jantar Mantar Road were detained. While the UP police has arrested Javed alleging that he was the mastermind, the SSP of Prayagraj said; “there could be more masterminds…The anti-social elements used minor kids to hurl stones at the police and administration. A case registered under 29 crucial sections. Action will be taken under Gangster Act and the NSA”. He has come out with ridiculous claim. It implied that wanted to implicate many persons as being the mastermind.  The UP police also it ends to arrest Afreen as the SSP claimed; “Javed’s daughter who is a student in Delhi is also involved in such activities… If needed, we will contact Delhi Police and send our teams.”

Former JNUSU president Aishe Ghosh said, “The series of demolitions of houses of suspected protesters in BJP-ruled states like Karnataka, Madhya Pradesh, Gujarat and UP is a blatant act of taking law into their own hands. The BJP government has exposed its unconstitutional and anti-Indian politics of hate.” Indeed an irony that bulldozer – usually seen as a tool of destruction and upheaval – has become a symbol of good governance.  (IPA Service)

French Left Has A Big Opportunity To Defeat Ruling Party In Run-Off On June 19
Posting....