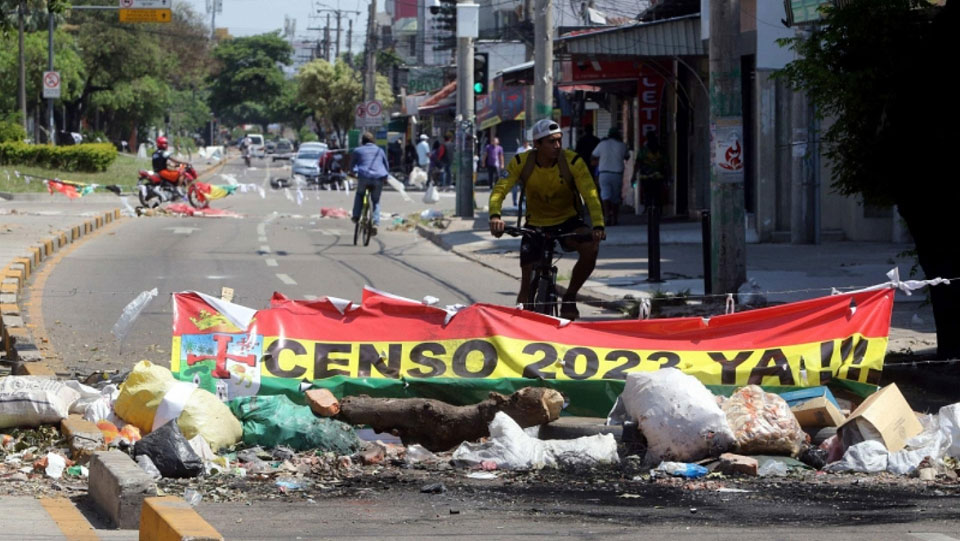 With the exception of a coup-government interregnum in 2019-2021, the Movement Toward Socialism political party (MAS) has headed Bolivia’s government since the beginning of Evo Morales’s presidency in 2006.

The MAS government now led by President Luis Arce and Vice President David Choquehuanca announced on July 12 that its every-ten-year Population and Housing Census would be moved from November 16, 2022, to sometime in 2024.

Spokespersons attributed the change to difficulties left over from the pandemic, a need for translations into indigenous languages, uncertain financial resources, and extra time required for “technical” changes.

Leaders of the Santa Cruz department in Bolivia’s eastern lowlands, the nation’s largest, immediately demanded a census in 2023, not in 2024. Department governor Luis Camacho and Rómulo Calvo, president of the Santa Cruz Civic Committee, warned that without a settlement on the census, they would initiate a strike aimed at undoing the department’s economy, and thereby the national economy.

In response, “over one million Bolivians mobilized” on August 25 in support of the government and against a regional leadership group that is the vanguard of opposition to Bolivia’s socialist and indigenous-led government. Even so, the strike began on October 22. Recent Bolivian history suggests another coup may be in the offing.

The national census in 2012 fuelled controversy when it showed that many indigenous people identify themselves as mestizo and not as belonging to a particular indigenous nation. That was encouraging to the reactionary and racist Santa Cruz leaders, who have no enthusiasm for increased indigenous representation in the national legislative assembly.

The Arce government, by contrast, objects to an undercount of indigenous people and especially in the eastern lowland departments, where their numbers are increasing.

The category of mestizo did not appear in the census of 2012 and is not part of the census in dispute now. The Santa Cruz leaders are insisting that that mestizo identity be incorporated into the census. Expert advice was sought in 2012 and the Arce government is now proposing the same.

The peculiarities of Santa Cruz are central to this story. For one thing, Bolivia’s four easternmost departments, particularly Santa Cruz, produce most of Bolivia’s wealth. Santa Cruz is home to industrial-scale agricultural operations and to facilities for oil and natural gas production. This lowland region accounts for most of Bolivia’s export income.

The realities are these: Santa Cruz alone accounts for 76% of the country’s food production, for all of its sorghum and sunflower oil production, 99% of its soy products, 92% of its sugar cane, 75% of its wheat, 72% of its rice, and 66% of its corn. In 2021, farmers owned 4.6 million head of cattle, over a million pigs, and 130 million chickens.

Also relevant to the strike story is the reactionary and racist nature of opposition leaders in Santa Cruz. They are utilizing the department’s “Civic Committee” to organize the strike and the Union of Santa Cruz Youth to carry out violent, paramilitary-style street actions. Gov. Luis Camacho formerly headed the Santa Cruz Civic Committee.

The civic committees of all departments originated decades ago in response to national-regional tensions. Members of formerly eastern European families, some of them big landowners, belong to the Santa Cruz civic committee. Many brought fascist ideology with them when they immigrated to Bolivia after World War II.

At the last of three big gatherings in Santa Cruz, Camacho on Sept. 30 announced the start on October 22 of an anti-government strike of “indefinite” duration. In operation, the strike has led to barriers being placed across major highways to impede exports and in-country deliveries of commodities, mainly food. Strike leaders have forced key factories and commercial centres to shut down.

The Youth Union and other thugs have carried out anti-government demonstrations and fought in the streets against MAS party supporters and the national police. There have been injuries, human rights violations, and one death. The strike has had little impact in the other eastern departments.

With a presence at border crossings, the strikers have sharply reduced the transit of exported goods. Government authorities on Oct. 27, anticipating domestic food shortages, banned all exports from Santa Cruz of soy products, beef, sugar, and vegetable oil.

The government and MAS activists organized a rally and march by hundreds of thousands of people before the strike began, and another on the day after. In La Paz on Oct. 26, confrontation between government supporters and an opposition march left 20 persons wounded.

The government on October 25 held a “Pluri-national Encuentro for a Census with Consensus.” Officials from throughout the country attended. A proposal emerged that would enable a technical commission to determine a date for the national census.

Camacho rejected it, but opposition leaders Rómulo Calvo and Vicente Cuellar accepted the proposal. In an interview, Camacho asserted that federalism remains the only solution to the “fissure” present since the “founding of the Republic.”

On November 1, President Arce, referring to threats to “national integrity,” called upon military leaders “to guarantee and defend the independence, unity, and integrity of our territory.” A presidential spokesperson indicated that Arce favoured new negotiations with no established date for the census and without conditions.

Events in Santa Cruz align with a grim history. President Evo Morales’s accession to power in 2006 was a culmination of old indigenous resistance against European colonialists and of recent pushback against neoliberal assaults inflicted by local enablers of U.S. and European ruling-class objectives.

Social gains achieved by the MAS-led government and its program of modest wealth distribution seemed to cement its place in history and certainly inflamed the animosities of reactionaries in Santa Cruz and nationally.

As a new constitution was being shaped—it was approved in 2009—Santa Cruz and its neighbouring eastern departments staged a separatist revolt fuelled by racism. A failed assassination plot against Morales in 2008 was part of it. During this period, the Morales government expelled a U.S. ambassador and the U.S. Drug Enforcement Agency.

The current MAS-led government came into existence in 2020 following the first-round electoral victory of Arce and Choquehuanca. Its approval rating currently is 51%. The present strike has set back governmental efforts to restore a national economy devastated by the coup government’s neoliberal reforms and by pandemic effects.

Arce, reporting to the Legislative Assembly on November 8, indicated that “We have complete certainty that our people are fully behind us and that they recognize a national patriotic government that looks out for the national welfare, which stands above sectarian and regional interests.” He observed that “in times of crisis, it’s always the poor that end up losing more, or losing everything.” (IPA Service)

Italy’s Far-Right Government Is Already At War With Migrants
Posting....