Italy’s Far-Right Government Is Already At War With Migrants 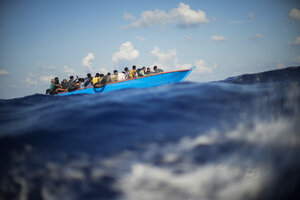 Threats, lies, and the breaking of international conventions. Another Italian government, another round of attempts to turn the ports of Italy into a circus of violations and dehumanizing logistical wranglings. Another round of bolstering Europe’s racist border regime — as if the sea were barbed wire and every boat a checkpoint.

Immigration has been the bugbear of Italian politics for over a decade. The boats of desperate souls have never left the front pages for long — whether rightfully (in recognition of the vast resistance mounted by the African and Asian proletariat to an unjust, divisive border regime), or in error (a spectacularized distraction from the siege launched by the Italian ruling class against society as a whole).

This story has continued with the new government formed in October, a right-wing coalition including the misogynist media mogul Silvio Berlusconi; the Trumpist, Putin-supporting Matteo Salvini; and, in the leading role, Prime Minister Giorgia Meloni and her “post-fascist” Fratellid’ Italia party. It was no surprise that after taking office three weeks ago, this coalition immediately took aim at the NGOs operating rescue missions in the Mediterranean Sea.

There has been no official search and rescue mission organized by either Italy or Europe since 2014; the majority of migrants arriving by sea either do so without assistance, or are intercepted by often dangerously inexpert military or commercial vessels. Yet many are rescued at sea by ships launched by NGOs. Of the eighty-five thousand people who have survived the crossing to Italy this year alone, around one-fifth were rescued by activists. Half a century of maritime law and international conventions establishes the limits and duties within which the rescues take place: anyone rescued at sea must be taken to the nearest port of safety; anyone arriving in port has the right to claim asylum.

Despite the clarity and simplicity of these laws, successive Italian governments have attempted to sidestep them, infringing upon the human rights of those arriving along the peninsula’s coastline. It happened in 2009 when hundreds of East African refugees were ferried to Libya by the Italian military under Berlusconi’s watch. It happened in a torturous 2016, when the government, led by Italy’s Democratic Party, wiretapped rescue ships, sent secret service agents on board, and initiated criminal proceedings. It happened in 2018 when then interior minister Salvini detained hundreds of migrants on board Italian Coast Guard ships and NGO vessels alike. It happened in 2021 when ships were confiscated and activists’ homes raided shortly after the inauguration of Mario Draghi’s technocratic government. (For the first of these cases, Italy was sentenced by the European Court of Human Rights; for the second, the rescue crews are currently in court; for the third, Salvini himself is in the dock). And these are but a few exemplary episodes.

The new government formed while four NGO rescue ships were still at sea — and immediately declared that they would not be allowed to disembark anyone in Italian ports. It claimed that the migrants should be sent to other countries according to where the rescue ships are officially registered, in this case Germany and Norway. The claim makes for good nationalist propaganda but has no basis in international conventions. Nevertheless, with more than one thousand people on board, the four ships were left waiting for a place of safety to be assigned: the aptly named Humanity 1, the Geo Barents, the Rise Above and the Ocean Viking.

When the Humanity 1 eventually came into port at Catania, on the eastern coast of Sicily — soon followed by the Geo Barents — the Italian government changed tack, announcing that only those meeting the correct criteria would be allowed to touch dry land. Implementing a novel tactic which surprised even those familiar with the innovative cruelty of Italian migration policy, the new interior minister, Matteo Piantedosi, decided to send a medical team on board to select those who would be allowed off, and who would remain. To reiterate: to select who, among the 150 people who had survived the torture and horrors of the Libyan concentration camps and the perils of the sea crossing, might be deemed worthy of acceptance Italy, and who instead would be forced to remain on board and potentially sent back into international waters.

In this recent diplomatic war of words, the importance of “European solidarity” has been repurposed on all sides. “The other countries are isolating us,” wails the Italian interior minister, “they are not acting in the spirit of European solidarity.” “We must follow the rules,” retorts the German government, “we have a mechanism for solidarity.” “Yes, we can take some of them,” indicate the French, “but we would like Italy to remember that they are the primary beneficiaries of European solidarity” — in terms of economic redistribution among member states, they knowingly imply. The only remnant of the previous centrist hegemony, President Sergio Mattarella, attempted to calm the waters: “this is a challenge that can only be overcome through European solidarity.” And finally, Meloni found an ally in the form of Manfred Weber, head of the European People’s Party (EPP), the main centre-right group in the European Union parliament. He too commented that “Italy can’t be left do go it alone, we need to show solidarity on a European level.”

For the time being, it seems that the government has faced an embarrassing failure. Diplomatic incompetence, lawmakers with the wrong footnotes, outraged professionals — this is not the road to economic or political stability. Those in charge lack both the experience to govern, and the radicality to excuse their naivety. Furthermore, despite being only weeks into their legislature, this is not the first occasion on which they have demonstrated a certain juridical clumsiness, having already published a decree against “raves” and tabling an antiabortion law that both contain patently unconstitutional elements.

This distinguishes the new government sharply from its predecessors. While certainly removing some of the worst (and more unconstitutional) excesses of Salvini’s previous brief period in power, Draghi’s technocratic, cross-party government was disastrous for democracy, and an ally to businesses, not workers. But it was viewed as competent, a “safe pair of hands.” In terms of managing the twin crises of the pandemic (for which Draghi was installed) and the war in Ukraine, not even technocratic competency was enough. If the new government continues the level of technical failure it has demonstrated thus far, it may well lose ruling-class support. Indeed, cracks are already beginning to show, as Berlusconi and members of his party have begun to criticize the interior minister’s approach.

But perhaps the Italian government is less blundering than it might seem. If last year, for Draghi and the European political class, “European solidarity” meant redistributing wealth away from the North and down to the South — Italy included — today it means uniting with Ukraine against Russian military invasion. Draghi and his government were fully behind this project; the new government is looking toward other alliances. The last time a right-wing party dominated the government, in 2018, it soon found out there was little to play for on the European level: an attempt to install a sovereigntist economy minister was soon vetoed by President Mattarella.

But 2022 is not 2018. War and disease have transformed our world. And in this new political remaking of Europe, the racist attacks on the African and Asian working class arriving in Europe by sea may well be paramount. While European states argue over the meaning of their solidarity, internationalists must fight against the right-wing political forces trying to take hold of Europe, while remaining steadfast in our solidarity across all borders. (IPA Service)

Remembering Ela Bhatt Who Battled For The Unorganised Till Her End
Posting....