BJP’s March To Nabanna, Official HQ Of Mamata Has Failed To Make Impact 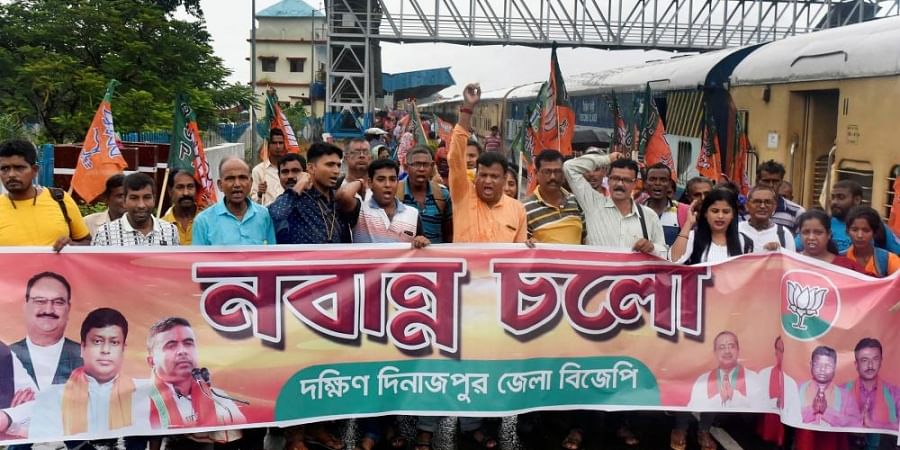 Bengal BJP’s March to Nabanna, the headquarters of Bengal Government on September 13 against ‘TMC Corruption’ was a desperate exercise to project Mamata Banerjee as the most corrupt leader in the country, it also implicitly aims to counter ‘pro-separatist’ and anti-minority image and identify itself particularly with the Muslim villagers of rural Bengal. However, though the participation was impressive, the march failed to make additional impact in favour of BJP in  the  state.

Ever since BJP emerged as a major political force in Bengal known for its leftist orientation and cultural trait, it has not dared to organise such a massive gathering. Undauntedly this was one of the biggest political campaigns planned by BJP since its defeat in the 2021 assembly polls.

For Sunil Bansa,l the national observer of the party in the state, this is the biggest day as he has succeeded in injecting the sense of purpose in the rank and file and motivate the leaders to take Mamata head on. This is the first sign of his accomplishing the mission which has been assigned to him by his mentor Amit Shah.

A majority of the senior TMC leaders have been facing the charges of corruption. The memories of their involvement in Sarada and Narada scams still haunt the common people. But the state leaders having a divided loyalty were unable to build a popular movement against Mamata. It was after Bansal taking the charge that efforts were made to reach the message to the rural people that Mamata was patronising the corrupt leaders.

In preparation for the Nabanna Abhijan (March to Nabanna), all senior leaders of the BJP state unit have conducted meetings in every district. Senior leaders have travelled across the state since September 1 to prepare the grounds, say party insiders.

Though the BJP leaders held preparatory meetings in the urban areas of the state, their main focus was in the rural belt, primary with aims to alienate the committed TMC voters from Mamata. This underscores a major shift in the organisational strategy of the party. The leadership nursed the strong feeling that the urban supporters, who mainly came from the migrant OBCs from states of Bihar and Uttar Pradesh, could not be relied to a major extent. They have joined the BJP for fulfilling their economic and social interest. In recent days, some amount of vacillation was also witnessed in this section.

If the party intends to become really powerful organisation, it should have to win over the trust of the rural people, particularly the Muslims who have got a major numerical presence in rural areas. The move is also a step forward in the direction of defeating the TMC at the Panchayat election which would be held in 2023. In fact some top party leaders including a bunch of national leaders are busy drawing up plans for 2023 panchayat polls.

Though they have been striving hard, they concede more efforts have to be put in as they have a formidable opponent in Mamata. She has already salvaged the situation in north Bengal where BJP had succeeded in building its base to some extent. The BJP also plans to hold such a rally in north Bengal. BJP will focus on north Bengal over the next few months, starting from Monday led by Bengal party president Sukanta Majumdar as “damage control” after several of its elected representatives publicly supported the demand for a separate Cooch Behar state. Their shift in stand has damaged the poll prospect of the party in north Bengal. Out of eight MP seats and 54 MLA seats, the BJP has seven MPs and 30 MLA seats in this region.

A number of organisations like that of Rajbanshis have been demanding separate state of Cooch Behar for years. There is also a demand for Gorkhaland. For the past 13 years, the BJP has been trying to provoke sentiments of people about these statehood demands to win polls. But unfortunately for them the central leadership did not endorse their stand. The central leadership holds that raising these (separate state) demands has already caused irreparable damage to the party as there is a strong sentiment among people in the state against such demands.

It is worth recalling that J.P. Nadda, national president of the BJP only in June this year had explicitly said that no state leaders and legislators should speak on statehood. This issue had also featured at the party’s training session in Calcutta.

Mamata and her party TMC from the beginning has been opposed to creation of separate districts. Sources maintain that a substantial number of the BJP members who are opposed to this demand may prefer to join hands with Mamata. Already some of the TMC leaders who are presently with BJP had held a closed door meeting in Siliguri and decided to extend support to Mamata.

A senior state leader made it clear that only issue of corruption and Mamata patronising the corrupt TMC leaders will catch the imagination of the people and this will help the party in panchayat election. He holds “If we want to put up a decent fight in the panchayat polls, we will have to change the perception that has been created by the open endorsement of a separate north Bengal state.”

The participation of a huge number of BJP workers and supporters from the rural Bengal is indicative of the fact that Mamata Banerjee’s rhetoric to abolish corruption and having zero tolerance towards corruption does not have much impact on the rural poor who are the worst sufferers of the corruption. Her outburst against ED and the CBI also failed to convince them of her sincerity. Already a PIL has been filed at Calcutta High Court seeking a probe into the assets of the CM’s brothers Kartik and Babun, and sister-in-law Kajari.

Abhishek Banerjee, nephew of Mamata and number two leader in the party has described Amit Shah as the India’s biggest Pappu’. Some days back TMC leaders and workers took out a rally in Hooghly’s Uttarpara against the BJP with placards and posters which had Amit Shah’s picture and a caption that read: “INDIA’s BIGGEST PAPPU.”

In a major image building exercise and wash away the stigma of TMC being the house of corrupt leaders, Mamata has decided not to give tickets to ‘tainted’ leaders in Bengal rural polls. The party has carried several surveys and a comprehensive report has been prepared. Sources say the process of weeding out rotten elements is underway. “The rectification drive will recommence during ticket distribution for panchayat polls. More than 50-60 per cent of the elected representatives might be dropped,” said the TMC MP Sougata Roy. Mamata is presently touring the south Bengal districts and is meeting TMC workers. The Trinamool supremo is determined to see that the BJP’s strength is reduced further in the coming panchayat elections early next year. (IPA Service)

Narendra Modi Should Strive For A Better Understanding With Xi And Putin At SCO Meet
Posting....