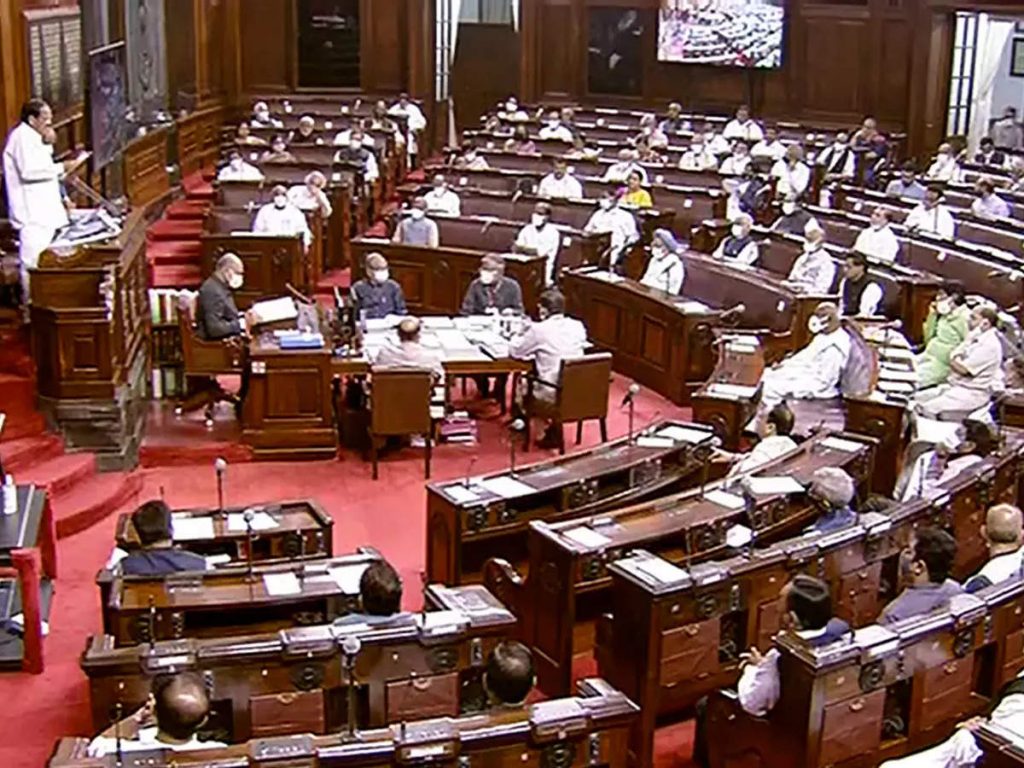 After the saffron party’s recent victory in the assembly polls, particularly in the northeastern state of Manipur, it was expected that there would be a positive impact in favour of the Bharatiya Janata Party in the northeast, which financially depends mostly on the Centre. The return of the saffron party in the state of Manipur with a majority of its own shows that it is no longer an outsider in the region. The saffron party also won 7 seats in the Christian dominated hill region of the state. It had won 5 in this region in the 2017 state assembly polls. After its success in Manipur, the saffron party has set its target for the upcoming Rajya Sabha polls in the region.

There are four seats for the upcoming Rajya Sabha polls to be held on March 31 from the region — 2 from Assam and 1 each from Tripura and Nagaland. Already, the BJP has won the seat unopposed from Nagaland — and the party’s state women wing chief S. Phangnon Konyak became the first woman representative from the state to the upper house. That itself is a milestone in the history of the northeastern state, which is yet to elect any woman representative to the legislative assembly. Also important is that Konyak is the first saffron parliamentarian from the state. The party has 12 MLAs in the state assembly and it is an ally of Neiphiu Rio led Nationalist Democratic People’s Party. Party leader Yanthungo Patton is the deputy chief minister of the present government, where the main opposition Nagaland People’s Front too is a partner.

Clearly, the BJP is playing the woman card in Nagaland. Nationally, the saffron party has reaped benefits by focusing on the woman vote bank, as evident in the recent assembly polls, including Uttar Pradesh. After the unfortunate and horrific mistake of killings of seven mineworkers by the security forces in Mon district last year, followed by subsequent violence that took more eight lives, including a security personnel, the saffron party has been on backfoot in the state. Mon district is inhabited by the Konyak Naga tribe — and the saffron party’s decision to send a Konyak to the Rajya Sabha shows that the party is trying to lessen the anger, although that’s a hilly task.

In Assam, the BJP led National Democratic Alliance has the numbers to win a seat. The saffron alliance, however, is keen to win the other seat too. Pabitra Margerita is the BJP’s candidate for the first seat while the other seat is allocated by the saffron party to its ally United People’s Party Liberal, which has nominated its working president Rwangwa Narzary. The main opposition Congress has also nominated one candidate — Ripun Bora, the former state party president.

This has made the contest for the upper house interesting in the state. A candidate will need 43 first preference votes to win a seat. The Congress, supported by 15 MLAs of All India United Democratic Front, claims that it has the backing of 44 MLAs — including the support of one MLA each of Communist Party of India (Marxist) and Raijor Dal. The saffron party, however, is confident to win both the seats. Although officially the grand old party has 27 MLAs, two of them — Sashikanta Das and Shermin Ali Ahmed — are suspended by the party. Already chief minister Himanta Biswa Sarma has reached out to Das and has even claimed that there are “Congress MLAs who are likely to vote for the NDA in the Rajya Sabha polls”. The grand old party faces the challenge to win a seat and if it fails to do so, it is likely to deal a blow to the already beleaguered Congress in the northeastern state.

Coming to Tripura, the BJP is expected to send state party president Manik Saha as the first saffron representative to the Rajya Sabha from the state, although there will be voting on March 31. The main opposition CPI(M) has nominated former minister Bhanulal Saha for the seat, despite knowing that the party doesn’t have the required numbers. Still the election will be interesting to watch. Officially BJP has 33 MLAs while its ally Indigenous Peoples Front of Tripura of NC Debbarma has 8.

The CPI(M) has 15 MLAs and there are presently 4 seats vacant in the assembly. Two of the BJP MLAs — Burba Mohan Tripura and Diba Chandra Hrangkhawl — belong to the Sudip Roy Barman camp. Sudip along with Ashish Saha had joined Congress this year. IPFT(NC) actually has 7 MLAs as its MLA Brishaketu Debbarma joined the Pradyot Debbarman’s TIPRA Motha but the speaker hasn’t disqualified the former. Whether two rebel BJP MLAs and one Motha MLA will vote for BJP or CPI(M) candidate, this is what the people of the state are eager to know.

There has been dissent against Manik Saha as a section of party leaders, including some ministers of Biplab Deb government, are unhappy with his role as the party president. There have been allegations that Manik, who has no experience in politics before joining the saffron party in 2016, hasn’t been able to build the organisation in the state, the way the party had expected. The saffron party’s organisation still remains weak in the hill areas, which have influences in 35-36 seats in the state. He is believed to be very close to chief minister Biplab Deb. Whether Manik’s Rajya Sabha selection is an indicator for an upcoming change of party president ahead of the state assembly polls early next year to strengthen the party isn’t known as of now, although some reports say that the party is unlikely to change the face of the president in the state. (IPA Service)