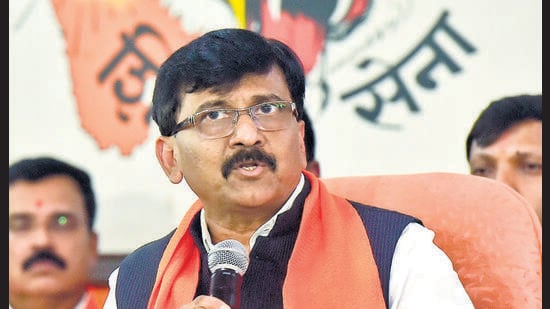 There is talk of the “fear” on Uddhav Thackeray’s face. And that if anybody started the ‘sliving’, it was the Sena’s partner Nationalist Congress Party. ‘Sliving’ is slang for somebody “slaying” as well as “living it high.” Using the analogy, the BJP-Shiv Sena ‘sliving’ has reached a crossroads. The BJP has lost patience and so, it seems, has the Shiv Sena.

Thackeray’s latest reaction to BJP’s arm-twisting tactics was textbook Corleone. Targeting family members is worse than breaking ‘omerta’. “You want me, let’s get face to face,” Uddhav Thackeray said, “Leave the family out of it.” Thackeray’s defiant words hit target. The comparison is now which of the two is the better street-fighter?

It is this alliance glue which the BJP wants unstuck. And, as part of strategy, the Modi Government has been targeting the weakest links in the MVA, those most vulnerable to corruption. Let’s not forget, the BJP has ruled Maharashtra and knows which party’s skeletons are buried where.

The BJP and the Modi Government are now reconciled to Thackeray in the opposite camp. Why waste time and energy trying to wean away somebody newly hooked to something as powerful as ‘office’, which his father Balasaheb Thackeray wouldn’t touch, for all the perks that come with it, with a bargepole?

Uddhav Thackeray also seems to have come to the conclusion that there is no going back now. His “leave the family out of it” is not capitulation, it’s a rethink in strategy, even warning, and outright challenge. But, if it is that, why hasn’t UT unleashed the state and Mumbai Police forces on BJP leaders who for all we know must also have skeletons buried here and there?

The Shiv Sena and the BJP were allies for 25 years, long enough for either of them to take to heart “till death do us apart.” The BJP has been acting the jilted lover and, as we know, “hell hath no fury like an ally scorned!” The BJP is smarting. So much so, even “family” is no longer sacrosanct, or protected, left out of the recriminations cycle.

Uddhav Thackeray calls such tactics “vicious things”. The imagery brings to mind cobras and rattlers; pliers and tweezers. But he also said, “We never bothered your family members”, following it up with “it is not that we are saying that your families have done something wrong or that they have something that we can (use to) trouble you with.”

Those who know politicians and politics will understand. Political parties can afford bands of the best of lawyers and no politician is “jailed”, he is “incarcerated”, which is different—Veer Savarkar was jailed, Jawaharlal Nehru and Mahatma Gandhi were incarcerated.

Thackeray’s words have meaning for the BJP. The Sena has started talking of taking to the streets, like its cadres did “after the Bombay blasts”; also about what could happen if the BJP crossed a certain imaginary Lakshman Rekha. The BJP cannot complain because it is its “selective targeting of political opponents” that has brought things to such a pass.

And, now that the selective targeting includes Uddhav’s brother-in-law Shridhar Madhav Patankar, the “family” Uddhav Thackeray was talking of, there is nothing left to talk about. In February, Sena spokesman Sanjay Raut had charged the BJP with using central investigative agencies to “try and topple” opposition-ruled governments.

The fact of the matter is, politicians as a group do not automatically enjoin trust. They aren’t considered the best of our species. There is rarely one without blemish, and even those are susceptible. Why is Shiv Sena panicking if family members of Sena leaders are innocent of any wrongdoing?

What politicians seem to forget is that people are watching. The MVA government going after “innocent citizens”, who criticized it on social media, marching them head in dark hood to jail; Sena men blackening the faces of citizens, threatening them in the streets, and beating them up, like they did the retired naval officer in his apartment complex compound, all these are chickens waiting to come home to roost! (IPA Service)

Congress High Command Has To Allow Its Regional Leaders To Come Up
Posting....