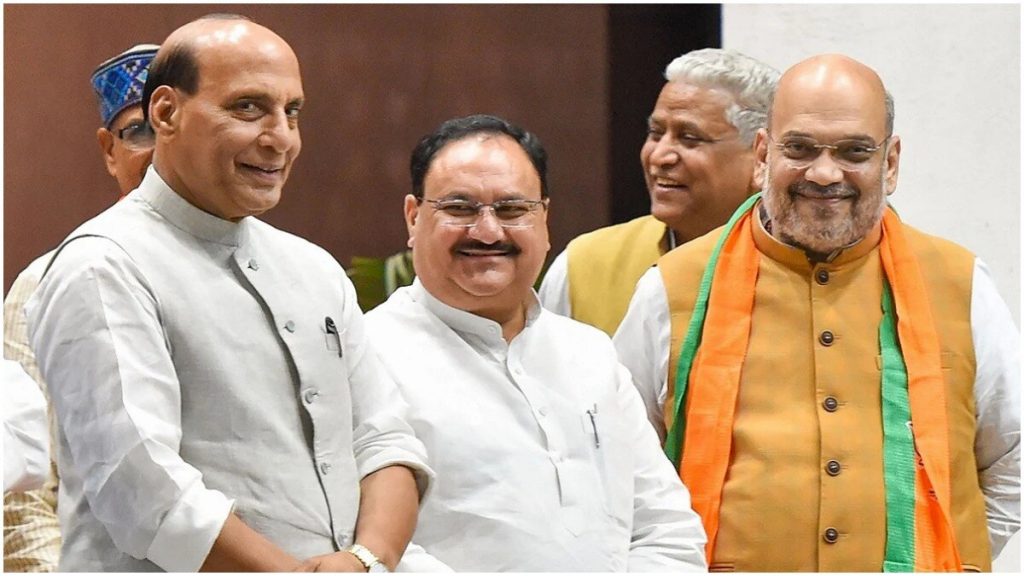 The NDA alliance can soon make an announcement of the name of its candidate for the post of President. According to sources, BJP may decide to offer the candidature of an OBC or any woman for the presidential election. The top name doing the rounds is that of the former Jharkhand Governor Draupadi Murmu. The party will announce the name of the candidate only after brainstorming and exploring all the possibilities and viewing the impact on 2024 parliamentary elections. Among others, the names of Uttar Pradesh Governor Anandiben Patel, Chhattisgarh Governor Anusuiya Uikey are also under consideration

Kerala governor Arif Mohammad Khan is believed to be one of the most vocal supporters of the Modi government and a vocal critic of “Islamic fundamentalism”. Khan has backed the abrogation of Article 370. The top name doing the rounds for the post of Vice President is that of the Governor of Kerala Arif Mohammad Khan. The “think tank” of BJP is keen on placing his candidature as they are firm in hope to improve their strength in Kerala and Telangana.  But some BJP leaders seem to think that the buzz around his candidature could result in him being set aside. Other names in discussion are of Union minister Mukhtar Abbas Naqvi and Prakash Javadekar.

After Telangana CM K Chandrasekhar Rao had tried to weave an alliance of regional parties for  a national front and it failed, KCR now  appears to  have strategically decided  to float a national party. A final decision in this regard is expected to be taken on June 19 at the extended meeting of Telangana Rashtra Samithi (TRS) executive. Political observers presume a notion that KCR apparently has decided to float a national party due to the failure to make progress in bringing anti-BJP and anti-Congress forces on a common platform to provide a national alternative. Though he had held consecutive meetings with leaders of various political parties including Shiv Sena, DMK, RJD, SP and JD(S) during last few months, no consensus could be arrived on forging a front as an alternative to both the BJP and Congress. There is a buzz that he may hand over the gaddi to son K T Rama Rao to focus on national politics.

CONGRESSMEN IS COMPARING RAHUL GANDHI WITH MAHATMA GANDHI FOR HIS GRIT

Protests by Congress for three days continued over Rahul Gandhi’s ED questioning outside the party headquarters on Delhi’s Akbar Road and well outside the ED office too. Congress leaders claim that neither Rahul Gandhi nor the party will be afraid by ED’s probe into the National Herald case, as the party has a rich heritage of fighting and winning against the British. This leads to the drawing of similarities between the Congress’s role in the freedom struggle and the fight against the BJP led union government.  The party has been tweeting from its official handle the photographs of Rahul and the Mahatma to relate both of them and has used the caption – the voice of truth: Could not be subjugated then, will not be subjugated now. “We are Gandhi. Struggling for trust and justice is our identity,” it said.

Less than a year is left for the assembly elections in Karnataka. Some BJP leaders have sought to project party strongman B S Yediyurappa’s son B Y Vijayendra as the future Chief Minister. While former chief minister BS Yediyurappa may be out of power in Karnataka but that did not stop him from announcing that his son BY Vijayendra, who is currently the party Vice President, would contest the 2023 assembly polls.  Recently Vijayendra was denied a ticket to contest the MLC polls. When asked about Opposition leader Siddaramaiah’s comments that Yediyurappa and his family have been sidelined by the BJP, he said that he does not need a certificate from Siddaramaiah. With considerable clout among the youths, the party is unlikely to ignore Vijayendra for too long. (IPA Service)

PM-JAY Scheme Is Infested With Frauds And Abuses