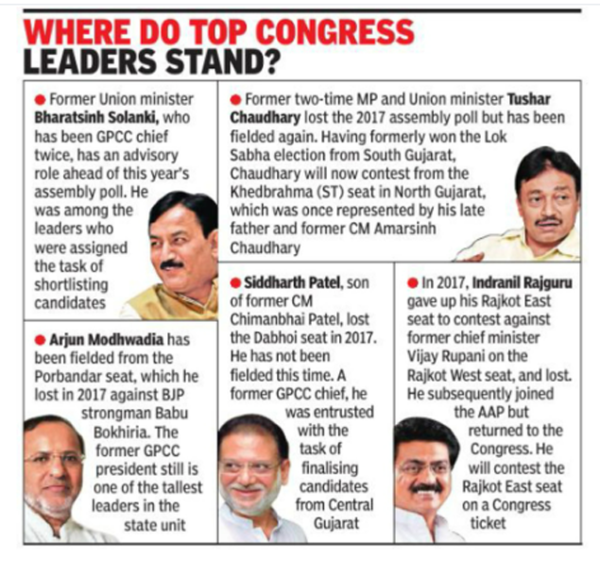 Twenty-seven years of BJP rule and the Gujarat electorate is in two minds. To vote BJP, or not vote BJP? Also, there are happy people, and there are unhappy people, both lots linked to Modi, and Modi’s doings, past and present. Again, for the first time in years, top Delhi-based anti-Modi journalists of the pre-2014 era are camping and supping in Gujarat hotels, expecting an overthrow of ‘Modi’, but at the same time reluctant to announce their presence and premise.

Just like the unhappy people, the majority of who are Muslims, and who clam up the minute talk veers to BJP’s chances and Prime Minister Narendra Modi’s hold on the political and electoral narrative on Gujarat. If the BJP/Modi supporter is unabashedly vocal, the unhappy Gujarati are inviolably silent, keeping their thoughts bottled up tight.

There is also this view that the Opposition has got inviolably divided because of the entry of the Aam Aadmi Party. Up this close to Election Day, there is this growing but unspoken sense that a vote cast in silence is the better part of valour. Buttonhole a couple of the unhappy people, and they will say that the Aam Aadmi Party’s entry has led to disarray in the Opposition, which will benefit the BJP.

It is the same everywhere, from Rajkot to Jamnagar; from Somnath to Dwarka, BJP voices are booming, the loud assertions tipping the scales in favour of BJP candidates, reminding the electorate that every vote cast for the BJP is one cast for Modi, and Modi alone.

So, look smart, and lively about it. It was Modi who made Gujarat and now it’s time Modi gets his payback paycheck, once more reinforcing the premise that this edition of the assembly elections also hinged on Modi. Whether in Rajkot, Junagadh, Somnath, Porbandar, Dwarka or Jamnagar, either you are with Narendra Modi, or you’re against Narendra Modi, take your pick.

Unsubtle. And not a little unnerving. Gujarat’s voters are still digesting what Union Home Minister Amit Shah meant with “the BJP taught a lesson to rioters in 2002”? This close to Election Day, and a large percentage of voters haven’t come to terms with the inevitable foreboding conclusion.

Besides, the electoral dilemma is refusing to come to a decision. Twenty-seven years is a long time and the electorate is bored and divided; baffled, too. The Congress share of the vote is stuck at around 30 percent. The BJP is in the high 40s. Will the AAP corner at least 20 percent? In which case, between the BJP and the Congress, which one will be the clear winner?

For the disillusioned voters, among them many who voted BJP throughout the 27 years, voting BJP is extending the disillusionment. AAP’s freebies are low-hanging fruit. But both BJP and Congress are hanging their shingles on the often-held premise that the Gujarati by nature doesn’t join the langar-line; on the contrary, he is the one ladling out largesse.

It is very unlikely AAP freebies will fetch a difference for the “Delhi party”. The overwhelming consensus is that voters will ignore everything and everybody and vote in the name of Modi, and Modi  alone. Even the death toll from the Morbi bridge collapse has not cut ice with the electorate. Attempts by certain pockets of journalists to draft an anti-Modi narrative have failed to upset the status quo of 27 years.

The AAP is confident that if not now, another couple of electoral terms later, the Gujarati’s allergy towards freebies will be broken, and then it will be a free run to the top of the plate. The AAP’s claim on the freebies election plank will last and given time break resistance everywhere in the country, one state at a time, till all of India is laid waste to the freebie culture.

What everything for nothing does to the spirit of India is unimaginable. Already, AAP-ruled Delhi and Punjab are running on empty and the remaining states wouldn’t be able to hold on for long against freebies, especially when there’s such an ugly distribution of wealth, and such stark differences in incomes. Either give people free rations, free awas yojana, or wait for Armageddon! (IPA Service)