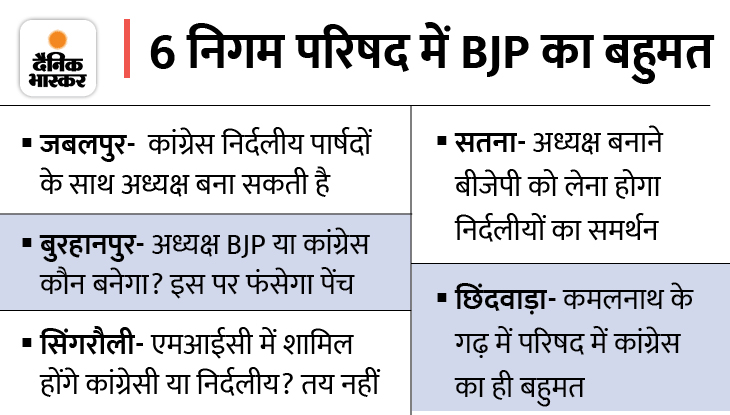 There are several highlights of the results of local body election announced on July 17. The first and most important highlight is the gain made by the Congress which captured Mayors post in three municipal corporations. The second is the humiliating defeat suffered by Jyotiraditya Scindia in Gwalior where he and his royal family never suffered defeat in any election since independence. The BJP lost this seat despite the fact that Gwalior happens to be stronghold of union minister Narendra Singh Tomar.

The capture of three cities is regarded as personal victory of Kamal Nath. Kamal Nath is regarded as a great electoral strategist. This was proved when he defeated BJP in 2018 assembly elections and now in the local body elections. The Congress has been losing Gwalior during last 58 years. The Congress also captured Jabalpur after losing continuously for last 23 years. Another crucial victory was in Chhindwara which Kamal Nath has been retaining since 1980 as Lok Sabha member only losing once.

But despite losing three Mayor cities to Congress and one to AAP, the BJP retained its commanding position in the local body elections results of which were announced on Sunday.. As per Chief Minister Shivraj Singh Chouhan’s statement, BJP won 7 out of 11 mayors’ seats and 27 out of 36 Nagar Palika presidents’ seats. On several seats of mayors and Nagar Palika and Nar Parishad presidents the results were yet to be declared till late night but BJP was leading in most of seats as per the trends.

Under the first phase, polling was held in 11 municipal corporations, 36 nagarpalika and 86 nagarparishad. Counting of votes began at 9 am amid tight security arrangements across the state. The mayors seats won by BJP include Bhopal, Indore, Sagar, Satna, Khandwa, Ujjain and Burhanpur.

In Chhindwara, Congress candidate Vikram Singh Ahke won against BJP’s Anant Kumar Dhruve by a margin of 3786 votes. Ahke polled 64369 votes while Dhruve got 60577 votes. In Jabalpur Congress candidate Jagat Bahadur Singh got 296192 votes to defeat his nearest rival BJP’s Dr, Jitendrra Jamdar by a margin of 44339 votes. All India Majlis-E-Ittehadual Muslimeen led by MP Assaduddin Owaisi played spoilsport for the Congress in Burhanpur where its candidate Shahnaz Bano .lost to BJP’s Madhuri Pate by a magin of 532 votes. Interestingly NOTA got 677 votes which were more than the victory margin.

Another highlight of  results is the entry of two political forces in M.P. politics causing worry to  both for the BJP and Congress. They are AAP and AIMIM. In a stunner AAP mayoral candidate for the industrial town of Singrauli, Rani Agarwal won with a margin of 9149 votes beating the BJP’s Chandra Pratap Vishwakarma and Congress’s Arvind Singh Chandel.

AAP mayoral candidate from Singrauli Rani Agarwal had contested the 2018 assembly election on an AAP ticket but lost. However, for the Singrauli municipal corporations elections, Delhi chief minister Arvind Kejriwal campaigned for her three days before polling.

The total number of votes cast in Singrauli was 106000 of which Agarwal secured 34585 while he nearest rival, the BJP’s Chandra Pratap Vishwakarma got 25233 and Congress candidate Arvind Chandel received 25031 votes.

In  a state which has mainly  seen bipartite politics with the BJP and Congress no third party whether BSP or the Samajwadi Party could make much progress. For 65 years since the birth of the state, politics has always been the battle between the Jan Sangh and Congress and later the BJP and Congress. But after Sunday’s urban civic poll results, it was apparent that AIMIM has spoiled the chances of Congress win while AAP has cut into BJP votes.