Implementation Of Labour Codes Gets Complicated 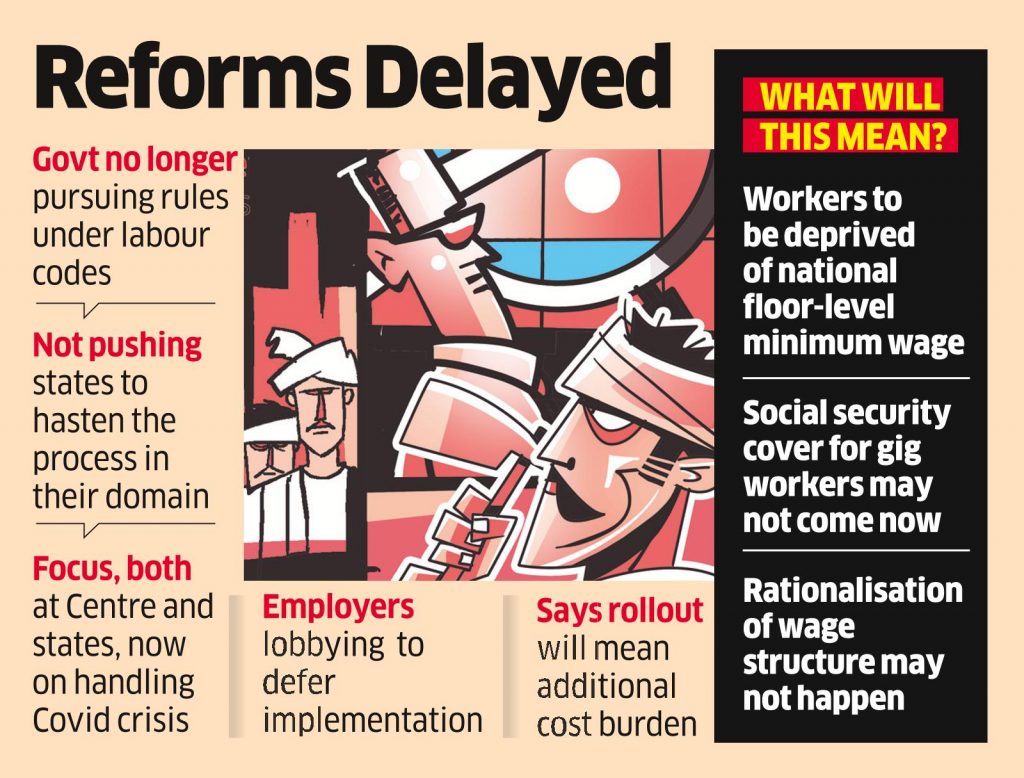 The implementation of the four labour codes gets complicated and there is no sign that Modi government will be able to roll these out. Hurdles are many in the way: All states are not yet ready with their rules; SP Mukherjee Committee will not be able to come out with its report on minimum wages before September; the organizations of employers and industries have raised their concerns on two of the Codes; CTUs have hardened their stance demanding scraping of the codes; apprehension within the government about the political fallout of implementation and divergence of views regarding time and manner of the rolling out of rules.

No wonder, the tone and the tenor of the Union Ministry of Labour and Employment has considerably changed, and it is learnt that they are now open to review some of the provisions of the rules already framed under the codes – especially relating to the Codes on Wages and the Code on Social Security. Bhupendra Yadav the Union Minister of Labour and Employment has said that the “new rules will be implemented at an appropriate time.” However, he did not explain what he actually meant.

It is a general belief in the ruling establishment that the appropriate time has already been lost. Five years have been lost since the process of making of the codes was started in 2017. The Code on Wages was passed in the parliament in 2019, and the Code on Industrial Relations, the Code on Social Security, and the Code on Occupational Safety, Health and Working Conditions were passed in 2020. Since labour is a concurrent subject, states too required framing their rules and publishing them before final notification by the centre for their implementation. The states could not do so because they were busy in handling the COVID-19 crisis. Several implementation deadlines were missed, the latest being from July 1, and now it seems the ‘appropriate time’ for implementation may not come soon due to inherent hurdles and increased complexities. It may be now delayed to the end of 2022 or early 2023, and if apprehension of adverse political fallout gets stronger, Modi government may altogether defer it for 2024 after the Lok Sabha elections.

States are even complaining that the rules under all the four codes are poorly drafter. Minister of Labour, government of Kerala has even said on record in the Kerala Assembly that the state prepared the draft rules hesitantly as most of the provisions in the codes are “anti-worker”.

There are also differences within the central government. Even Economic Advisory Council to the Prime Minister has said in a report last year that the four codes are simple aggregation of the 29 laws and did not taken certain discrepancies into consideration. In place of these four, India needed only one comprehensive labour code.

There are also differences in the manner of implementation. Some in the government wants their implementation at one go while others say that they should be implemented in phased manner in the present situation.

Setting a national minimum wage is an important provision under the Code on Wages. SP Mukherjee Committee is working for this with numerous hurdles. It is not likely that it could submit its report before coming September. After great disagreement among the members only the methodology to calculate minimum wage has been finalized which will be based on nutritional requirements and consumption expenditure, for which trade unions were pressing. Mukherjee was supporting another methodology based on multi criteria decision making. There are still difficulties, because the committee will also need to take the views and suggestions of the industries and business, apart from bringing the cost of food price index of 2022 into consideration and not relying merely on the decade old data of 2011-22.

Employers organizations such as CII and FICCI have expressed their reservations on the proposed rules for minimum wages and social security. It is in this context Union Ministry of Labour and Employment has offered to review the rules after further discussions. Employers are concerned that the implementation of the codes would increased financial burden on then at a time when they are suffering from a great financial crisis.

The joint front of Central Trade Unions has already hardened its stand. They are demanding scraping of the codes since the implementation of the codes, they say, would push majority of the workforce out of the coverage of labour laws. They have already held three general strikes against the codes and preparing themselves for even stiffer fight. CTUs have also asked the center to stop piecemeal approach and release the complete rules of all the four labour codes.

Even pro-BJP Bharatiya Mazdoor Sangh (BMS) is opposed to the Industrial Relations Code and certain provisions of the Code on Occupational Safety, Health and Working Conditions. BMS is also opposed to implementing the codes at one go. It says that differences must be resolved by consultation with all stake holders and only those rules should be implemented first where there is unanimity among workers, employers, and the government. BMS has also voiced concerns on Codes on Industrial relations, specifically on the provisions for the registration and working of central trade unions.

The Union Ministry of Labour and Employment have been engaged in discussion with trade unions and industry representatives to find out solutions to the difficulties expected from the proposed rollout of the labour codes. Fresh offers have now been given by the Centre to trade unions and employers organizations for discussions to iron out differences. (IPA Service)