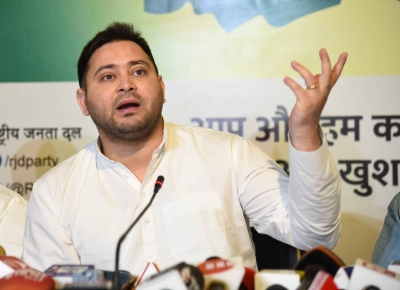 The deputy chief minister of Bihar Tejashwi Yadav, the youngest son of Lalu Yadav cautioned on Wednesday the three investigating agencies,  ED, CBI  and IT the jamais (son in laws) of the BJP government, to refrain from indulging in nefarious game of victimizing Lalu Yadav and other RJD leaders. He alerted them not to fall in the trap of the government and help the politics of vendetta. He did not mince words in saying them to refrain from implicating them in false cases, not to harm them and malign their images.

Unmasking the CBI conspiracy to involve him in Gurugram mall case, Tejashwi produced clinching evidences to substantiate that the property is not owned by him nor he is related with it in any manner. He accused the CBI of entering into conspiracy with the political forces to falsely implicate his name in the case and malign his image. Showing a bunch of legal documents he said the company constructing the mall had directors and shareholders based in Haryana.

“The company was incorporated in February 2021 and there are two directors and two shareholders. I have got nothing to do with the upcoming mall.” He nevertheless announced if it proved that the property belonged to him then in that case; “I will donate half of the mall to the people of Bihar, half of it to BJP leaders and rest to the CBI”. He outright dismissed that his close aid Sanjay Yadav has any link with the company. Without identifying the news channels he however cautioned them not to become a partner in the nefarious game of the people sitting in Delhi. It would prove dear to them.

Tejashwi also played two video clips and said a BJP MP and mayor of Gurugram were present during the inauguration of the project. “Even chief minister of Haryana, Manohar Lal Khattar, had praised the works of the company constructing the mall to which my name has been linked by a certain section of the media,” he lamented. He was highly critical to the Bihar BJP leaders who were fanning this misinformation. He said “BJP ministers, especially the one who was dreaming of becoming CM should now become cautious”. “This is Bihar. Nobody from Delhi would come to save them,” Yadav said, without taking names.

Tejashwi has been in politics for long years and was also the Deputy CM in 2015, but his anger never got manifested in public. He never showed his aggressiveness. This was for the first time his anger and distress came out open. His challenge to the three agencies comes at a time, when politicians are scared of the raids and find it hard to muster courage to speak against them, clearly manifest his determination to take his political opponents by horn. At one stage, while talking to media persons he expressed apprehension that the CBI may lay its hand on him but he is not scared of that situation.

He even told the officials of the three agencies, particularly of the CBI to think of their post retirement days. There will be no one to take care of them. Once they retire they will not enjoy the power and privileges they were wielding before the people the country and Bihar. They must not behave like a pawn in the hands in the politicians sitting in Delhi and trying to manoeuvre the situation which suits them from there.  He said “Several scams have happened after fodder scam, but CBI, ED, Income Tax target only one person. Is the CBI forgetting Vijay Mallya, Nirav Modi, Mehul Choksi, Lalit Modi and others?” He accused the CBI sleuths of working in a partisan manner and tried to intimidate RJD leaders during the raids on Wednesday.

The deputy CM also alleged that CBI sleuths were working in a partisan manner and tried to intimidate RJD leaders during the raids on Wednesday. “ My sources said CBI officers asked RJD leaders to snap ties with party chief Lalu Prasad or else face consequences,” Yadav, who is the younger son of Lalu Yadav, said. He ridiculed the CBI for registering a case in May 2022 in relation to the alleged land for job scam after almost 15 years since former railway minister Lalu Yadav demitted office spoke volumes of functioning of the agency. “Why has the CBI woken up so late,” he asked.

In his desperation to obliterate the national opposition and regional parties Modi has literally repudiated to adhere to the ethics and norms of decency in politics and instead has resorted to scheming of having complete dominance of the BJP in Indian politics. While his design is not simply of the nature of carrot-and-stick policy to destroy the opposition it is more of the deviant nature aimed at completely finishing the social and culture contour of the political ethics and norms.

There is a distinct pattern in the use of ED, CBI and IT by Modi against his detractors. This has multiplied manifold during the last 18 months. Opposition leaders have been at the targets of the raids. It is primarily aimed at terrorising and humiliating them. As revealed by Tejashwi yesterday the role of the Godi media have launched a vitriolic campaign against these leaders. It is equally interesting to watch that in most of the raids the “jamais” have not succeeded in procuring clinching evidences to nail the alleged offenders. Obviously this raises questions on the nature and intentions of the raids. It is said that more than 3400 raids have taken place but people in not more than 30 cases have been convicted.

Intrinsically the known corrupt politicians turn pious, like a Tulsi Leaf washed in Cow Milk, once they joined the BJP. We have seen, at least in Bengal, how the TMC leaders who were named in the multi crore Sharada and Narada scams, became the most honest persons after they joined BJP. Most of them are now prominent faces of the party and occupy important positions. Even a sarcastic jokes making the round of the political circle underlines that once these people join BJP they become the relatives of Satya Harishchandra.

Interestingly the CBI action was planned to coincide with the move of Mahagathbandhan government seeking majority test on the floor of the House. The Nitish Kumar-led government won the confidence vote with 160 votes with the BJP staying away. The sources are to be relied, the CBI is once again planning to arrest Lalu Yadav in connection with land for jobs scam. The central agency had registered a preliminary enquiry on September 23, 2021 related to the land-for-jobs scam in Railways which was converted into an FIR on May 18 this year. The agency has alleged that land measuring about 1.05 lakh square feet in Patna was acquired by Prasad’s family members by making payments to the sellers in cash.

On Tuesday in his speech in the assembly Tejashwi had said; “My father Lalu Prasad, mother Rabri Devi, my sisters and I are all paying the price for our commitment to socialism. The CM and I have the same ideology. You (BJP) cannot reap what we socialists have sown”.

Former Chief Minister Rabri Devi, whose Patna residence was raided by the agency in connection with the case told, “The people are watching and they can understand what is behind these raids.” The sources reveal that Tejashwi is also contemplating to move the Supreme Court against the vindictive designs of the CBI. He will approach the to direct initiation of legal action against the officials indulging in nefarious game of implicating the RJD leaders in false and fabricated cases. (IPA Service)