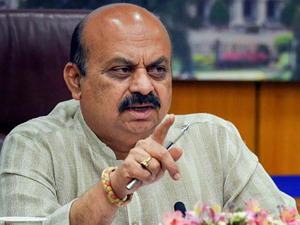 There is no hard and fast rule that says the son should be like father. Otherwise, Aurangzeb would not have taken his own ship to the horizon after sinking Shahjahan’s luxury yacht. Karnataka Chief Minister Basavaraj Bommai is accused of dumping his father’s socialism for BJP’s rightwing-ism, and making a mess of Karnataka’s prospects. “How could he?” will dog Bommai till the eve of his stay on earth. Basavaraj Bommai maybe King of Karnataka, but the system stands locked against him.

Bommai is seldom spoken of in fine terms. The socialist in him took a hard right turn a decade ago, and since then he is no patch on his diehard socialist father. In fact, SR Bommai’s son doesn’t get the respect the father commanded. Only the morally deficient would give up his impeccable socialist credentials for a badge of rightwing bigotry.

Basavaraj Bommai wasn’t supposed to have a mind of his own. Instead, he behaved like the Mughal prince. He imprisoned his father’s ideology, and embraced the enemy’s. And, but for SR Bommai’s hard won reputation and standing in public life, the world would have held the father guilty for the son’s “poor upbringing”.

The reality is Chief Minister Basavaraj Bommai’s sins (in the eyes of the Opposition) outnumber his good deeds. And among the Bommai government’s biggest sins was fanning the “regressive” anti-hijab movement. The fundamental right of the woman to live her life according to her freedom of choice cannot be muzzled by the government, which the Bommai government did.

Multiple courts have now endorsed that the Indian Muslim community should be judged in accordance with the Sharia. A slew of recent judgements of different courts point to this gathering trend; from a minor Muslim girl can marry at puberty to Hyderabad police officers telling “Sar Tan Se Juda” champions “don’t worry, we’re with you”.

In contrast, by taking on an anti-minority’s stance, at every step of the way, the Bommai government deliberately committed wrongs against the minorities in the state, displaying its acute antipathy towards the Muslim community, while appeasing the BJP’s Hindu vote-bank.

The violence and the communal killings that followed “hijab and halal” were a direct result of the blatantly communal policies of the state. The Bommai government spent more time plotting the demoralization of the Muslim community, and deriding their religious values, than in giving good governance to the state, which had been doing fine till the BJP stole the state elections, all the while shirking its duties towards the people of the state.

There are any number of examples of the Bommai government making a mess of the state, but one that is very recent is about the Chief Minister trying to dismiss comments attributed to a minister, in which the minister let it slip that the Bommai dispensation was more or less “non-functional”, and just about “managing things” to just about survive!

Of course, this could have been a disgruntled minister, but that didn’t take away from the fact that the minister couldn’t have spoken from a position of ignorance? Chief Minister Bommai attempted to deflect with his own comment that the minister’s comment was made in a “specific context”, which was limited to the cooperative sector; otherwise the government was on a roll and couldn’t be doing better.

But the audio clip had done its damage; leaked and posted by a Congress worker. It pointed to corruption in the Bommai government with the charge that the state government was not doing anything to book the culprits. The one time socialist Basavaraj Bommai allegedly attempted a cover-up by saying “I am aware of all these things, it has been brought to the notice” of the co-operatives minister. The opposition Congress says it is an example of “incompetence of the ministers and the negligence of the Bommai government”, which was harming the interests of the state and its people. (IPA Service)