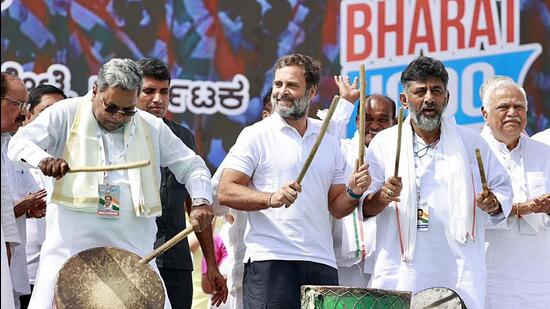 The Congress ‘Bharat Jodo Yatra’ has been in Karnataka since September 30. It rolled in from Gudalur in Tamil Nadu to Gundlupet in Karnataka. Add the third ‘G’, ‘Rahul Gandhi’, and it will be like the stars were in alignment. Rahul Gandhi started the Karnataka leg of ‘Bharat Jodo Yatra’ from Mysuru with a speech delivered in heavy downpour. The rain refused to let up as if in consonance with the tone and tenor of the speech, which was “nothing can stop us now”.

The Karnataka-leg of ‘BJY’ will stretch for 21 days. Reports are Sonia Gandhi will join Rahul Gandhi at the helm of the ‘Yatra’ on October 6. That is double the Gandhi-power the Kerala-leg got. Sonia’s presence would also emphasize how crucial ‘Bharat Jodo Yatra’ is for the Congress, especially when the ‘Yatra’ is in Karnataka.

More so, when it’s a fact that the ‘Jodo’ part of ‘BJY’ isn’t what it conveys. The only “jodo” that ‘Bharat Jodo Yatra’ will accomplish is that it will help concentrate as much of the electorate behind the Congress ’hand’ as is possible in the current circumstances.

In Karnataka, this will translate to bringing as many of the various Kannada-speaking “peoples” in the Congress corner. The “various peoples of Karnataka” include those of the Lingayat sect which considers itself a separate religious identity. In August this year, Rahul Gandhi took “initiation” into the Lingayat sect by tying what’s called an “ishtalinga” across the chest.

This lends to Rahul and the Congress a political edge as the Lingayats can on their own tip the scales in any election. The ‘BJY’ will further polarize the Lingayat vote. This must be giving the BJP the jitters. For the BJP, Rahul’s trudge across Karnataka is ‘Bharat Jitters Yatra!’ BS Yediyurappa, the BJP’s main Lingayat, will agree with more worry-lines on his well-worn brow.

Among the other “peoples” Rahul Gandhi’s ‘Bharat Jodo Yatra’ will try to consolidate behind the Congress will be the Muslims. Know that the Congress faces stiff competition for the Muslim vote from the JD(S), AAP, BSP, and Asadudddin Owaisi’s AIMIM. Then, there’s Narendra Modi’s “Pasmanda-push”, and Mohan Bhagwat’s “madrasa calls”.

Both Modi and Bhagwat are recent upholders of Islamic values. And some of the Muslim-stakeholders are reciprocating. How much of this reciprocation will convert to votes is a shot in the blackhole. Rahul Gandhi’s ‘BJY’ aims to cut through the fluff and gather all the Islamic warriors behind the Congress flag.

The Congress flag by the way is missing from the ‘Bharat Jodo Yatra’, and in its place, there’s the ‘tricolour’, a deliberate decision because for the Congress, it is ‘Bharat jodo’ and not ‘Congress jodo’, which, some would say, is more the need at this time when the Congress is going through a churning.

With Rahul Gandhi, Sonia Gandhi and the putative Congress president, all three of them spearheading the ‘Bharat Jodo Yatra’ through Karnataka, even if for a short period only, the ‘BJY’ will gain further momentum and hopefully strengthen the Congress ‘hand’ in the forthcoming assembly elections. If that happens, Rahul Gandhi’s ‘Bharat Jodo Yatra’ will have fulfilled its purpose in Karnataka, and Kharge’s Dalit caste will also perhaps join in the celebrations.

That being said, Karnataka is cut from the same cloth as the rest of India even if there’s an impression going around that South India is a piece of different fabric. The concerns ailing the common man are the same throughout India, whether its price rise or unemployment, or the strong feeling of communal alienation. The ‘BJY’ met resistance throughout Kerala from a feeling of communal divide, climaxing with the ban on the PFI, which effectively guillotined the Yatra’s chances of patching up Hindu-Muslim differences.

That being said, the importance of ‘Bharat Jodo Yatra’ to the Congress in Karnataka remains crucial. The ‘Yatra’ in Kerala gave to Rahul Gandhi the tags of “courageous, ethical, honest, democratic and nationalistic”. The Karnataka leg calls for a far more combative Gandhi. Not just the good guy’s smile and hugs, but the grit of a commander leading the army into battle. Gujarat might be out of reach, but Karnataka can be within Congress grasp if Rahul Gandhi’s ‘Bharat Jodo Yatra’ does its bit. (IPA Service)

Polarised Brazil Poised For Run Off On October 30 As Lula Is Short Of Majority
Posting....