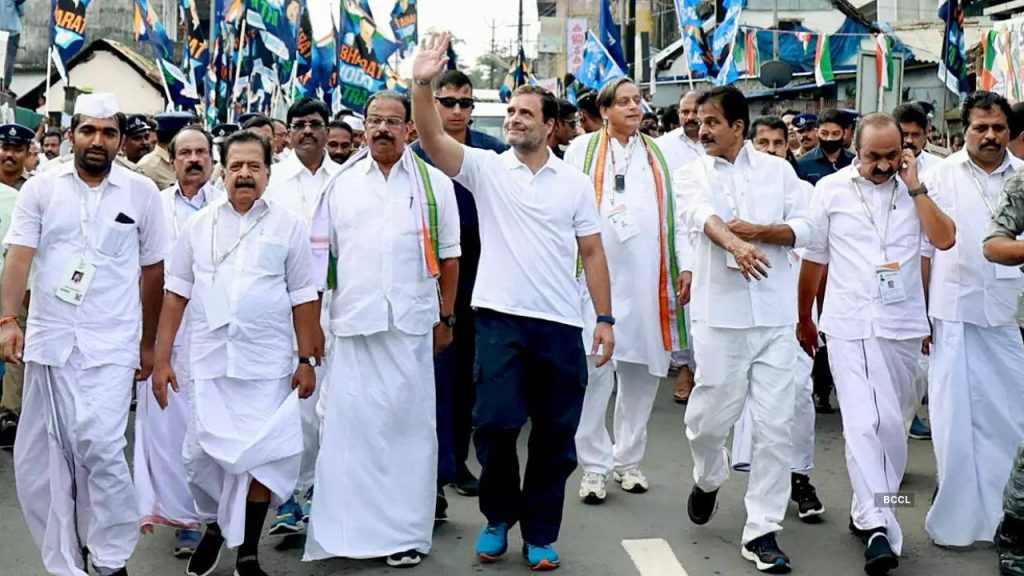 With Narendra Modi‘s archetypal Hindutva political edifice developing cracks and the party device finding it incapable to withstand the onslaught of Congress Party’s Bharat Jodo Yatra, the BJP top leaders have preferred to adopt a more virulent and belligerent posture against Rahul Gandhi. Adopting aggressive stance is the best mechanism for both the leaders to save their political future and survive the onslaught.

Apparently on the surface, both Modi and Shah project them as impervious souls, who are creators of the destiny and define the progression of the lives of crores of Indians, the fact is they foresee apparition of cracking of their so called ideological deify and smearing of their face and image.BJP is certainly not afraid of Congress, instead it is fearing Rahul Gandhi giving a pro people orientation to its ideological narrative and luring away the large section of the urban middle class which has so far been their publicist.

It is a fact that notwithstanding their consistent rhetoric of nationalism and Hindutva a major section of the Hindus are finding it tough to accept what they say. They see a vast difference between their preaching and practice. These people who had jumped on the bandwagon of the saffron forces, are going through the phase of introspection. This in fact is the major cause of anxiety for the two leaders.

Otherwise too the rightist elements are inconsistent in their allegiance. They prefer to identify with the fascist and rightist forces to a certain extent. Not beyond that. The urban middle class is yet to be indoctrinated of the rightist ideology. They are simply of the nature of turn coats. It was their yearning for prosperity and bright future that conjured them to support Modi and become Modi Bhaktas.

The Hindutva Bhaktas, or Modi Bhakts, could be classified in two classes; one is the well-off urban middle class and second, the members of the OBC and EBC, especially the youths who aspire of political ascendance. The first section is quite vulnerable to the changing times and politics and cannot continue to support RSS and BJP for long.

The second class is not cynical enthusiasts of Hindutva though they are vocal. Their main motto has been to use the BJP and Modi rule for their upward mobility and to be counted amongst the decision makers. Though there are regional parties in the states, like Samajwadi Party in UP o and RJD in Bihar, representing the aspirations of the OBCs and EBCs, they find BJP as an easy and better alternative as it is still in the process of expansion. In Bihar and UP the BJP has preferred OBC and EBC leaders to the upper caste leaders. Even in Bengal these people especially who have migrated from Bihar and UP, are rallying behind the BJP and RSS.

The urban middle class is already drifting away could be discovered from the defeat of the BJP even in the places where the Modi bhakts have significant presence. There is no denying the fact that the BJP has been Congressised after Modi becoming the prime minister. His slogan “Congress Mukta Bharat” was primarily aimed at winning these people away from the Congress. In the 2019 Lok Sabha election these people had solidly rallied behind the BJP, with Modi making the promise of bringing down moon to their door step. But the post-election developments have exposed his hypocrisy. They have come to subscribe the people’s perception that his promises are simply hoax and he speaks simply lies.

RSS cadres and Modi fanatics might nurse the feeling that Congress is incapable to challenge the BJP’s political hegemony. But it is not with Modi. An insight into his consistent attack on Congress makes it explicit that he, even after Congress’s worst performances in the election, treated it with extra caution. The Congress may prove to be phoenix.

From the beginning Modi and Shah were panicky of the Bharat Jodo Yatra. They were sure the success of the Yatra would determine the dimension of their politics and design to turn India into a Hindu Rashtra. It was with this in view the BJP launched its vitriolic against Rahul and his Yatra from the day it took off from Kanyakumari, September 7.With the BJY getting unprecedented response, the BJP pressed its dirty tricks department to unleash malicious campaign against Rahul. Even Rahul alleged that the BJP top leaders have been busy trying to malign his image by spending crores of rupees but the truth could not be suppressed. “Their attacks indicate that I am on the right path. My strength is that now I understand the RSS-BJP much better,” he emphasised.

Modi’s venomous crusade against Rahul, makes it explicit that ‘Bharat Jodo Yatra’ is on the right track and has shaken the trust of the BJP in the people of the country. The BJP has added two new issues to its hatred campaign against Rahul and Congress; first, how can Rahul unite India when he is incapable of getting his own house in order, and the second is, the communists and those advocating the political line of tukdetukde of India are infiltrating the Congress on large scale.

What is Rahul Gandhi walking for? He is certainly not walking for Congress Bachao. Though this yatra he intends to win over the lost trust of the urban middle class and prepare a new space amongst the poor, dalit and labourers, which so far has been traditional support base of the Left forces. It cannot be denied that Rahul’s BJY has erased the sense of fear from the minds of the people. Even before launch of the Yatra these people were scared of CBI and IT and punitive action by the police. Delhi police has earned the worst notoriety in this matter in the country. The Delhi police takes orders from thelocal street level BJP workers rather than its top officials for arresting and putting in jail the political opponents of BJP.

An insight into the mode of Yatra will make it evident that it has chosen its route through the BJP ruled states only to take the people out of fear syndrome. And it has worked. The massive and unprecedented response throughout the course of three month old March makes the clear message that people irrespective of political and social obligations and leanings are joining the Yatra with the hope that it would eradicate politics of hate and fascism.

The BJY has changed the perception of the people towards Congress got manifest in describing Rahul as Tapasyi. Addressing a rally in Madhya Pradesh he said; “What we are doing is nothing; maybe a tapasya for three months. The real tapasya is done by the farmers who wake at 4am daily and feed the nation with their blood and toil. The youth who struggle to complete their studies and their families who support them despite financial strains. Tapasya is done by the small shopkeepers and modest industries, which create livelihood for people.”

He added: “But two industrialist friends of Narendra Modi, who worship him day and night, get everything. Two, or five, industrialists can get whatever they want — ports, airports, railways, roads, power. Modi is handing over the nation’s entire wealth to them. But those who struggle, serve this country, get nothing. I met thousands of farmers during the Bharat Jodo Yatra and they told me they neither get the right price for their crops nor support of any kind.”

Rahul’s extreme emphasis on BJY, apparently his even not focussing too much on the Gujarat election which has been a struggle for survival for Modi, has created much discomfiture amongst the Congress leaders. They nurse the view a small thrust from Rahul would have swung the public mood in favour of the Congress. But for Rahul keeping away from the Gujarat battle is the part of the strategy. His absence from Gujarat is in fact a test of the success of the BJY mission. He is already on the record; ”Bharat Jodo Yatra has not been planned for political returns. Instead its sole purpose is to convince the people that India would suffer irreparable damage if it continued on its current path. This Yatra has gone beyond the Congress. It now represents India’s soul, it reflects India’s voice.”

He said; “The spirit of the Yatra is to make the country focus on the attempt to change its nature. This country has never been fearful. Even in the worst of times, India was not scared. The people of India have a particular culture — the culture of compassion, of respect, of affection. This is our biggest strength”. Rahul is preparing the Congress for a long term ideological struggle against the saffron forces. (IPA Service)