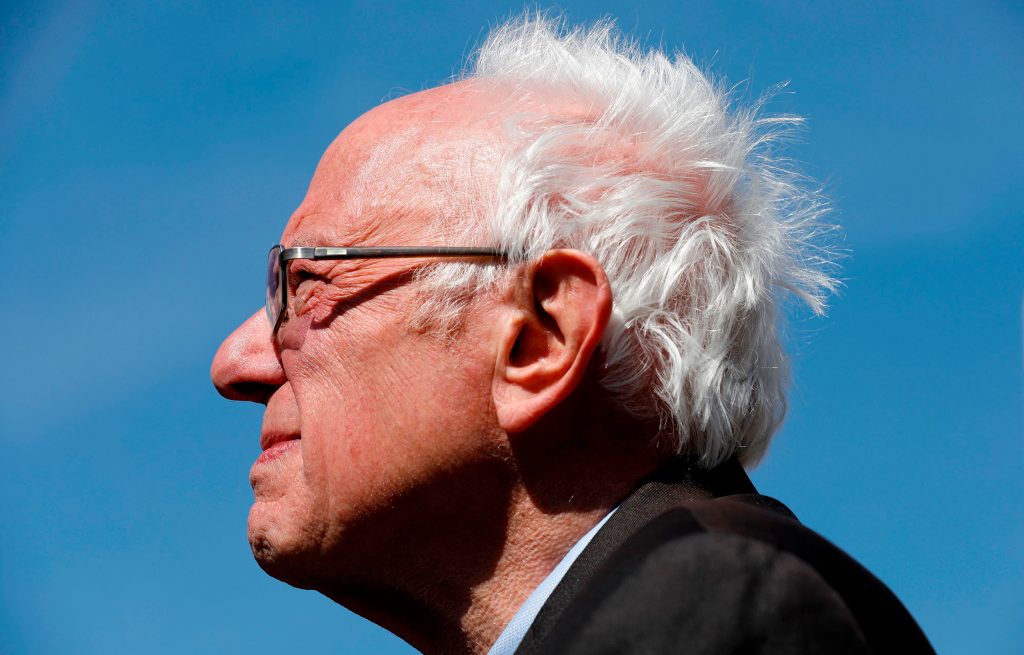 Allow me, for a moment, to indulge my inner Tom Friedman. A few weeks back, I was exchanging the usual banter with a taxi driver, Amandeep, an Indian immigrant who had lived in New York nearly two decades, when the conversation turned to politics. After telling me about the racist and sexist treatment she sometimes gets from passengers, Amandeep bluntly told me how little she thought of President Joe Biden — and how much she missed Donald Trump.

Biden, in her view, had done “nothing for the people,” and whereas inflation was currently burning a hole through hers and everyone else’s wallets, things had been good under Trump. It wasn’t just the stronger economy. Amandeep remembered the stimulus checks she’d gotten from Trump, checks that, at least as she remembered it, stopped coming once Biden came into office.

There are ominous signs from this. This maybe an isolated view of an immigrant voter, but there   are reports of a feeling of disappointment of the American poor and lower middle class at the performance of Joe Biden.. Despite Trump and the GOP’s attempts to rebrand themselves as warriors for the working class, a Republican takeover of the federal government  in the coming presidential   elections ,would most likely mean picking up where Trump left off, renewing his assault on the poor and working class. It would mean more ballooning inequality and rising political extremism, as working people’s frustrations and bewilderment is channeled into authoritarian, conspiratorial movements. And it would mean still more precious years to act on climate change wasted, under a leadership that will do everything it can to make the catastrophe get here sooner.

It’s a bleak outlook for the rest of this decade. And yet, for the first time in a while, I’ve recently felt a flicker of hope. Multiple reports now suggest that, despite all but ruling it out after his 2020 primary defeat, Senator Bernie Sanders (I-VT) could make one more run for president.

In April, a memo surfaced from former Sanders campaign manager Faiz Shakir telling allies that “in the event of an open 2024 Democratic presidential primary, Sen. Sanders has not ruled out another run for president.” A few weeks later, NBC reported that, according to Sanders’s team, “his campaign fires are burning hot.”

In an ideal world, Sanders would be in a position to challenge Biden for the nomination regardless of whether or not the president runs again. But if Biden chooses to step down after one term, Senator Sanders absolutely must make one final run for president.

Part of the case is practical. Sanders remains the most popular active politician in America. I might not be writing this article if there were a clear successor to run in his place, even if that successor were less popular but younger. But there isn’t one. There is no other high-profile US politician today — anywhere in the Democratic Party, let alone on the Left — with Sanders’s experience, worldview, and ability to talk to and persuade people whoever and wherever they are.

For the senator himself, there are also good reasons to run again. Campaigns are about winning for Sanders, but they’ve also been about raising the profile of ideas that traditionally have found little purchase in presidential politics. That includes ideas he’s championed virtually his entire career, like single-payer health care, union rights, and limiting the power and influence corporations and the wealthy have over the destinies of ordinary people.

And sadly, a Democratic lineup without Sanders means those ideas will either go undiscussed or have their prospects seriously dented. You only need to look at the 2020 primary, many of whose candidates jumped on the Medicare for All bandwagon only because Sanders was in the race, before swiftly backing away the minute they got serious heat for it, and forgetting about it entirely once he was out. Even his closest ideological compatriot, Senator Elizabeth Warren, often garbled the case for the idea, struggling to emulate Sanders’s clear, commonsense case for replacing private insurance premiums with taxes.

Meanwhile, a Sanders 2024 run would come in the midst of rising labour militancy that has seen workers successfully unionize at both Starbucks and Amazon, both among the senator’s favourite punching bags. Sanders has been a prominent ally of both efforts from the senate, and we’ve already seen how his 2016 campaign had a catalyzing effect on the teachers strike wave that came later. If they overlap in 2024, his campaign would both benefit from this rising militancy — bringing an added urgency to his candidacy while potentially filling out the grassroots organizing operation that we only saw a taste of in 2020 — and, more importantly, feed into it, politicizing workers across the country and raising up otherwise-ignored labour battles to national prominence.

A third run would also come in the middle of an ongoing crisis of American democracy. Coming from a family that was nearly wiped out in the Holocaust, Sanders was alarmed at the prospect of another Trump win in 2020. But that prospect will be on the table again in 2024, with an even more radical Republican Party in tow and with little standing in its way. Though the senator would never say it publicly, he must know that, as Biden’s own team privately admitted, the president only defeated Trump narrowly in 2020 thanks to factors outside of his control.

Yet if Biden sits out 2024, the only thing standing between the country and another four years of Trumpist authoritarianism are a host of candidates who lack even the plain-spoken appeal of Scranton Joe, who in any case has presided over the Democratic Party’s ongoing erosion of working-class support. It would mean most likely relying on the exact kind of corrupt, business-as-usual Democratic politics that already failed to stop Trump once in 2016. And it would mean hoping against hope that, without Sanders on the ballot, the Democratic Party will embrace the kind of grassroots organizing it has rejected since Barack Obama’s two campaigns, with disastrous results. And all of it will have to succeed, this time, without a bumbling, crisis-plagued incumbent to run against.

Beating Trump again won’t be easy, and it’s not remotely guaranteed. But without another set of 2020-style world-historical crises, it’s hard to see anyone but Sanders staving off his victory in two years’ time, let alone pursuing the transformational political project needed to save the country afterward.

Warren, the most likely candidate to do the second part, is a “wine-track” candidate whose base of support is in the same kinds of affluent, highly educated areas that were a political dead end for Democrats in 2016 — and where she’s underperformed the party in her own home state. By contrast, Sanders forged his political career in rural and traditionally GOP-voting Vermont, where he’s consistently outperformed Democrats and won big in conservative areas with lower levels of education and income.

Sanders would likely still struggle in these areas against any Republican in a head-to-head matchup. But just as Trump may have a unique ability to peel off unexpected parts of the Democratic base — for example, a surprisingly large portion of mostly anti-Trump black Americans agreed in 2020 that “I do not always like President Trump’s policies, but I like the way he shows strength and defies the establishment” — it well may be only Sanders who can peel off enough rural Trump voters to make a difference.

If Sanders announces, the haters will come out of the woodwork. “He’s too old!” they’ll yell, about the preternaturally fit and energetic senator who works at an unceasing pace that staffers a fraction of his age can’t keep up with. This man just pitched a strike on a regulation-size minor league baseball field on his first try, for Christ’s sake.

“The Democrats mustn’t nominate another white man!” they’ll say, ignoring that Sanders would be the country’s first Jewish president, a fact of great symbolic importance in a time of rising neo-fascism that’s seen synagogues targeted with violence. In a country where only one Jew each has ever served as the GOP nominee and a Democratic running mate, and only one — Sanders himself — has ever won a presidential state primary, his nomination would be no minor milestone.

“He’s already lost twice!” they’ll shout. Yes, and so what? It took Ronald Reagan three tries to win the Republican nomination, and that third time, he too was plagued by doubts about his age. Yet he won the nomination and served two terms as a transformational president, shifting culture and the elite political consensus away from the New Deal era and into the neoliberal one.

Sanders has the potential to be that same kind of transformational leader, only in the opposite political direction, reversing the Reagan-led drift toward greed and working class immiseration. Anyone the least bit familiar with his years as Burlington mayor should know the kind of things Sanders can do with even a weak executive office, a bully pulpit, and a movement of people behind him. A Sanders presidency would be an uphill battle, but it would at least be a battle.

As the senator himself has acknowledged, the past year and a half has shown the limits of today’s corporate-captured Democratic politics, and its attempts to accommodate and balance the interests of the powerful few against the needs of the many. The United States today is an arena of asymmetric class war, where those at the top pour their bottomless wealth into pitiless campaigns to seize whatever they want and however much they want of it, and their nominal opposition simply asks them nicely to give a little bit back, which they of course refuse.

If Sanders runs, the worst outcome is one more unsuccessful but inspiring campaign that shakes up the country. And the best outcome? Well, maybe just for once, the working class might actually start winning that class war. (IPA Service)

Kashmir Searching For Its Magic Amid Tourism Boom & Targeted Killings