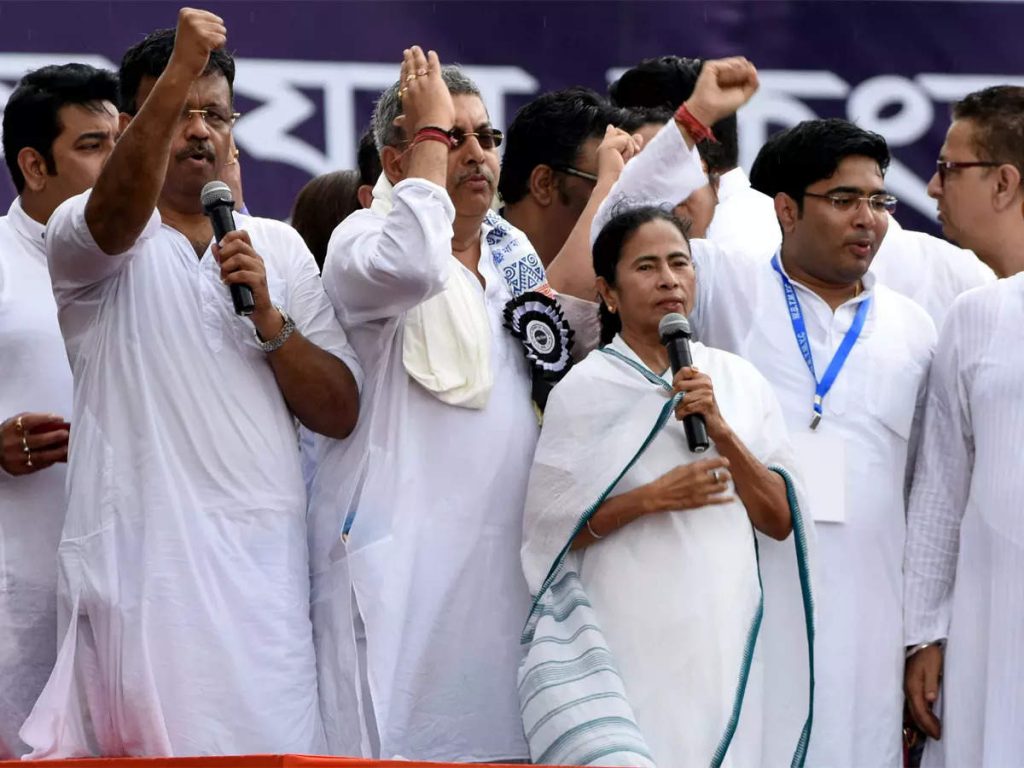 Given Bharatiya Janata Party’s goal of becoming the ruling dispensation in West Bengal, the saffron camp has put its best foot forward in the state even when it is in a twilight zone. The areas of darkness are formed by successive electoral defeats and desertions while some passages in its path are lit up by some of the Trinamool Congress leaders being summoned by probe agencies on alleged corruption charges while a few find themselves behind the bars

A stumbling block in BJP,’s way to emerge from the Opposition benches and become the new ruling party is Trinamool Congress supremo and chief minister, Mamata Banerjee who happens to be the principal vote catcher and the most credible face of the ruling party. On the other hand, not only the state BJP lacks a single credible face which can be projected as a chief ministerial candidate, it remains till date a divided house.

Even as BJP is on the job, it has to accept that it is no cakewalk for the principal Opposition outfit in the backdrop of its smarting under a series of electoral reverses since 2021 state Assembly polls. The BJP leadership is telling its supporters that winning in West Bengal elections is very much on BJP’s electoral radar with 20-odd seats in 2024 parliamentary polls and a much improved electoral performance in panchayat elections scheduled in early 2023.

Having captured 18 seats in 2019 parliamentary polls and giving the the Trinamool Congress a hot chase to the seat of power, the saffron camp was upbeat about its chances of pipping the ruling party to the post in 2021 polls. But the state assembly polls held two years later exposed the inadequacy of the state BJP’s poll machinery.

Desertions apart, a humiliating defeat in Kolkata Municipal Corporation election followed by a string of electoral reverses especially in Asansol by-election in which Shatrughna Sinha, once in the saffron fold emerged as the victorious Trinamool candidate with a margin of . three lakh votes were clear pointers that the saffron camp organisation’s inability to get its act together.

Aware of these shortcomings, the central BJP leadership has rolled out a grand game plan of revival to seize the reins of power from Trinamool. And it is not quite at variance with the strategy of 2021 assembly polls following which a clutch of senior leaders flew to the state from the National Capital on an almost daily.

Only this time, it would not be Prime .Minister, Narendra .Modi and Union home minister, Amit Shah crowd pullers in their own rights. It would be senior organisational leaders not short on charisma who are scheduled to criss cross West Bengal to shore up the morale of the party rank and file.

As part of the attempt to brush away the memories of the electoral reverses a new people’s outreach programme is on the cards. To achieve this end, leaders like Jyotiraditya Scindia, Rajkumar Ranjan Singh, Ajay Bhatt, Rameshwar Teli and Hardeep Singh Puri will tour West Bengal to find out the issues the people are aggrieved about.

The leaders will home in on 140-odd constituencies which by no stretch of imagination can be stated to.be BJP strongholds. It would-be on the BJP leaders priorities to assuage the feelings of local party supporters singed by post-poll violence and nursing a grouse against the leadership that it did not stand by them against Trinamool attacks on their hearth and home.

Consolidating Hindi-speaking voters is also on the agenda. This is part of a strategy of herding voters who some leaders of the saffron camp consider to be their core supporters.

Given the string of programmes of protest against Trinamool Congress government, it is clear that it is facing an anti-incumbency factor in its third term of office. But the fact remains that the feeling is not yet widespread among the people that BJP is a credible alternative.

This is where the presence of touring BJP leaders is expected to make a difference between similar efforts of their predecessors. If they can make a strong pitch for their party and establish it as an alternative to Trinamool, some favourable results can be achieved.

But grandiose. plans of the central BJP do not quite gel with the state of affairs of the party’s West Bengal unit. Intra party strife is barely concealed.

Some of the leaders of the old guard are wary of newcomers. If former state party chief and Kharagpur MP, Dilip Ghosh who gracefully handed over his baton to his successor Sukanta Majumdar, the latter is yet to consolidate his position in the party.

Another BJP leader, Anupam Hazra got away after passing derogatory remarks about the state party chief. On the other hand, Jai Prakash Majumdar an old BJP hand found himself in the wilderness and then in the Trinamool camp after stepping out of line.

State BJP chief, Majumdar has recently given a call to all Opposition outfits including the Left and the Congress to close ranks with his party against ruling Trinamool. Majumdar’s call does not display much confidence in his own party’s ability to take on the state’s ruling party. The call has sent a wrong message to the BJP cadres as if the party admits its inability to face the Trinamool on its own.

Unless a self correction course is soon charted and set upon, it will be a tall order for the state BJP to hope for a better political fortune. Otherwise, neither game plans nor tours by party heavy weights will pump adrenalin into the leaders and the activists during the campaign trail for the coming panchayat polls. (IPA Service)

Gujarat Is A Favourite Of Centre When Mega Projects Are Involved
Posting....