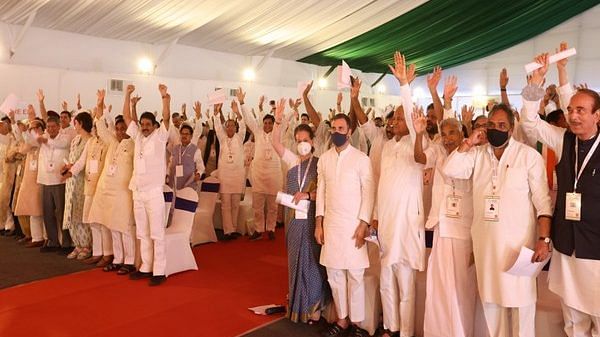 LUCKNOW: After Udaipur Chintan Shivir,   the Congress in Uttar Pradesh is looking forward to massive revival plan to face 2024 Lok Sabha polls. There are indications that armed with the decisions taken at the Chintan Shivir the party high command is contemplating significant changes in state Congress to revive the party in the state where the party is out of power since 1989. State Congress would soon have new president and other office-bearers with majority being under 50 years of age to give the organization a young look.

It may be mentioned here that Chintan Shivir decided that all posts from block level to Pradesh Congress Committee would be filled within 90 to 120 days. Senior leaders disclosed that party was also planning to have election management committee. This committee would manage polls. To keep in touch with people’s issues for elections Congress is to set up public affair committee. This committee would have big responsibility to keep track of all major issues affecting day to day life of people. Udaipur Chintan Shivir also emphasised on proper training of the cadre for which a separate centre would also be set up where experts would be called to interact with party workers.

State Congress is also looking forward to proper implementation of the decisions of Chintan Shivir like connect with the people, agitate on the street and usher in the organisational reforms.   State Congress leaders are waiting for AICC general secretary Priyanka Gandhi to visit state capital and take lead in implementing the decision of Udaipur Chintan Shivir but on there is simmering discontentment also in state leaders for not being invited at the Shivir.

Several leaders are upset as to how come party adopted pick and choose policy regarding invitation for Udaipur Chintan Shivir. Senior leaders like former state presidents Nirmal Khattri and Sriprakash Jaiswal were ignored while  the new entrants were called for discussion.

Congress has prepared 16-page application for those seeking tickets. Party has also fixed certain standards for giving tickets for local bodies elections. Only those who would meet the criteria set up by the party would be given tickets. More meetings would take place in other zones to sensitise people regarding local bodies polls.

Since Congress faced worst performance in 2022 assembly polls with almost two per cent vote share and two MLAs it would be very difficult task before party high command and Priyanka Gandhi to revive party adequately to face 2024 Lok Sabha polls, but still they will do their best. (IPA Service)