Assam Can Be A Good Conduit For Expanding Trade With Bangladesh 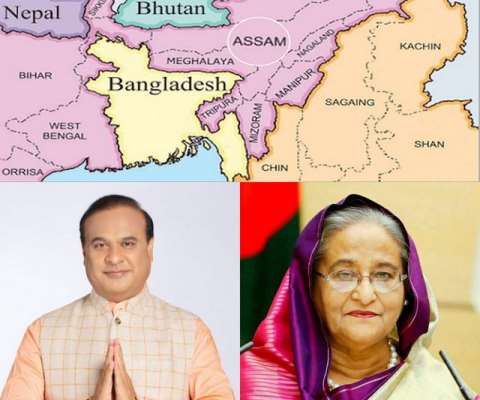 Bilateral trade between India and Bangladesh may have increased steadily in recent times but transactions involving the northern areas of Bangladesh and Northeast Indian states have not really taken off. Progress remains slow despite recent official efforts on both sides to increase overall business turnover, by generating more trade between Bangladesh with Tripura and Meghalaya states.

Assam, the biggest state in the region has proved a mixed proposition .The traditional wariness in Assam, about Bangladeshis in general — an inevitable product of Assam’s own historical development — has been hard to shake off. By extension, the term ’Bangladeshis’ in Assam often means people who had crossed over from erstwhile East Pakistan and ‘Bengalis’ in general, in times of passion. Bangladeshis are also well aware of Assamiya reservations about them. Such a situation is hardly conducive towards the healthy growth of closer regional cultural/economic ties.

Currently there are signs that both sides may be more interested to overcome the present stalemate. Observers have taken note of some positive moves made by leaders both in Bangladesh and Assam specifically, to increase cross border trade and economic exchanges. There have been occasional visits to Assam by Bangladeshi Ministers and diplomats. Bangladeshis have been participating in fairs and gatherings in Assam where garments and handicraft are sold and the Assamese have done the same for similar events in the neighbouring country.

Bangladeshi Prime Minister Sheikh Hasina and Chief Minister of Assam Mr. Himanta Biswa Sarma have both called for closer ties and cultural/economic exchanges, at different official fora . Earlier this year, during summer, Bangladesh sent a special gift of quality mangos and sweets to India — more specifically to Delhi, Kolkata, Guwahati, among other destinations, to the Indian Prime Minister and Chief Ministers.

But perhaps a stronger indication of the changing times has been recent articles by Bangladeshi experts about the need for a closer contact between Assam and Bangladesh, carried in the Guwahati-based media. A few years ago, this would have been unthinkable. — more on this later,

However, the unusually long and sustained aggressive campaign of major Assamiya organisations like the Asom Sahitya Sabha, the AASU and the AJYCP against what they describe as an “unceasing illegal infiltration of Bangladeshis” has left a toxic legacy .Harsh words and bitter sentiments about issues relating to Bangladesh expressed from the highest political/official levels as well as in the mainstream Assam-based media have not helped matters .

As stated before because of Assam’s own history during the British times and the migratory trends seen post 1947 have been the prime factor for the present situation. In short the comparatively smaller Assamiya population acutely feels the pressure of the larger Bengali population in the region, regarding it as an existential threat.

Rightly or wrongly, Bangladeshis(Bengalis who came over from East Pakistan and later, Bangladesh) settled in Assam are regarded as an already sizable minority that poses a strong challenge culturally/politically to the ruling Assamiya establishment in terms its sheer weight in numbers..

A general sense of unease gets reflected at many levels of Assam/Bangladesh interaction, especially at the official level. Until recently, Bangladeshi diplomats/officials hardly interacted with the mainstream media in Assam, let alone going in for any image building exercise. .

Some years ago, during one such rare — and brief — interface between a Bangladeshi diplomat and Assamiya mediapersons, the unbridgeable divergence of views on sensitive issues came to light.

The diplomat was asked whether Dhaka would take more stringent steps to stop the illegal movement of Bangladeshis, a major problem plaguing Assam over the decades. The presence of millions of mostly dirt poor settlers added to the economic burdens of a relatively smaller Indian state.

Prompt came his reply : Since Bangladesh came into being only in 1971, Dhaka was not in a position to talk about what had happened decades ago. But his Government was quite prepared to deal with any major issues that might have developed after 1971, no matter how serious.

As for Bangladeshis entering into Assam or India illegally, there is now in place a bilaterally accepted procedure: It was for Indian/Assam agencies to round up and present suspected illegal settlers to Dhaka authorities. They in turn would verify/check their alleged Bangladeshi origins before accepting or rejecting them as its citizens!

The element of mutual reserve extends to other levels as well including cultural initiatives. A couple of years ago, at an annual fair, Bangladeshi garment sellers put up a few stalls, with specimens of high quality Tangail sarees and other items on offer. But sales remained low. Disappointed, the stall owners said they would not participate in such fairs anymore!

Given this background, it has been revealing to see in Assam media special write-ups from Bangladesh arguing the case for closer ties with Assam and the major mutual benefits this would bring to the region as a whole.

Interestingly, the approach of one Bangladeshi writer was not defensive at all. Quite the reverse: Assam, he reasoned, should be grateful to Bangladesh. By throwing out former ULFA militants from its territory and handing over hardened insurgent leaders, Dhaka had already won earned high praise from GOI for contributing to the better security of the entire NE region, and of Assam in particular. It had frozen bank accounts run by major Indian insurgent leaders/organisations and seized their assets, to help India and for the sake of lasting regional peace and harmony. Clearly Bangladesh had done Assam a major favour.

Bangladesh, he added was already an economic powerhouse in the region. It had much to offer to the NE states. By way of connectivity, NE states including Assam could use the waterways and the new ports Mongla and Chalna to carry their exports to ASEAN countries and beyond.

By road too, now that transit rights were operative bilaterally, Assam-based entrepreneurs could access Myanmar/Thailand areas not to mention the Bay of Bengal. The NE region could overcome the economic limitations of being landlocked, following the example of Nepal. Both Bhutan and Nepal were seriously considering the use of Bangladeshi roads/waterways and its new ports, in addition to special facilities they already enjoy in the Kolkata/Haldia ports.

Such improved connectivity would help Assam and the NE to expand their economic horizon, ease international access and avoid the delays/higher costs involved in operating through the narrow Siliguri corridor to reach India’s mainland states as of now. .

Tourism could develop in a major way.  The beaches and hills at Chittagong , not to mention the scenic Sunderban mangroves/small islands should attract middle class/affluent tourists from the NE region giving them a choice between the scenic Cox’s bazaar area/ St Martin’s island and Goa/Puri.

Other sources said In terms of exports/imports, bilateral trade and commerce, bigger volumes of business could be achieved through the Cachar/Sylhet and Dhubri/Goalpara areas. The ICPs (Integrated checkposts) operating there, could be improved/upgraded.

As for pending issues/problems, official negotiations and agreements wherever possible, were the only way to go forward. The strong Bangladeshi middle class/rich would well be travelling to Nepal and Bhutan through Assam and the NE states. They could be interested in Assam-made garments, the rich variety of different layers of tribal culture and handcrafts of Meghalaya, Manipur or Nagaland. There could be major exchanges in expanding the bilateral food culture. (IPA Service)