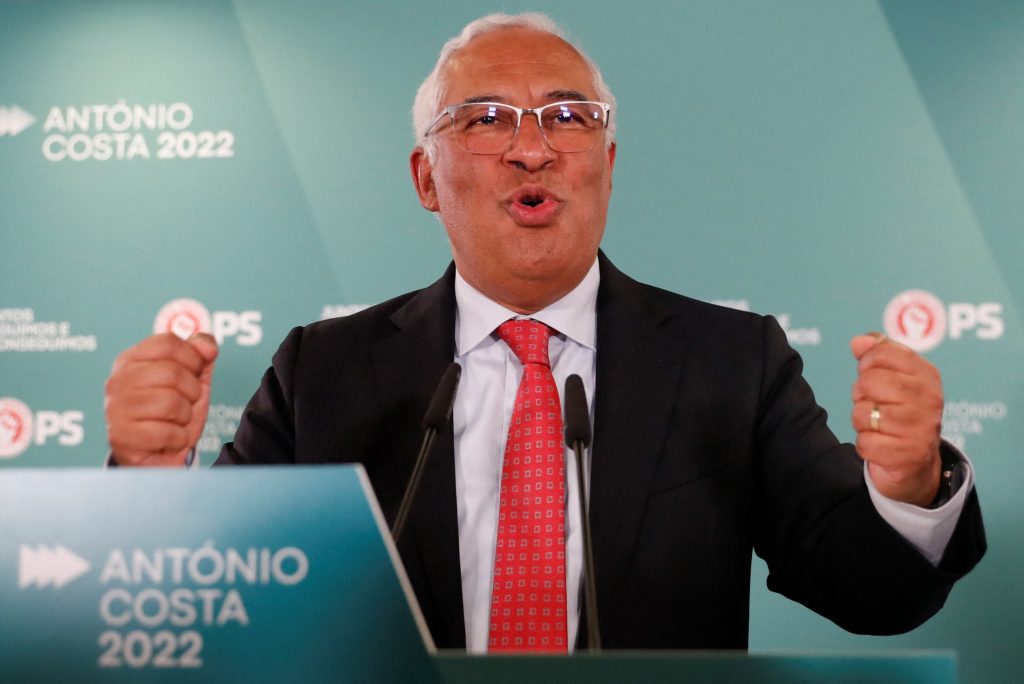 Portugal’s centre-left Socialists led by the Prime Minister Antonio Costa won an outright parliamentary majority in Sunday’s snap general election defying all latest projections in the opinion poll. The slim majority in the 230 member Parliament is a big booster for the PM Costa who defeated both the ruling party’s main contender the centre-right Social Democrats and his earlier coalition partners the Left Bloc and the Communist Party.

Prime Minister Costa made use of the election campaign as a sort of referendum in his favour promising to give a stable government in Portugal under his leadership. In October last year, Costa led coalition was defeated in the house when the supporting parties Left Bloc and the Communist Party withdrew support on the issue of some of the anti-labour provisions in the budget Costa went for the snap poll but he was only hoping to improve on his strength in the new Parliament after the January 30 poll, he was not confident about getting a majority as the Portuguese voters are sharply divided on party lines.

After last week’s opinion polls Costa had himself acknowledged that Portuguese did not want to give him a full majority and said he was prepared to strike alliances with like-minded parties but the results now show that his Party would not need support from other parties. Trends so far give Costa’s Party around 118 seats in a house of 230. The Social Democrats lost seats as also the Left and the Communists, the coalition partners of the erstwhile Costa led government. Trends show that the Left strength has gone down by about 50 per cent in Parliament.

Costa became Prime Minister in 2015 in the wake of acute debt crisis faced by the country. He steered the economy through   a long crisis period in terms of unemployment and poverty but at the end of 2018, Portugal saw good recovery under his leadership. The European Union also appreciated his tackling of the problems in this perennially low income country. Despite getting lot of funds, the economy faced newer problems during pandemic though the economists praised Costa’s firm handling of the post pandemic crisis period.

Reports say that EU officials are excited that the new government under Costa will be free now from the pressure of the Left and his stable one party government will be able to implement the package more forcefully in cooperation with the EU.EU is considering a 16.6 billion euro package for rebooting Portugal’s economy. The EU headquarters have already contacted Costa administration and talks soon will start for facilitating the package.

The January 30 results have given a big jolt to the Portuguese Communist Party. The PCP had ten seats in the earlier Parliament and the Left Bloc another 11. With these 21 seats, the Left as a whole gave lot of pressure on Costa government in changing policies in favour of the working people. Some positive measures were possible and the Left took credit for that. The Communist leaders in their speech on withdrawal in Parliament mentioned of the party’s commitment to the working class and how the Costa Government ignored the Portuguese labour in its interim budget provisions. Costa government stuck to its budget provisions and the Left votes against the budget resulting in the defeat of the Government.

Following the latest poll results, an intense debate is going to take place  in the PCP as also the other left bloc constituents whether the withdrawal decision to the government in October 2021 was a correct one and whether the centre right social democrats it really served the interests of the working class. Though the centre right  social democrats came a distant second at below 30 per cent of the vote as against the Socialists 42 per cent, the far right Chega has emerged as the third largest parliamentary group with around 11 seats as against only one in last parliament. Thus the far right has taken the position of the Left as the third biggest force in Portuguese politics now displacing the Left.

The PCP leadership has to make detailed analysis now about the reasons for this electoral debacle in the latest elections. Ever since the fall of the Salazar regime, the PCP has been an important part of the process of political churning in Portugal. There have been twists and turns in its relationship with the Socialists. This time also, the PCP and the other left parties have to look afresh at their role under the majority socialist government of Antonio Costa. (IPA Service)

Myanmar Junta Faces Increasing Resistance At The End Of One Year Of Coup
Posting....