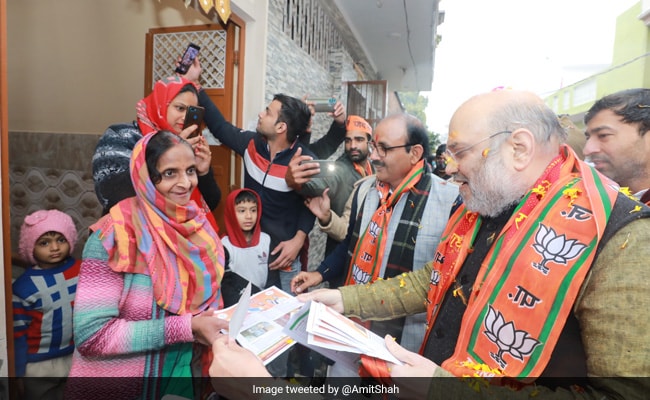 Amit Shah has returned to the forefront of Uttar Pradesh assembly polls campaign with a visit to Karana. He descended in Kairana with the mission to prepare the ground for the BJP to win the 2017 assembly election and also to trounce the 2019 lok Sabha election. The BJP created the phobia that large scale Hindus were murdered and lakhs of them flee the city and surrounding areas after the 2013 worst communal riots that ravaged Muzaffarabad and Kairana.

On the first day of campaign he while putting the spotlight on the much publicised exodus of Hindus from Kairana during 2013, Shah recalled the incidents which actually had not taken place. Shah was awfully busy igniting the communal hatred and ill-will. Significantly while Muslims are the majority community and has a population of around 29 percent, Shah preferred to visit Hindu families hit by ‘exodus’.

He did not hide his obnoxious design: practicing divisive politics, His message was loud and clear that Modi government is for the Hindus. Apparently his visit was aimed at campaigning for the UP assembly election, he had his hidden agenda. His primary focus has been on projecting Modi as the messiah of Hindus. Very tactfully he does not give the impression that electoral ground ought to be prepared for Modi. Post farmers movement the current situation is not congenial for Modi. They still nurse the view that Modi has killed the 800 odd farmers in Delhi Satyagrah. They are not in the mood to pardon.

In fact the recent security incident of the prime minister is being interpreted as a part of this machination to win over the trust of farmers. But this has boomeranged. In fact the people of the western UP are quite hostile to BJP. Which is why Shah has been pursuing slow but steady process of appeasing the Hindus. Shah took to door to door campaign as this move is unlikely to be opposed and question by the people.

But it is his content and approach that he exposed his move and the malicious intentions behind his move. Large scale Hindus have refused to subscribe his clarification offered by Shah. The villagers outright deny to believe him as the two key conspirators and active participants in the pogrom continue to accompany him. The people , especially the Muslims, of the area could not forget how these two leaders enacted most heinous nature of slaughter. Incidentally the two goons later became MP and MLA

The resolve to bring back the Hindu voters who were alienated from the BJP during the farmer’s movement and had launched anti BJP movement is so intense that Shah along with the party leaders and cadres has been treading the rain drenched lanes and by lanes of Kairana He was distributing pamphlets mentioning the achievements of the BJP government. Amit Shah is not willing to take a chance. He is sure the situation may not turn favourable during the next 2o days before the assembly election, but it would turn rise for caste violence and politics of hatred by 2023, well before the Lok Sabha elections.

This is the first political programme by Shah in Uttar Pradesh after the assembly poll dates were announced and the choice of Kairana is significant. The BJP leaders confide that Shah will hold many such rallies in the communally sensitive areas. In the recent election rallies, the party’s top leaders have been deliberately raising the issue of Hindu exodus while they claim an improved law and order situation in the state under the Yogi Adityanath government. If then law and order has improved then there is no need for creating panic among the people.

In fact this is the part of the conspiracy laid down by the RSS and BJP. While the issue was used in 2017 as a polarising factor, Shah is following in the same foot print. In fact Shah is terrorise and panicky the Hindus. Though Muslims in Kairana are 20 percent of the total population he has been desperately projecting Kairana’s Hindu exodus as an ‘eye opener’. At a public rally in Allahabad, and he later cautioned that “UP should not take Kairana lightly”. The BJP leaders in quest to panicky the Hindus, other Kairana may happen and there is a need to find out about “other Kairanas”. It is clear from these statements BJP leaders are determined to ignite communal clashes in the region.

In 2017 the worst condemnable role was played by the National Human Rights Commission. The BJP leadership has mastered the art of misuse of the state machinery. This is the primary reason that it is desperate to win the election at any cost. RSS and BJP have come to know that without power they have no worth in Indian politics. The NHRC report had put the blame on the Muslims. The NHRC report on the ‘Kairana exodus’ raises questions about its remit as an unbiased arbiter in conflict situations. While the state government and district administration had denied incidents of exodus, even some investigative reports by the media, notably in The Hindu, The Indian Express, Hindustan Times and Quint, also exposed these claims The BJP continued to stick its allegation. The NHRC report was found to be exaggerated and false.

The BJP has also been using its various legal forums and NGOs to malign the Muslims. It is also interesting to see that their please and allegations are promptly entertained by the lower court and police. The best example has been Delhi riot. After more than a year it now transpires that most of the cases filed against the MUSLIMS were false and fabricated. Recent probes revealed that the Hindu criminals enjoying the government patronage were actually involved in the crimes in which 52 persons were killed. Strange enough the NHRC investigated the exodus of 346 people and presented it as a massive exodus. This action of the NHRC reminisces its action of killing of BJP cadres post assembly election of 2021, It is sad that NHRC has not substantiated its probe and findings. It simply misled the people and tried to create an atmosphere in favour of BJP.

Shah has been given the task of overseeing the party’s preparation and campaign for upcoming assembly election. In fact his door to door campaign is aimed at creating suspicion between the Hindus and Hindus who have succeeded a very gregarious relation during the farmers’ movement. Some BJP cadres and RSS pracharaks would be presenting his campaign in distorted manner. Haunted by this fear some Hindu have suggested to Shah meetings in the open. The meetings would be held in the presence of the Panchayat members. Meanwhile some Hindus have also approached the farmers leaders to ensure that Shah does not misuse social ambience

Of the 1.7 million- plus voters in Kairana, over 3 lakh are Muslims and 1.5 lakh are scheduled castes from the Jatav community, considered the traditional vote bank of the Bahujan Samaj Party. Shah will be actively campaigning in the state. Though in the last election the BJP has not fielded any single Muslim as its candidate. But this time in order to strengthen caste equation focus attention on 40 per cent of the backward caste voters, excluding the Yadavs, Jatavs and it would be converging on the Muslims. BJP distancing the Muslims has made other OBCs sceptical of its intentions. (IPA Service)