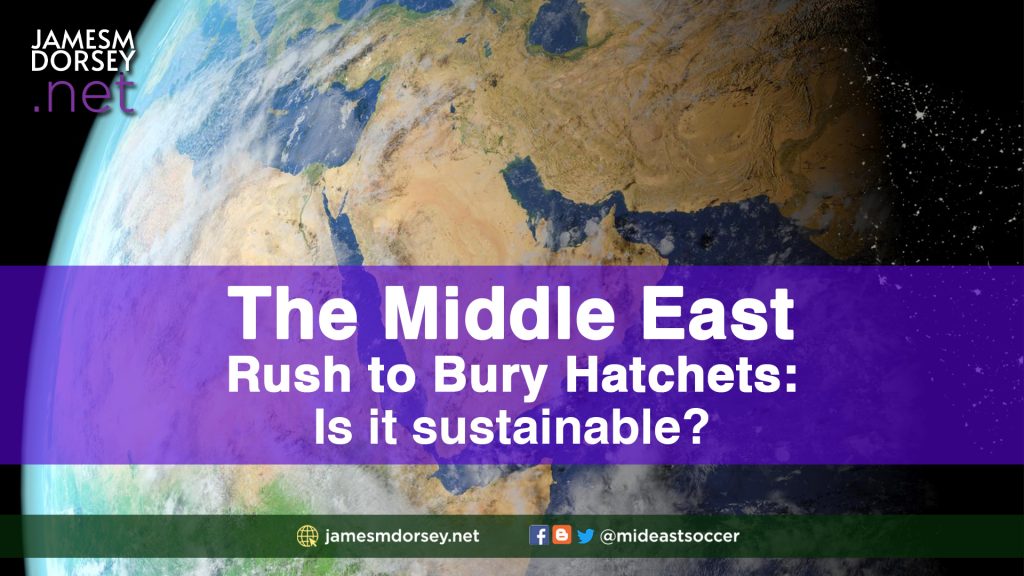 How sustainable is Middle Eastern détente? That is the million dollar question. The answer is probably not.

It’s not for lack of trying. Gulf states and Egypt have ended their debilitating 3.5-year-long economic and diplomatic boycott of Qatar. The UAE has moved at lightning speed to establish formal ties with Israel and repair relations with Iran and Turkey. Saudi Arabia is moving in the same direction, albeit in a more plodding manner. Meanwhile, Turkey is also seeking to repair its long-strained relations with Egypt and Israel.

Recently, Saudi Arabia granted visas to three Iranian diplomats to represent the Islamic Republic at the Jeddah-based, 57-nation Organization of Islamic Cooperation. In 2016, Saudi Arabia broke off diplomatic relations with Iran after its embassy in Tehran was attacked in protest against the execution of Saudi Shia activist and cleric Nimr al. Nimr. The recent granting of visas is expected to be followed by visits by officials to the two countries’ shuttered embassies.

To be sure, Middle Eastern states need a dialling down of tensions to be able to focus on reform, diversification, and growth of their economies. To achieve that, they need to project an environment of regional stability conducive to domestic and foreign investment.

An equally, if not more critical driver, is uncertainty and fear about the United States’ future commitment to Middle East security, with no obvious replacement for the region’s long-standing guarantor. The uncertainty is compounded by a fundamentally unchanged regional insistence on the need for a foreign security underwriter. The Gulf states lack confidence in their own capabilities and fear that a strong military could threaten the survival of dynastic regimes, giving countries like Turkey and Iran a strategic advantage.

If history is any indicator, Gulf uncertainty about US intentions may be exaggerated. A review of the last 50 years suggests that the Middle East has been there before, and nothing much has changed.

The US withdrawal from Afghanistan brings to mind the American withdrawal from Vietnam, after which South-east Asia and the Middle East fretted about the possibility of the United States walking away from its commitments. Similarly, the toppling in 1979 of the Shah of Iran, an icon of regional US power, caused heartburn in autocratic Gulf regimes – much like the popular Arab revolts in 2011, which toppled US allies such as Egyptian President Hosni Mubarak as Washington kept its distance.

To be sure, that was then, and this is now.

When America was defeated in Vietnam, and the Shah was overthrown, the Cold War had long settled in as a fact of life, unlike today’s US-China rivalry, which has yet to find its moorings and guardrails.

In some ways, what has changed is positive. During the Cold War, the Soviet Union and China sought to weaken and undermine US allies in the Middle East and supplant it as the dominant regional power. Today, they seek cooperation and share the goal of lowering tensions and introducing some degree of stability. The competition is economic, focussing on technology, arms sales, oil, and investment. There is little interest – if any – in Beijing and Moscow to go much beyond that.

Like the United States, neither China nor Russia wants to see a nuclear arms race in the region. ‘”The only player who can be effective and bring about progress in the Vienna debates is the only player we do not hear his position on the Iranian issue, and that is China… China’s influence on Iran’s policy is probably the biggest influence a foreign power has over Iran. At no point in history did China (have the opportunity to) make such a contribution to world stability as it has today in Vienna,” said Efraim Levy, the former head of Mossad, Israel’s foreign intelligence service. He was referring to talks in Vienna to revive the 2015 international agreement that curbed the Islamic Republic’s nuclear programme.

Détente in the Middle East would be fortified in an environment where the United States and China find common ground in their regional approaches. “There is considerable divergence between Chinese and US approaches to the Gulf, but the interests of the two powers are largely compatible. Both want a stable region that supports their strategic and economic concerns. Given their deep cooperation with the Gulf monarchies and China’s influence in Iran, there is an opening for Washington and Beijing to coordinate their policies in working toward a less turbulent Gulf region,” said China-Gulf scholar Jonathan Fulton, writing in Middle East Policy.

Nevertheless, Beijing’s efforts to moderate Iran’s tougher negotiating stance since hardline President Ebrahim Raisi took office have not stopped it from enabling a ballistic arms race in the Middle East, in what Chinese scholars have described as a calibrated effort to maintain a regional balance of power. Iran has rejected US, Saudi, and Israeli demands to expand talks in Vienna to include ballistic missiles. US intelligence believes that recent satellite images show Saudi Arabia manufacturing ballistic missiles at a site constructed with the help of China.

Saudi officials said the Kingdom had built the manufacturing facility with the assistance of the Chinese military’s missile branch, the People’s Liberation Army Rocket Force. China has insisted that “cooperation in the field of military trade” did not violate international law or involve the proliferation of weapons of mass destruction.” The United States has long refused to sell ballistic missiles to Saudi Arabia.

Iran described the test-firing of 16 ballistic missiles of different classes during a military exercise in late December as a message to Israel. It was a response to Israeli threats to strike at Iranian nuclear facilities if the Vienna talks fail or produce a result that Israel deems sufficiently unsatisfactory to justify unilateral action. “Sixteen missiles aimed and annihilated the chosen target. In this exercise, part of the hundreds of Iranian missiles capable of destroying a country that dared to attack Iran were deployed,” said armed forces chief of staff Major General Mohammad Bagheri.

Beyond ballistic missiles, a breakdown in the Vienna talks with Iran could also ignite a nuclear arms race. Already, Israel has begun to imagine a Middle East inhabited by a nuclear Iran. “Even if global powers manage to revive the 2015 nuclear deal with Iran, diplomacy may only delay the inevitable… Given how resilient the Islamic Republic has proven to be, it seems that the world may eventually have to tolerate an Iranian nuclear bomb, just as it has learned to live with the Indian and Pakistani arsenals,” said former Israeli foreign minister Shlomo Ben-Ami.

Efforts by Middle Eastern rivals to dial down tensions and manage rather than resolve conflicts are fragile at best. Moreover, they raise the question of what the end goal is. For now, that appears to be primarily an endeavour to buy time, put their own houses in order, diversify their economies, and ensure that they remain competitive in the 21st century.

The sustainability of détente in the Middle East will ultimately depend on support from the United States and other major powers, including China, Russia, Europe, India, Japan, and South Korea. It will also be contingent on economic cooperation and trade, raising the cost of a return to conflict to the point that it outstrips the benefits of confrontation. (IPA Service)