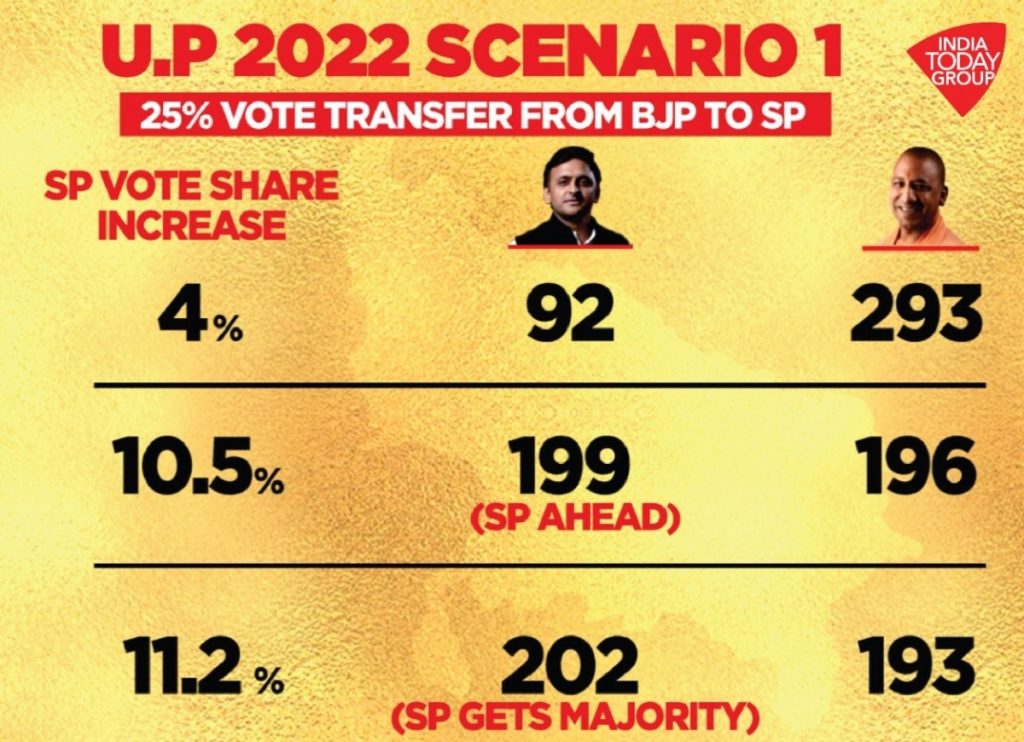 LUCKNOW: The polling in 58 assembly seats during first phase in Uttar Pradesh elections on February 10 will set the mood and trend for rest of the constituencies in UP.

BJP is more under pressure to retain its seats as it has won 53 out of 58 seats in last elections held in 2017 when BJP came to power with more than 300 seats in UP Assembly.

Of these 58 seats nine are reserved for scheduled caste and spread over 11 districts in Western UP — Shamli, Muzaffarnagar, Baghpat, Meerut, Ghaziabad, Hapur, Gautam Budh Nagar, Aligarh, Mathura and Agra.

It would be worth mentioning here that BJP had won 53 seats while Samajwadi Party and BSP two seats each and Rashriya Lok Dal could manage only one seat.

BJP was able to consolidate it’s position after the polarisation due to communal riots in Muzaffarnagar in 2013 and won maximum number of seats in 2017 and later in 2019 Lok Sabha Polls. The scenario in these 58 seats has certainly undergone change but to what extent, will be made clear after the polling.

Since these districts have good population of muslim community , they play very important role in deciding the fate of candidates.

Samajwadi Party had been getting support from muslim community since 1990 when Mulyam Singh Yadav ordered firing on karsewaks to protect the Babri Masjid , The SP  performed well in 2012 assembly polls.  When the SP formed the state government with majority of the seats.

Farmers agitation last year  has brought hindu and Muslim   people  on one platform and succeeded in minimising the communal divide which boosted the morale of Samajwadi Party and Rashtrya Lok Dal and their leaders former chief minister Akhilesh Yadav and Jayant Choudhry grandson of jat leader and former PM late Charan Singh.

Since stakes are very high for BJP in the first phase, all the senior leaders including BJP national president JP Nadda, Union Ministers Amit Shah Rajnath Singh CM Yogi Adiyanath and others are involved in door to door canvassing. No wonder they are raising the issue like fight between Mughals with jats, abba Jaan, temple at Mathura, reminding past communal riots to polarise the voters in these first phase.

The desperation of BJP leaders in present scenario is evident from the offer given to RLD chief and jat leader Jayant Choudhry to join hands. They also hinted post poll arrangement. But they were disappointed with Jayant Chiudhry publicly refusing the offer and making fun of it.

Significantly the combination of young team of Akhilesh Yadav and Jayant Choudhy is attracting huge response in jatland from masses. People were seen waiting for hours to see these two young leaders.

On the other hand former chief minister Akhilesh Yadav with alliance partner Jayant Choudhry are talking about farmers agitation and raising their issues, unemployment and mishandling of migrant labours issue during pandemic and mishandling on covid which resulted in burial of bodies on the banks of holy river Ganga.

Congress leader Priyanka Gandhi who has taken lead in reserving 40 seats for women is campaigning herself door to door and using digital media raising the issues of farmers, insecurity in women, growing unemployment, fake encounters and bad governance of Modi and Yogi governments.

Significantly, BSP national President Mayawati started her campaign from City of Taj Agra which had been her stronghold. Wayback in 2007 elections   BSP had won good number of seats in this region and came to power on its own and formed the government.

Mayawati is banking on support of dalits and brahmins to repeat the magic of 2007. Although Mayawati was not seen active on any public issue during last five years but late entry in assembly polls and playing aggressive brahmin cards has surprised her political rivals and political commentators as well.

Significantly enough Asauddin Owasi of AIMIM has also fielded his party candidates in predominantly   muslim constituencies. The mood and behaviour pattern of minority community will decide the fate of these constituencies. But indications are there that the muslims in general are bent on voting the opposition party which has the best chance to defeat BJP. (IPA Service)