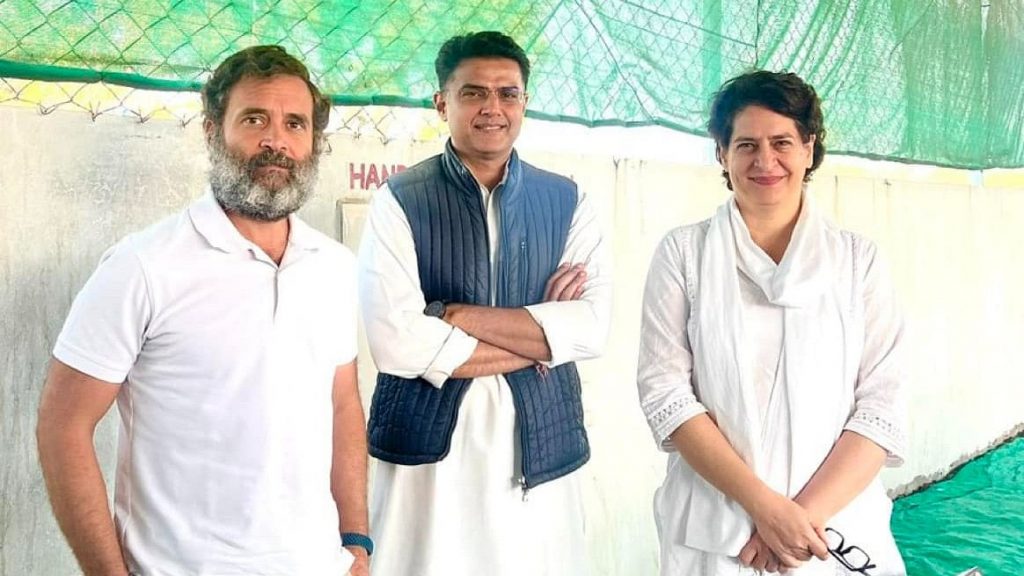 Former deputy Chief Minister of Rajasthan, Sachin Pilot, is now again in the limelight. After Congress snatched Himachal Pradesh from under BJP’s nose, the party wants to deploy him extensively in campaigns across the Hindi-speaking states like Chhattisgarh and Madhya Pradesh, in addition to Rajasthan. It’s notable that Pilot had addressed 18 rallies in Himachal Pradesh during the state campaign for the assembly elections, most of which attracted sizable crowds. Meanwhile, Congress MP Rahul Gandhi-led Bharat Jodo Yatra marked its 100 days on December 16, and people in Dausa, Rajasthan, raised slogans in favour of Sachin Pilot. Following the incident, CM Ashok Gehlot reportedly raised the matter in front of the Congress leadership and clarified that he is not going to bear such defiance in the state, especially during the Bharat Jodo Yatra. However, during the Yatra Sachin Pilot was seen wearing T-shirts with different slogans written on them, such as ‘Bekari se Rozgar tak, Aao Saath Chalein’ (From unemployment to jobs, let’s walk together). The idea behind the T-shirts was to highlight issues that directly influence people and would in turn shape electoral outcomes.

LOBBYING ON FOR BERTHS IN CHIEF MINISTER SUKHU’S HIMACHAL CABINET

Hectic lobbying for the ministerial berth in the newly-elected government led by Sukhvinder Singh Sukhu in Himachal Pradesh is still on, as several legislators of the Congress party make a beeline in Delhi before the party high command. Sukhu has asserted that the Cabinet would be expanded only after due consultation with the Congress top bosses, and that it would be a combination of professionals, youth and representatives from all sections. The Congress has won 40 out of 68 assembly seats, including 10 in Kangra, seven in Shimla, four each in Una, Solan, and Hamirpur, three in Sirmaur, two each in Chamba and Kullu, and one each in Mandi, Bilaspur, Kinnaur and Lahaul and Spiti district. All the regions have to be given equal and adequate representation. Meanwhile, the son of former chief minister Virbhadra Singh and two-time MLA from Shimla (Rural), Vikramaditya Singh, is expected to be included in the Cabinet.

Ever since Adesh Gupta, the Delhi BJP state chief who resigned from his post taking responsibility for the party’s defeat in the MCD, there have been rumours of a major reshuffle within the Delhi BJP unit. It is likely that a new state unit president could be appointed before 15 January 2023, in view of the Lok Sabha polls in 2024 and assembly elections to be held in 2025. Many have thrown their hats in the ring, including MP Manoj Tiwari, MP Gautam Gambhir and Parvesh Sahib Singh Verma, MP from Delhi, who are all are lobbying for the top post. Former Union Minister Dr Harsh Vardhan’s name is also making rounds for the top job. However, the BJP high command has been looking for a leader who can pose a serious challenge to the extremely popular Chief Minister and AAP supremo, Arvind Kejriwal, in Delhi. For now, the Delhi BJP vice-president Virendra Sachdeva has been appointed as the interim president.

Shivpal Yadav has conferred a new name to Samajwadi Party chief Akhilesh Yadav during the campaigning of Mainpuri by-election. Shivpal Yadav addressed Akhilesh as “Chhote Netaji” from the stage, a title reminiscent of and paying homage to the late Mulayam Singh Yadav’s ‘Netaji’. The sobriquet conferred by uncle Shivpal has become a superhit among the supporters, so much so that posters in the name of the young leader are being put up everywhere in the cities of Uttar Pradesh. Samajwadi Party MLA Amitabh Bajpai even had Akhilesh Yadav’s name as “Chhote Netaji” printed in a poster which was put up in support of Irfan Solanki.

KARNATAKA CONGRESS LOOKS FOR CANDIDATES TO FIGHT BJP IN 2023 POLLS

Ahead of the 2023 Karnataka assembly elections, the Karnataka Pradesh Congress Committee (KPCC) has started the process of selecting suitable candidates. KPCC has commenced the process of shortlisting them from among the ticket aspirants, who have submitted applications. KPCC president DK Shivakumar has formulated committees that will visit all the districts to shortlist a few candidates each and forward the list to the state party unit. Committee members have been instructed to only consider candidates who enjoy the confidence of the local population, and have the due recognition among the locals, giving priority to youngsters and women, who have a chance of winning elections. The committee members have been directed to commence holding meetings without any delay and send the shortlisted names to KPCC before January 1, 2023.

Ahead of municipal elections and the 2024 general election, Vishwanath Pal, has been appointed as the new president of the Bahujan Samaj Party in Uttar Pradesh, by BSP chief Mayawati. Pal replaces Bhim Rajbhar, who was appointed to the post in November 2020.Rajbhar has been assigned the role of coordinator in Bihar. This change of the state unit president is seen as the Mayawati’s strategy to receive the support of the extremely backward caste (EBC). The BSP is working on a Dalit-Muslim-EBC formula to crack the next slew of elections. Viswanath Pal belongs to the Gadariya community (MBC). Previously, he has been the chief sector coordinator of Ayodhya, Mirzapur as well as Prayagraj divisions. (IPA Service)