A month on, HP CM in Delhi for talks on cabinet formation 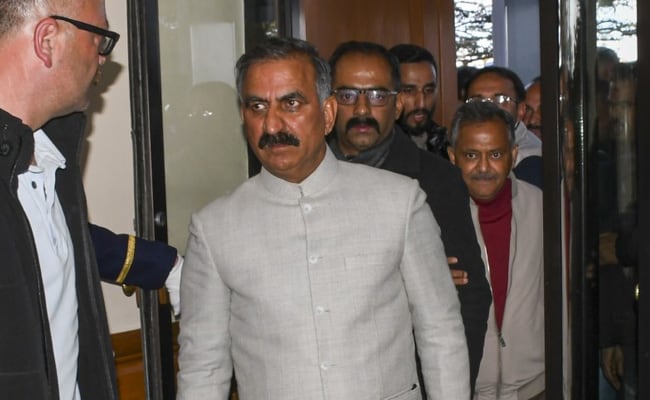 Almost a month after its victory in the Himachal Pradesh assembly polls, the Congress is yet to finalise names for the Sukhwinder Singh Sukhu cabinet even as the chief minister flew down to Delhi late on Monday evening to hold consultations with the party top brass not just on cabinet formation but for the Speaker and Deputy Speaker posts.

Sukhu dashed off to Delhi in the evening after inaugurating the winter carnival in Manali in the morning. With the three-day winter session of the newly constituted assembly scheduled to begin on January 4 in Dharamsala, the chief minister is trying to finalise the candidates for Speaker and Deputy Speaker as well.

Sources said that the Speaker has to be elected on the second day of the session which is January 5 and the CM is hoping to get a stamp of approval for the name by Tuesday when he meets the senior leadership.

Party sources said that what has made Sukhu’s job difficult was the “lack of interest” shown by MLAs for the two posts. “It seems that most of them are eyeing the cabinet berths and are not so keen for the Speaker and Deputy Speaker posts,” said a leader.

The chief minister is also expected to discuss the names of probable contenders for his cabinet. “He has a very arduous task on hand. Immediately, after the winter session, he also has to expand his cabinet. There needs to be a consensus soon on the cabinet formation as delays will add to fuel that there are differences over the names,” commented a leader.

Sources said that the chief minister has to tread carefully while choosing his cabinet since he has to take along all the lobbies within the party including Himachal Pradesh Congress chief Pratibha Singh. “There have been demands not just from the royal family but even from MLAs from Solan for cabinet berths. At this point in time people are more interested in the cabinet berth rather than any constitutional post,” commented a leader.

The CM, however, downplayed reports of differences over cabinet formation. While interacting with the media in Manali before leaving for Delhi he said that the Congress government had functioned smoothly for the past over 20 days and the cabinet would be expanded in due course. “All Congress MLAs were working unitedly for the development of the state,” Sukhu said.

He said that the state government was committed to fulfilling all 10 promises made to people in a phased manner. He added that the old pension scheme (OPS) would be implemented in the very first cabinet meeting.

The party will also be holding an “aabhaar” rally in Dharamsala ahead of the winter session for its recent victory in the assembly polls.

The BJP, meanwhile, has been attacking the Congress for its inability to put together a cabinet team.