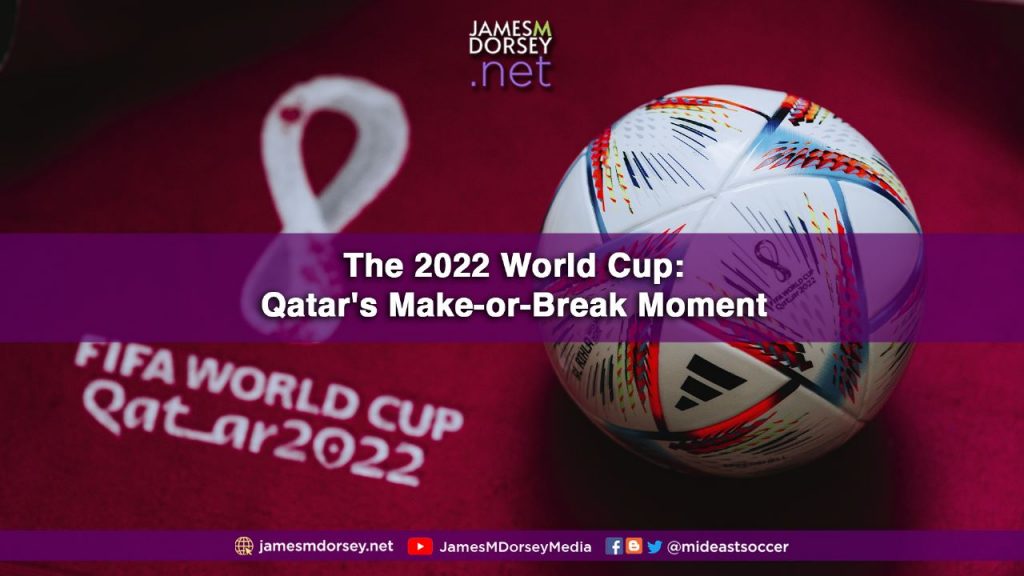 The jury is still out in contrast to Qatar’s success in meeting geopolitical challenges it faced in the 12 years since world soccer body FIFA awarded the Gulf state its hosting rights in late 2010.Reproducing its geopolitical success, achieved as much on its own steam as with the unintended help of its erstwhile detractors, the United Arab Emirates and Saudi Arabia, may prove easier said than done.

Ultimately, the primary litmus test will be how Qatar handles issues such as activists seeking to capitalize on the opportunity to make a point, potential fan rowdiness, and culturally sensitive issues such as intoxication, public expressions of affection, and sexual diversity.

Moreover, Qatar has suggested that World Cup fans committing minor offences such as public drunkenness or going shirtless in stadiums would escape prosecution under plans being developed by authorities. Following the example of several British cities, Qatar reportedly also intends to set up ‘sobering tents,’ a facility where intoxicated fans can sober up before being sent on their way with a warning but no fine or punishment.

Nevertheless, Qatar is sparing no effort to prepare for potential on the ground as well online disruptions. Qatar has invited security forces from Turkey, Pakistan, Morocco, and Britain as well as advisors from the FBI and France to bolster its capabilities. It has also invested heavily in cybersecurity.

To enhance fans’ experience and attempt to turn around the battle for hearts and minds that Qatar appears to be losing in the United States, Europe, and Latin America, but only in parts of Africa and Asia, the Gulf state is hoping to turn the World Cup into an extravaganza.

In the final analysis, how Qatar manages labour, social, ethical, and political issues that have cast a shadow over Qatar’s World Cup, despite Qatari efforts to work with its critics and significant changes introduced over the past decade, will determine the soft power cost/benefit analysis of the tournament’s impact on the Gulf state’s reputational capital.

If mega sporting events often leave a legacy of white elephants and debt, the Qatar World Cup already suggests that it will have a different legacy. That is true even though Qatar’s bid for the World Cup was simultaneously successful and a case of being in the wrong place at the wrong time. The Gulf state won its hosting rights when FIFA witnessed its worst corruption scandal.

Qatar never erased suspicion of wrongdoing despite its consistent denials, the lack of evidence, and a two-year-long FIFA ethics committee investigation that found no significant reason for concern.

Several suspicious dealings; internal FIFA politics involving Mohammed bin Hammam, a former head of the Asian Football Confederation (AFC) and member of the world soccer body’s executive committee who was banned from football for life; the rivalry between Gulf states; and sour grapes on the part of Qatar’s competitors, who had allocated a pittance to their bids compared to what the Gulf state invested, fuelled suspicion of Qatari bribery in its bid to win World Cup hosting rights.

At the same time, Qatar has been dogged by its links to Islamists as well as jihadists. Most recently, a US court case and a federal investigation put Qatar’s alleged ties back in the spotlight.

The family of Steven Sotloff, an American Israeli journalist beheaded in 2014 in Syria by the Islamic State, asserted in its petition to the court that prominent Qatari institutions had wired US$800,000 to an Islamic State judge who ordered the murder of Mr. Sotloff and another American journalist, James Foley.

Separately, US federal prosecutors have been investigating potential ties between militants and Sheikh Khalid bin Hamad Al Thani, a half-brother of Qatar’s emir. The investigation focused on whether Mr. Al Thani provided money and supplies to Jabhat al-Nusra or the Nusra Front, al-Qaeda’s erstwhile branch in Syria.

Similar allegations have been made in two ongoing lawsuits filed in London on behalf of Syrian refugees.

Qatar has consistently denied supporting political violence but like other Gulf states, including the UAE and Saudi Arabia, aided militants in Syria fighting the regime of President Bashar al-Asad.

Irrespective of whether one believes that reforms have gone far enough, the Qatari World Cup has accelerated, if not sparked, social change, particularly regarding the rights and labour conditions of migrant workers, a primary focus over the past decade.

Hosting the World Cup has also, at times, sparked brief debates on taboo subjects like citizenship and LGBT rights.

Moreover, in engaging with its critics and countering criticism, Qatar faced unique odds. These included a debate over genuine issues was blurred by a layer of prejudice, bias, misconceptions, sour grapes, and geopolitical infighting involving massive disinformation campaigns by its geopolitical distractors.

Bias and prejudice were evident in arguments early on that Qatar was too small and too hot to host a mega event and had no soccer legacy even though it had won in several international tournaments, including the Gulf Cup, the Asian Games, a West Asian Football Federation tournament, and the Asian Cup.

Some critics asserted that the Qatari investment in the World Cup was a waste of money because Qatar post-tournament would be unable to fill the custom-built stadiums.

With hotel rooms in Doha costing up to US$4,000 a night during the World Cup, cheaper options included a steel bed in a shared room in the desert at US$84 a night, or accommodation on two docked cruise ships from US$179 to $800. Barely a month before kickoff, Qatar hired a third ship from Geneva-based MSC Cruises, the 1,075-cabin MSC Opera. on which cabins started at $470.

Prices on the cruise ships were likely to drop when half the teams go home after the quarterfinals.

For Qatar, the choice was between catering to a demography that was important in shaping its reputation and the kind of investment in hospitality that made the most economic sense.

In the final analysis, Qatar appears to have decided that most World Cup fans would not be frequenting its hotels once the World Cup final was played.

That translated into an emphasis on accommodation geared toward premium travelers with those on more restricted budgets constituting an afterthought.

Planners could not have anticipated the Ukraine war, but Qatar’s misfortune was that the World Cup was about to take place at a moment that middle and working-class households across the globe were struggling with significantly higher energy and food prices and spiralling inflation as a result of the conflict. (IPA Service)