Yasin Malik Has Four Decades Of Political Experience As A Separatist 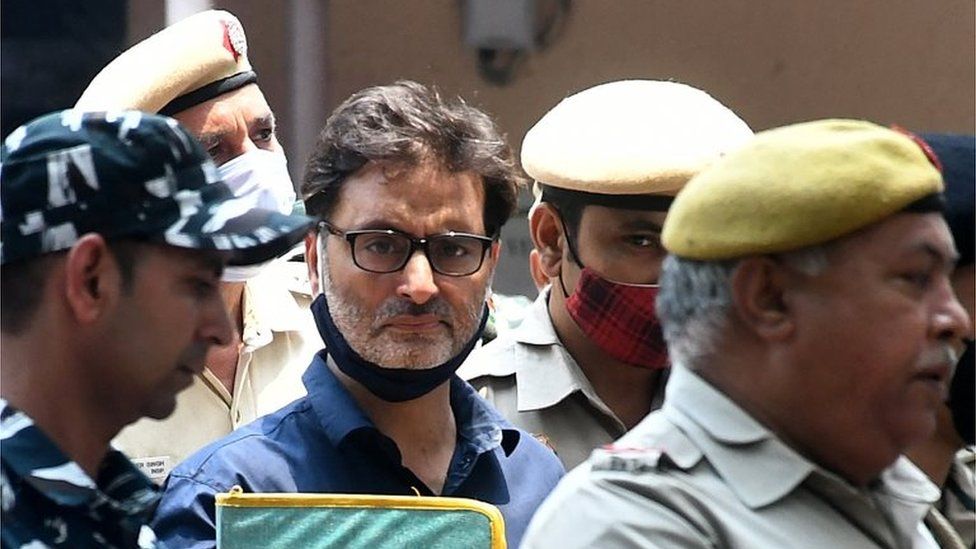 On May 25, a national Investigation Agency Court convicted Yasin Malik and sent him to two life terms. Malik is the leader of the Jammu and Kashmir Liberation Front (JKLF), which seeks independence for J & k from India and Gilgit-Baltistan from Pakistan. Apart from the two life sentences that will run concurrently, Malik has to pay a fine of Rs 10.65 lakhs for funding terrorist acts and violating the sections of the Unlawful Activities (Prevention) Act and the Indian Penal Code.

Malik’s conviction been hailed by some observers as a victory against separatism in Kashmir. The reality, however, is more complex.

Malik, 56, grew up at Maisuma, a densely populated neighbourhood in Srinagar and studied arts at Sri Pratap College, Kashmir’s oldest Institute of higher education. A violent altercation in Srinagar between cab drivers and security forces in 1980 provoked him to take the political plunge. He joined the Tala, a separatist group of mostly young people that stoked public anger by staging protest, such as the one in Srinagar in 1984 against hanging of JKLF founder Maqbool Bhat.

In 1986, the party renamed itself the Islamic Students’ League, and Malik became its general secretary. The league campaigned for the Muslim Mutahida Mahaz (Muslim United Front or MUF), a separatist coalition that challenged the dominant National in the 1987 assembly polls. But the elections were rigged, the NC retained power, and MUF leaders and supporters were arrested and tortured.

A year later, Malik was among first few group of men that crossed The Line of control into Pakistan for arms training, he returned as Commander of a J&K’s famed HAJY comprising Hamid Sheikh, Ashfaq Majeed Wani, Javed Ahmed Mir and Yasin Malik—that inspired hundreds of Kashmiris, to take up arms.

Malik was arrested in 1991, while fleeing from security forces during a raid at a safe house at Narwa in Srinagar. He jumped from top of the safe house and was injured. He was released on bail in 1994 after which he publicly vowed to adopt nonviolently means to achieve  his goal of settling the Kashmir issue. He was subsequently removed as commander of JKLF the group’ patron Amanullah Khan. But Malik, with his widespread support in the JKLF, retaliated by expelling Khan and taking control of the organization.

Sources say the ceasefire announced by JKLF` in 1994 was the result of the negotiations between Malik and Centre. The talks were broken by militancy to end and the ceasefire by the JKLF was a starting point.

Malik was issued a passport in 2001 and was allowed to travel to US for medical treatment. In 2003 after the umbrella body of separatists, the all party Hurriyat Conference split into two factions – moderate and hard liners—Malik went in his own way. He was part of the group of separatists leaders who travelled on bus to occupied Kashmir in 2005 to promote a peace deal between India and Pakistan. The deal fell through after its proponent, Pervez Musharraf, was forced to resign as Pakistan’s President. In 2007 Malik launched a campaign call Safar-e Azadi (Journey to freedom} to garner support for political Self-determination for the people of J&K.

The NIA arrested Malik in February 2019 months before Article 370 was abrogated. Malik is second JKLF leader after Bhatt to be convicted on terrorism charges. (IPA Service)

Both BJP And Congress Are Involved In Horse Trading On The Eve Of June 10 Polls
Posting....